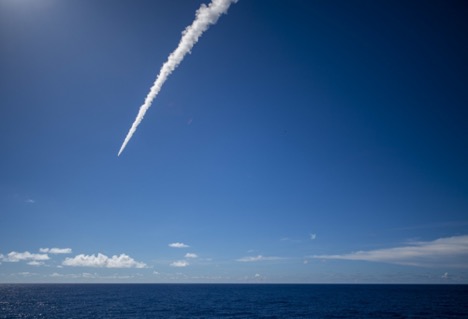 It’s time for the Royal Australian Air Force to consider how it can build the capability to defend Australia against the long-range, very high-speed threats being developed in our region.

The RAAF’s F-35A fighters should achieve final operational capability around 2023 and remain in service into the 2040s. A key task for Defence now is to build the long-range air defence system necessary to balance China’s growing standoff warfare capability.

Battle of Britain–style dogfights between fighter aircraft have long given way to beyond-visual-range engagements, in which stealth, electronic warfare and sensor capabilities are paramount. The F-35A is well equipped for air defence beyond the visual, but lacks the range and payload necessary to stay long in a fight. Yet long-range air defence is becoming even more important in the face of emerging standoff missile threats.

China deployed its H-6K bomber onto Woody Island in the South China Sea in 2018. From there it has the range to deliver land-attack and anti-ship cruise missiles against targets across Australia’s north. China is also developing an air-launched ballistic missile (ALBM). Artwork recently appeared in a government-run Chinese military journal of an H-6N bomber carrying what appeared to be an ALBM based on a DF-15 ballistic missile. Later, communist party mouthpiece the Global Times downplayed the story. China’s development of new long-range strike aircraft, including the H-20 stealth bomber and its rumoured ‘J/H-XX’ counterpart, would add to a complex threat environment.

Along with its development of a standoff strike capability, China is engaging in influence campaigns in Southeast Asia and the South Pacific that could provide it with access to airfields which in turn could bring Chinese fighter aircraft closer to Australia. Such a development would fundamentally alter our strategic calculus and compound our air defence challenge.

Australia is enhancing its air defences by networking its F-35s with its Aegis-equipped Hobart-class air warfare destroyers, its yet-to-be-built Hunter-class frigates and its E-7A Wedgetail early warning aircraft. The goal is to deliver a common operating picture under a ‘cooperative engagement capability’. That will make individual ships and aircraft much more effective than the sum of their parts, an incredibly important step forward for the Australian Defence Force.

An ability to counter standoff missile threats needs to be a priority, and that means detecting threats sooner and at greater range. Extending our sensor capability beyond that provided by the Jindalee Operational Radar Network to include greater use of spacesystems is one option. The US has already suggested that increased use of space-based sensors could be a way to deal with a growing hypersonic missile threat from China and Russia. Australia should seek to participate in the development of such a capability.

Air, sea and space networks must be integrated with ground forces as well. Defence’s AIR 6500 project will pull together the ADF’s many advanced command and control, air defence, air combat, communications and intelligence, surveillance and reconnaissance systems into an integrated air- and missile-defence network.

The challenge here, though, is that phase 2 of AIR 6500 doesn’t emphasise long-range missile capabilities and instead focuses on battlefield air defence and medium-range ground-based air defence. That seems to reflect a broader strategic mindset that eschews long-range military power projection and is inconsistent with emerging threat environments.

The ADF is putting most of these capabilities in place but needs to consider the next steps—to extend its operational reach and persistence. This is where the real problems emerge. A failure to develop a longer reach means the ADF will increasingly surrender the initiative to an adversary, particularly given emerging long-range missile threats to our northern defence facilities.

Australia is beginning to suffer the effects of a failure of strategic vision by capability decision-makers in the 1990s. Their decision to invest in short-range air power instead of long-range systems has shaped force development and is now generating a mismatch between the capabilities Australia has and those it would need to fight a major war.

In 2018, Paul Scharre of the Center for a New American Security told the US House Armed Services Committee that the US Air Force was poorly placed to confront Chinese area-denial weapons and expeditionary air power, because it was ‘still heavily weighted towards short-range tactical fighter aircraft and, under current plans, will remain so for decades to come’. The same can be said for the RAAF.

This oversight needs to be corrected quickly. Defence should consider increasing investment in advanced unmanned systems that can survive in contested airspace and extend the reach of existing short-range platforms. The stealthy Boeing MQ-25 Stingray, which is being acquired for the US Navy to undertake unmanned airborne refuelling missions, could boost the F-35A’s range and time on station without necessarily betraying its location like a non-stealthy aircraft, such as the RAAF’s KC-30 tankers, might. Adapting Boeing Australia’s loyal wingman concept to a long-range air defence role would also be a natural step if we want to extend the RAAF’s reach and enhance its responsiveness.

New strategic challenges are mounting in our region. The ADF has to be able to respond to threats more quickly and at a greater distance from Australia. That means it’s time to take a more ambitious look at how the ADF does air defence in the 21st century.

Image: US Department of Defense.