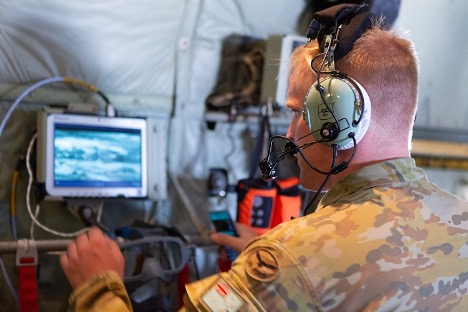 The RAAF has successfully demonstrated its ability to remotely control an unmanned aerial system (UAS) by piloting a Sky Ranger R70 quad-rotor UAS from a C-130J Hercules of 37SQN.

The trial was conducted at RAAF Edinburgh in conjunction with 3 Security Forces Squadron (3SECFOR) which operated the UAS.

It proved the ability to operate a UAS via the C-130J’s onboard wide-band Satellite Communications (SATCOM) link and provide still and video imagery from the UAS, a key plank of the RAAF’s Plan Jericho which aims to provide extended secure networks to bolster the ADF’s capabilities by increasing situational awareness via datalink from remote sensors.

“This trial is the first time that airborne control UAS has been attempted from a C-130J Hercules,” RAAF SQNLDR Peter Cunningham said in a statement.

“We used our wide-band satellite communication systems to provide a link to the UAS controller on the C-130J beyond the line of sight, and received video from the UAS throughout the flight.

“Working together with different skill sets and stakeholders such as 3SECFOR, Army and Plan Jericho has shown how we can be responsive to meet the needs of Air Force in pretty short order.”

SATCOM along with other communications and intelligence, surveillance and reconnaissance (ISR) capabilities – including Litening AT EO/IR pods formerly fitted to RAAF F/A-18A/B Hornet fighters – is being rolled out to the RAAF’s C-130J fleet through the Plan Jericho initiative.

“With this sort of technology, we can see much further and be more distant from our targets, while still getting a comprehensive understanding of the ground in front of us through a streamlined information feed,” CORP Mitchell Blight said

“Be proactive, network with other units and you will find like-minded people who are willing to help,” UAS operator LAC Rhys Mitting added. “You need to be motivated, hardworking and you need to contact Jericho.”

The featured photo: 3SECFOR’s LAC Chaddyn Bray studies the feed from the R70 UAS from onboard the C-130J. (ADF)