To be called the ‘Hunter’ class in service, the nine vessels will be built by ASC Shipbuilding at the Osbourne Naval Yard in Adelaide starting in 2020. The first vessel will enter service in 2027 to start replacing the eight-ship ‘Anzac’ class, with the final vessel due to be delivered to the RAN in 2042. 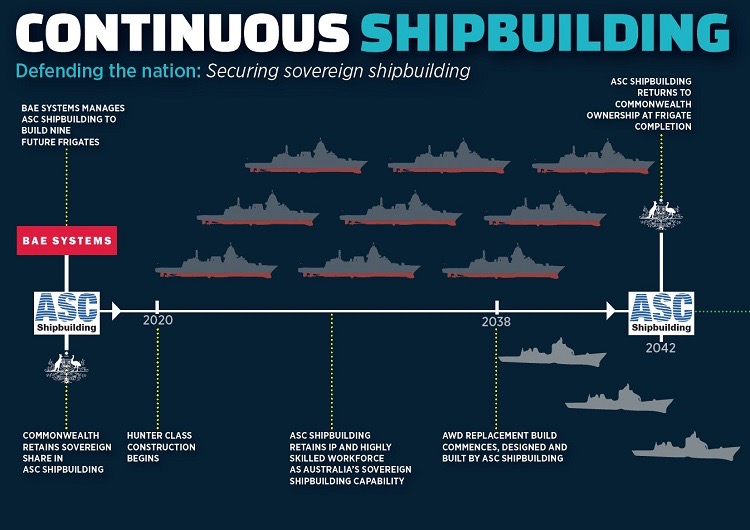 During the Hunter class build, the Commonwealth-owned ASC Shipbuilding will become a subsidiary of BAE Systems, making the company fully responsible and accountable for the vessels’ delivery.

“At the end of the program the Commonwealth will resume complete ownership of ASC Shipbuilding, thereby ensuring the retention in Australia of intellectual property, a highly skilled workforce and the associated equipment,” a joint Prime Ministerial and ministerial release reads. “By the conclusion of the frigate build, ASC Shipbuilding will be a strategic national asset capable of independently designing, developing and leading the construction of complex, large naval warships.”

Australian content on the vessels is expected to exceed 65 percent. To this end, BAE has pre-qualified more than 500 Australian companies located in every Australian state and territory as part of its proposed supply chain for the build program.

“The Future Frigates… will be built in Australia, by Australians, using Australian steel,” the release says. “This $35 billion program will create 4,000 Australian jobs right around the country and create unprecedented local and global opportunities for businesses large and small.”

In a separate release, BAE Systems Australia Gabby Costigan said, “Construction of the Global Combat Ship – Australia is expected to make a significant contribution to the nation’s economy, creating thousands of jobs, supporting new industries and boosting the national supply chain for decades to come. We are committed to creating a strong, sustainable and innovative naval shipbuilding industry that will see highly skilled Australians building and sustaining warships for the Royal Australian Navy.

“We are proud to have been selected as preferred tenderer to provide the Royal Australian Navy with a world-class ship, equipped with the latest technologies and designed specifically to meet its needs. The Global Combat Ship – Australia will help protect our shipping lanes and regional trade routes, serve humanitarian missions and provide the nation with a formidable naval capability.”

The Hunter class will specialise in anti-submarine warfare and will be equipped with an S2150 hull mounted sonar and an S2087 towed array. It will also incorporate a four-faced CEA Phased Array Radar that will be integrated with the Lockheed Martin Aegis combat management systems and a Saab 9LV interface.

The Type 26 is 150m long, displaces 8,800 tonnes full load, and has an approximate complement of 180. It can embark an MH-60R Romeo Seahawk helicopter in the hangar and an additional helicopter or an unmanned aerial system in the mission bay forward of the hangar.

The vessel will be armed with MU90 torpedos and a Mk45 Mod4 5in gun, and the Mk41 vertical launch system will be able to employ SM2 and ESSM surface-to-air missiles, new generation anti-ship missiles, and the BAE Nulka active decoy system.

The Type 26 beat out rival bids from Navantia with the F5000, and Fincantieri’s FREMM design. The UK Royal Navy is also buying the Type 26, the first two of which are currently under construction. The first RAN vessel is currently scheduled to be the fourth Type 26 built.

A graphic showing the government’s continuous shipbuilding plan, with the SEA4000 Hobart class DDG replacement program getting underway from 2038

Republished with permission of our partner Australian Defence Business Review.