The UAV is flown on a lightweight 100 metre line, allowing it to operate almost indefinitely as it gets its power source from the ground. Different payloads can be carried, including antennas and cameras. Sustained payload capacity is 2.5 kg, although more can be carried for shorter times. 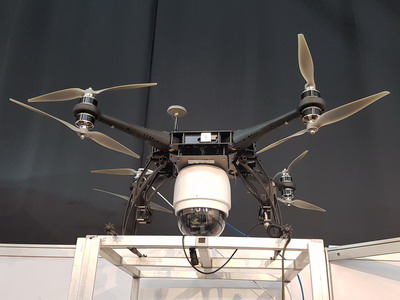 Dronetec also manufactures its own UAVs, including the locally designed and developed WASP, although it uses some DJI components.

The 6-rotor WASP has arms that have been designed as completely self-contained units which can be removed by the simple twist of a single cam. This design allows the drone to be quickly disassembled and transported in a considerably smaller case then would normally be required. Lifting capacity is 4.5 kg and flight time up to 30 minutes.

The platform can be used for numerous applications ranging from film quality cinematography to the mounting of a single pepper ball gun with 50 rounds used in riot control.

Dronetec is currently delivering UAVs to the South African Police Service’s Crime Intelligence division, which will use them to pursue suspects into residential areas, amongst other duties.
Dronetec has previously used its UAVs during trials by law enforcement in Cape Town.
In 2015 a WASP Mk 4 fitted with a thermal camera was used by the police in a drug bust on a house in the Cape Flats, providing a capability far cheaper than that of a helicopter. Trials were also carried out in Johannesburg.
This article was first published on June 14, 2019 by our partner defenceWeb.
Defense Decisions
01/19/2023
By Justin Katz