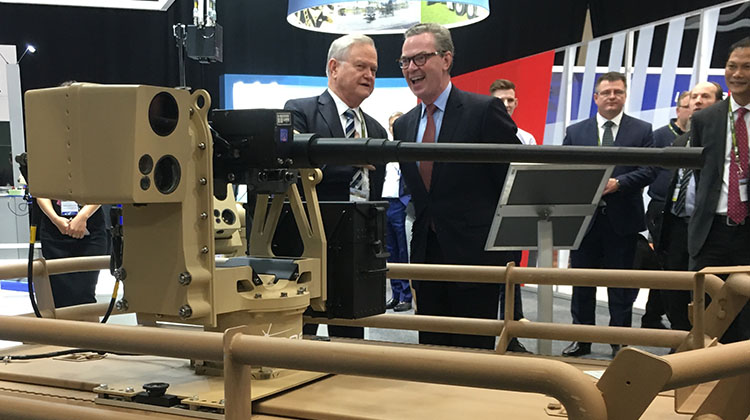 The company was also named as the supplier of remote weapon stations for the Army’s Boxer Combat Reconnaissance Vehicles (CRVs).

Minister for Defence Christopher Pyne made the announcement at Electro Optic Systems’ stand in the LAND FORCES 2018 conference in Adelaide on Tuesday.

The R150 is an upgrade of Electro Optic Systems’ existing R400. It was developed as part of a Commonwealth Priority Industry Capability Innovation Proposal and recently concluded its testing program that included being fitted onto the Army’s Bushmaster Protected Mobility Vehicle and Hawkei Light Protected Vehicle.

It is expected to enter production before the end of calendar 2018.

Electro Optic Systems group chief executive Ben Greene said the R150 was half the weight of any 12.7mm machine gun system in the world today with better accuracy.

Those characteristics would “change the whole mobility spectrum” for potential clients.

“I’m very pleased that we have a product that falls right into the DNA of our company, which is lethality and mobility,” Greene said.

“We move fast and we strike hard.”

The company said there was already a significant amount of international interest on the R150.

“It’s always a great pleasure when I get to do an opening or a launch of a company that doesn’t have Australia at the end of the title,” Mr Pyne said.

Pyne said the R150 showed the company was “still at the cutting edge of new technologies”.

Meanwhile, the Minister said Electro Optic Systems had won the right to supply the remote weapons system for the Army Boxer CRV.

“I’m absolutely delighted that a home-grown company like EOS will be able to add to the Australian industry content of the Boxer, of the combat reconnaissance vehicle project. That’s been a couple of years in the making,” Pyne said.

“Let’s hope we have many more of these good success stories to announce over the coming months and years.”

Greene was also full-throated in his praise of Mr Pyne’s previous work as Minister for Defence Industry.

“Minister Pyne is very well known to all of us as an outstanding Minister for Defence Industry,” Greene said.

“You really changed the outlook for Australian defence industry.”

This article was first published by our partner ADBR on September 5, 2018.