Just weeks ago, McCarthy went to Texas to see rival Bell’s V-280 Valor, which started flight test a year before Defiant, and afterwards the Secretary gave a public warning that he wasn’t going to slow down the Future Long-Range Assault Aircraft program, intended to replace the Reagan-era UH-60 Black Hawk, just to let competitors catch up to Bell.

“We’re flying it before we’re buying it,” McCarthy said this morning. “There’s nothing better than putting hours against the platform and learning.”

So the challenge for the Defiant team today is clear. Not only did they have to show McCarthy a good flight, they also – and more importantly – had to show him they’ve done enough testing on the ground and in simulations to prove their aircraft will perform as promised in the air.

“I have just a few facts that I’d like to make sure that you’re aware of,” Sikorsky president Dan Schultz said on the tarmac here this morning to the Secretary and Sen. Tammy Duckworth. “We have over 1,000 hours in integrated test in our labs, we have over 7,000 component individual development hours, and we have 2,000 hours of engineering in our wind tunnels and our engineering labs.”

“When Defiant flies, it’s the result of so many other hours of work to get there, we don’t get surprises in flight test,” he said. “We discover them on the ground.”

In fact, when Sikorsky and Boeing execs herded a dozen or so reporters around the Defiant’s hangar yesterday, they made sure to show everyone a huge poster of this graphic: 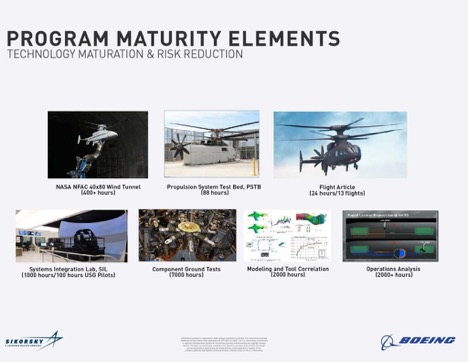 We may not have a lot of hours in the air, but we’ve exhaustively tested every component of this aircraft, and we’ve put a full-size version – the Propulsion System Test Bed, basically another almost-complete prototype, bolted to the ground – through almost a hundred hours of ground tests.

“This is my favorite piece of equipment,” Sikorsky test pilot Bill Fell said as he showed reporters the test bed. “We find our problems out here” – not in flight.

Now, the Defiant team’s statistics take some interpretation. First of all, the figure for the aircraft itself, labeled “flight article” —  “24 hours/13 flights” – is a little misleading, because it adds together the number of hours in flight test with the number in ground tests. If you break those two apart, the Defiant prototype has done 13 hours of testing on the ground and, in its 13 test flights, has only spent 11 hours in the air.

But that’s not counting the flight today, which, while intended to show off for the secretary, is still being used to gather test data. In fact, after months of delays – first building the aircraft’s uniquely long and ultra-rigid rotors so Defiant could take off at all, then almost immediately grounding it, after just an hour of flight time, to replace a problematic bearing – the SB>1 has started knocking back test flights at a brisk clip.

“We have flown at least once every week in 2020,” Sikorsky test pilot Bill Fell said as he showed reporters around the aircraft.

That pace, in turn, is only possible because the Propulsion System Test Bed and other ground tests are running so hard, Fell said, that they are wringing out the risk of something failing before the aircraft ever takes off. In fact, the ground tests stress the components much more than actual flight tests, providing a margin of safety. All this means Fell & his fellow pilots can ramp up the performance faster from one flight test to the next.

With ground testing, “we’ve already done the homework,” Fell said. “[So] we fly the aircraft, look at the data specific from that flight, [check] ‘does it match what we predicted?’ and then move on to the next piece of envelope expansion.”

In fact, the ground test is pushing so hard that the figure on the graphic for the Propulsion System Test Bed is already out of date: It’s now run for over 90 hours.

Sikorsky president Schultz took pains to give his Boeing partners credit for making all this high-tech testing possible. “Without Boeing we couldn’t have finished Defiant, [because] we didn’t have all the capability [needed],” he told reporters this morning. “They brought the whole benefit of the Phantom Works[Boeing’s elite and secretive military R&D arm]. They brought their developmental engineers to us, and we were able to go through all the aerodynamics inside the wind tunnel together.”

But what has the actual aircraft done in flight? Fell said that Defiant has flown backwards, sideways, banked at a 45-degree angle, and flown forward in level flight as fast as 150 mph (130 knots).

When will the Defiant fly at its top speed? “A few months,” Fell said. That’s a remarkably short timespan compared to how long it’s taken to get it this point.

How’s that possible? “The work that we’ve done and the investment we’ve made on the test stand is now paying its dividends, and flight test is accelerating,” Fell said. “It’s just a matter of how much do we get done before we’re obligated to write a report on all of that data”: The final report to the Army – on which Defiant’s already gotten an extension – is due in September.

Boeing’s lead test pilot on Defiant, Ed Henderscheid, offered a homely analogy for all the prep work done and the flight tests yet to come. “It’s like, if you’ve ever painted a house, you know you’ve got to scrub the walls, you’ve got to mask everything, and then you’ve got to sand and patch,” he said. “We’re in the fun part. We’re painting.”

“We’re way closer to the end than to the beginning,” he said.

This article was first published by Breaking Defense on February 20, 2020.