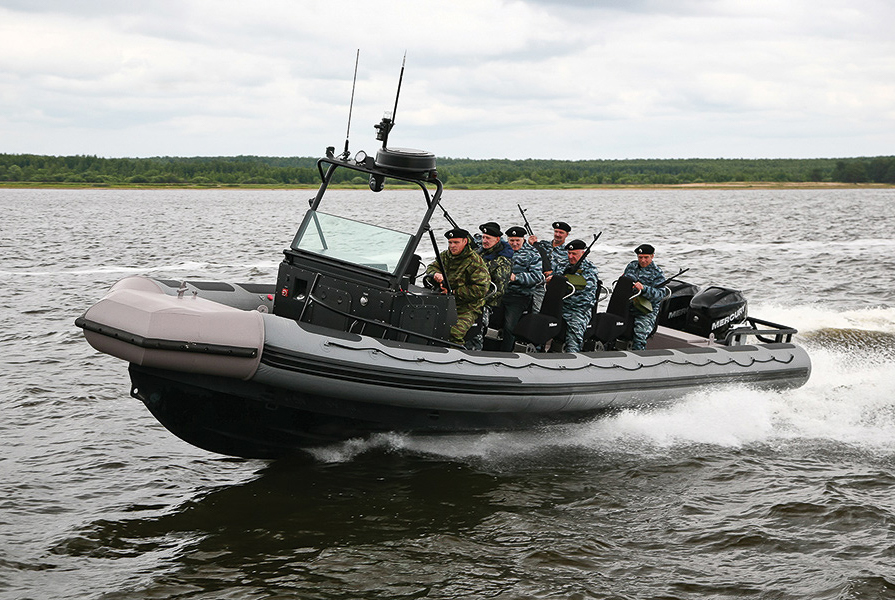 Russia’s Kalashnikov has sold a number of BK-10 assault boats to a sub-Saharan African country in the first such naval sale in 20 years, defence holding company Rosoboronexport has announced.

Rosoboronexport on 10 April said the contract was signed recently and is being implemented.

“This is an undoubted success in fostering military-technical cooperation with the countries of the region that is strategically important for Russia. We have been working long and purposefully to develop relations with them and expand our African footprint, which now covers almost the entire continent. The Russia-Africa Summit and Economic Forum, held in Sochi in October 2019, gave a strong impetus to the growth of our cooperation and its transition to a new quality level,” said Alexander Mikheev, Director General of Rosoboronexport.

Powered by two outboard engines developing 300-350 hp, the BK-10 can reach speeds of up to 40 knots and has a range of 400 miles. It can carry up to 10 people plus two crew and is equipped with a metal bow platform or ramp to facilitate landing on unprepared shores. Shock-absorbing saddle-shaped seats are designed for crew and passenger comfort.

The BK-10 has an armoured wheelhouse and a bullet-resistant windshield. Armoured plates can be installed around the troop compartment to protect passengers. The boat can be armed with up to four 7.62 or 12.7 mm machine guns.

“The BK-10 surpasses all its closest competitors on the world market in terms of range, troop capacity and firepower. In turn, the relative simplicity of the construction technology enables Rosoboronexport to offer its partners the boat both as a final product and for licensed construction at the customer’s national shipyards,” Mikheev added.

Rybinsk Shipyard offers several BK-10 variants, including the BK-10M with a larger 8 ton displacement, more powerful engines (370 hp each), and ability to carry 12 passengers. It can be fitted with a Kord 12.7 mm heavy machinegun, two 7.62 mm Kalashnikov PKM machineguns or a Balkan 40 mm automatic grenade launcher. The larger BK-10D displaces 9.3 tons and is powered by two 436 hp engines.

Rybinsk Shipyard also offers the BK-9 and BK-11 boats and BK-16 multi-purpose amphibious vessel. An unusual feature is they can launch unmanned aerial vehicles from their decks.

In 2017, the company reported interest in its boats from South Africa, Argentina and the Philippines, TASS reported at the time.

This article was published by defenceWeb on April 16, 2020.