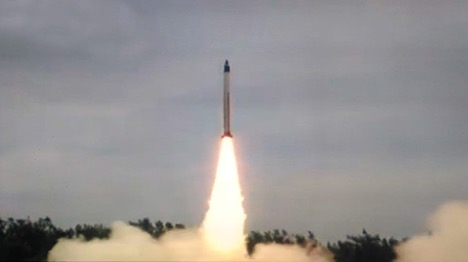 New Delhi. India successfully tested a Hypersonic Technology Demonstration Vehicle on September, becoming only the fourth nation in the world to possess the capability to do so.

“In a historic mission today, India successfully flight tested Hypersonic Technology Demonstrator Vehicle (HSTDV), a giant leap in indigenous defence technologies and significant milestone towards a #sashaktbharat and #atmanirbharbharat,” the Defence Research and Development Organisation (DRDO) said in a tweet.

“DRDO with this mission, has demonstrated capabilities for highly complex technology that will serve as the building block for NextGen Hypersonic vehicles in partnership with industry.

“Chairman DRDO congratulated all the Scientists, Researchers and other personnel related with #HSTDVmission for their resolute and unwavering efforts towards strengthening Nation’s defence capabilities,” the DRDO tweeted.

“I congratulate to DRDO on this landmark achievement towards realising PM’s vision of Atmanirbhar Bharat. I spoke to the scientists associated with the project and congratulated them on this great achievement. India is proud of them,” Defence Minister Rajnath Singh tweeted.

The test was conducted from the Dr. A.P.J. Abdul Kalam Launch Complex at Wheeler Island off the Odisha coast.

This article was published by India Strategic on September 7, 2020.