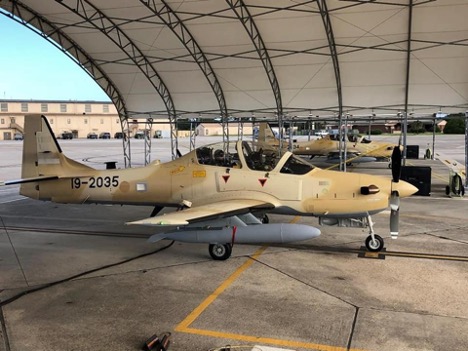 Six of 12 A-29 Super Tucano aircraft on order for the Nigerian Air Force have been manufactured and training is underway in the United States ahead of delivery next year.

This is according to the Nigerian Air Force (NAF) which on 30 November gave an update on the project. “The A-29 Super Tucano aircraft project is on track to be delivered on schedule and in accordance with the Terms of the Contract. Currently, six of the expected 12 aircraft have been produced and are presently being employed for conversion training of six NAF pilots who are in the USA, along with 26 NAF engineers, technicians and logisticians, who are also undergoing various training on the aircraft as part of the provisions of the Contract.

“Another set of 35 personnel are also scheduled to join them early next year. In addition, a team from the USA is currently in Kainji overseeing the construction of critical infrastructure provided in the Contract ahead of the delivery of the aircraft.”

The roughly 40-year old runway at Kainji used by the 407 Air Combat Training Group (ACTG) has been earmarked for resurfacing. “In this regard, the National Assembly, through the Senate and House Committees on Air Force, as well as the Federal Government are working assiduously to secure funding for the resurfacing. The United States Government, on its part, has also assured of its commitment to delivering the 12 aircraft within the agreed timelines, while the NAF will continue to work to emplace necessary infrastructure to ensure that the aircraft can be effectively utilized immediately they arrive the country,” the NAF said.

Nigerian Super Tucanos will be based at Kainji Air Base in the west of the country, with upgrade and renovation work scheduled to be carried out at the base ahead of delivery – work started in August and includes a new airfield hot cargo pad, perimeter and security fencing, munitions assembly and storage, small arms storage, a flight annex wing building for simulator training, airfield lighting, and various airfield apron, parking, hangar, and entry control point improvements.

This article was published by defenceWeb on December 2, 2020.