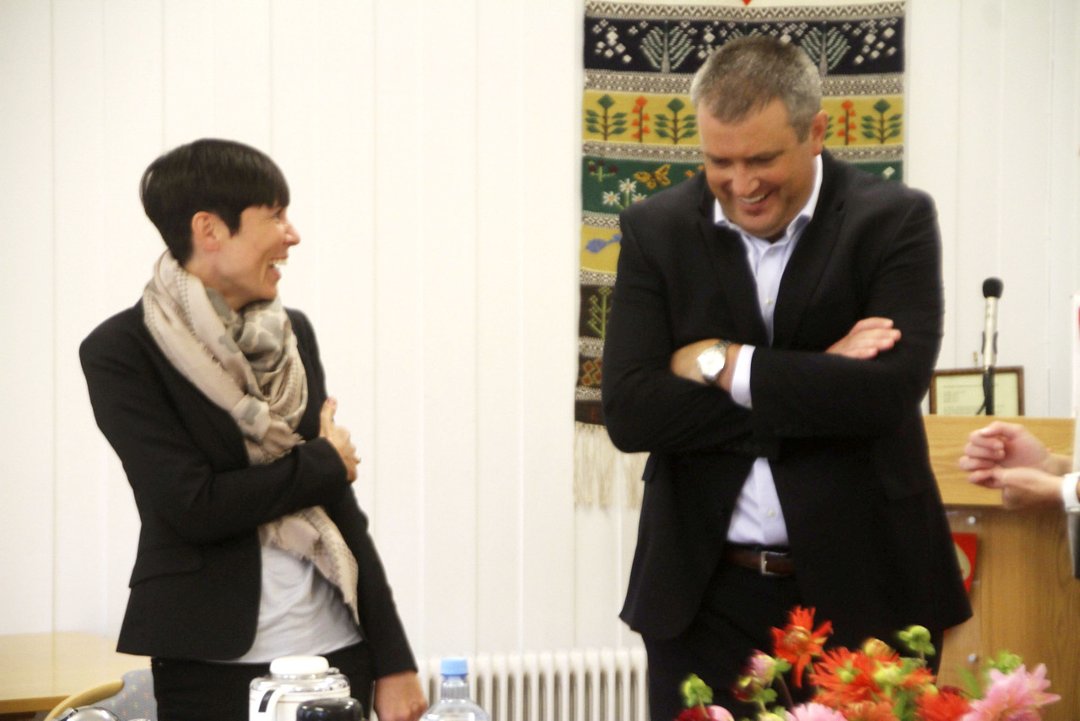 Last year, I visited Norway and had a chance to discuss with senior officials their thinking about the way ahead for Norway and North Atlantic defense.

The Norwegians are investing significantly in new systems, but just as importantly are re-focused on their total defense concept to ensure the capability to provide for defense in depth for Norway.

This means working effectively with allies in the region, but also to being able to integrate allied forces, which come to Norway to work in exercises as well, would come in times of crisis as well.

During my visit this April, I had a chance to visit air bases in the north of Norway as well as to continue my discussions with senior Norwegian officials.  One of those officials was Keith Eikenes, Director for Security Policy and Operations in the Norwegian Minister of Defence.

During our conversation last year, we focused on the changing strategic environment facing Norway and we picked up on our earlier discussion to relate that discussion to the preparation by Norway of its next defense white paper.

The Norwegians are half way through their current long term defense plan and are preparing the next one which will cover the period from 2020 through 2023.

Question: How would you characterize the current plan as well as the focus on the next one?

Keith Eikenes: The current long-term plan has a strong emphasis on regenerating combat power and on sustainability and readiness.

It is also about regenerating our ability to provide for and take part in collective defense in our region within the NATO framework.

But we did not really understand then, for obvious reasons, the true nature of what the new security situation was. We have a clearer view now and that will inform the next long-term plan.

A new normal that has been created now, and the fact that that it is a new normal is an important finding in itself, and we hope that we will return to better relations and more stability, but we must prepare for the fact that we will be in a situation that will be unstable and characterized by high tension for a significant period.

Question: It is clear from my discussions among the Nordic powers, that there is a clear focus on the need to have more effective crisis management capabilities to deal with the dynamics in the region.

How do you view this aspect?

Keith Eikenes: It is clearly a crucial one. One of the key tenets of this new security situation, the new normal, is the speed of what will be happening.

And we will need capabilities to understand and respond in a timely manner as well.

This will require civilian policymakers and decision makers to address how to be effective in the new situation as well.

Question: This poses a significant integration challenge for Norway in facing crises as well.

How do you view this challenge?

Keith Eikenes: Working with allies is crucial for Norway and working the integration piece is a key part of the effort. We have to be able to plug into something larger than ourselves for effective deterrence.

Having a security architecture for the region, with all of the key components – military and civilian — working seamlessly together, is an extremely important policy objective for Norway.

We are bordering the largest concentration of non-Western military power in the world in terms of the Kola Peninsula.

For deterrence to be effective, we need to have regular allied presence in our area as the new normal as well.

And part of the reason why we are strengthening our dialogue and increasing their incorporation with our Nordic partners, Sweden and Finland, is because we cannot view the challenges of the Baltic states as being isolated from the challenges in the High North or the North Atlantic.

That’s why we need to have a very close dialogue with our Nordic and Baltic partners on what’s going on in the Baltic Sea as well.

Question: In light of the evolving perspective in Norway, what are some of the key questions you are addressing as you prepare the next long-term plan?

Keith Eikenes: The key one clearly is what is the nature of deterrence in facing the new normal?

What type of assets, forces, structures, and cooperation with allies do we need in order to have effective deterrence in the future?

We must never lose sight of the fact that what we are trying to do is actually avoid a conflict. Getting the deterrence piece will be extremely important to shaping a way ahead.

For earlier discussions with Keith Eikenes, see the following:

The featured photo shows Keith Eikenes with the former Norwegian Defence Minister who is now the Foreign Minister and is credited to the Norwegian newspaper Jarlsberg Avis.