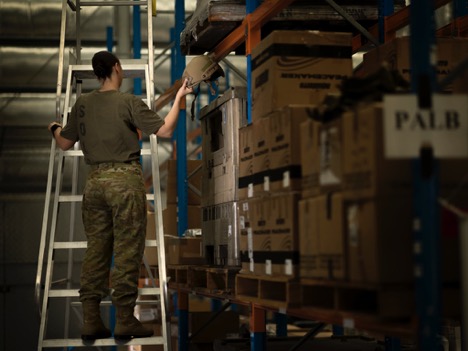 Discussions about self-reliance, like many other conversations among defence planners, rarely begins with a conversation on supply and support.

Most will end with it.

The ability of a military to conduct operations independently of another’s aid is intrinsically linked to the capacity to move, supply and support that force.

It would be a mistake to think that the Australian Defence Force (ADF) can go into a future war, especially one that tests the upper limits of its capabilities if not a national crisis, without the support of others.

At a simplistic level, many of our weapons, ammunition and components are acquired from other nations, or as we see with major capital programs, produced with others.

We complement our forces – in all domains – with discrete logistics capabilities provided by others.

Even in those times where the mantle of coalition leadership has fallen upon the ADF’s shoulders, as we saw with regional peacemaking and keeping operations of the last twenty years, the ADF has been supported from other quarters.

What is important for us to understand, now, is what the limits to self-reliance are.

Much of the conversation about logistics and its impact on national aspirations to self-reliance is coached in monumental terms and issues. National fuel supplies, prioritised sovereign defence industries and national manufacturing capacity, economic resilience in an era of globalisation; these contemporary, popularised, topics give us pause to consider major national security concerns in a time of increasing strategic competition.

They have been topics of interest to Australian governments and strategists for decades, beyond the period in which self-reliance was ensconced in the strategic doctrine of the 1970s, ’80s and ’90s, and to the interwar period where lessons from the First World War reminded them to be prepared for national mobilisation.

As important as our relationships with like-minded nations might be, there has always been a niggling doubt in the back of our minds compelling us to prepare for logistics independence.

As the Second World War proved, even in a coalition conflict there will be times the ADF will need to ‘go it alone’ and sustain itself as our allies resources are drawn elsewhere.

The ADF, its partners in academia, industry and government, are at a point where the discussion has to get to the specifics of the problem.

Moreover, this discussion must tread into the deep, dark, recesses of Defence modernisation with questions asked as to how long our impressive new capabilities, from the RAAF’s F-35 to the Army’s Combat Reconnaissance Vehicle, can endure on the battlefield of the future when our friends are far away.

This article will briefly touch upon some areas which the professionally interested will have to tread.

Logistics has long been regarded as a crucial component of military capability, and the supply and support given to armed forces a major constituent of operational success.

Logistics constraints and strengths can shape strategy, determine the form and means of operations, and if given nothing more than a passing glance by military commanders and civilian planners, will prevent combat forces from ever achieving their full potential in the air, and on the sea and land.

As we seek to answer the question, ‘what can we achieve on our own?’, a really difficult question to answer, solutions to our logistics problems and concerns must be front and centre.

A suborned view of logistics in this discussion about self-reliance is way out of step with the strategic reality facing the ADF.

In engaging with this reality, we might see that logistics is, in fact, a strategic capability in its own right.

What are the big logistics challenges to confirming our limits and freedoms of action in terms of self-reliance then?

I have already mentioned some of the primary national security and strategic concerns above; critical issues for Australia to resolve in the coming years. Without necessarily delving too deep into national security infrastructure, what is arguably more important are the political and policy levers which set in motion the national endeavours that ultimately manifest in military logistics.

Only time will tell whether this will be enough in a time of significant crisis.

If the strategic competition continues, it may be a time to seriously question what full or partial industrial mobilisation might entail for the nation – or more importantly how to actually do it.

Many years ago the Minister for Defence held a ‘War Book’ which set the ground rules for the process of mobilisation at the highest national levels; perhaps a new one is needed if we are serious about the prospects for high-intensity conflict in the future.

At the military strategic level, the ADF’s self-reliance will be measured in the time it can sustain operations without replenishment from other quarters.

If it lacks the warstocks or support capabilities to sustain its materiel, the capacity of the global supply chain to support the operational requirements will be crucial. There are some commodities essential for our way of war that we cannot produce nationally such as precision weapons and ammunition.

The problem for Defence is that it is very difficult to determine how self-reliant the ADF might be while global supply-chains are opaque and Australia lacks the levers to intervene in global markets directly.

It may be that in a time of crisis traditional boundaries such as intellectual property rights will need to be challenged, industry capacity seconded to defence interests, and projects redirected in new directions at very short notice.

At the very least ADF and industry should discuss how industry ‘scales’ in parallel with any expansion of the fielded force.

It is impossible to talk about coordinating this activity without commenting on the nature of strategic logistics control in the Defence Organisation. Because the problems are large, the ways in which concerns on self-reliance will be addressed will invariably be pan-organisational in nature.

Commander Joint Logistics Command might be the CDF’s ‘strategic J4’ or key logistics commander, but he or she partners with the Capability, Acquisition and Sustainment Group, Estate and Infrastructure Group, the Services and others within what’s called the ‘Defence Logistics Enterprise’.

Each organisation naturally has a different perspective as to what ‘self-reliance’ means, and there is always a risk that Defence will have difficulty identifying where its logistics risks and opportunities truly lie in this context. Quite clearly the analysis of what the ADF’s ‘logistics limits’ are requires a coherent effort with solutions achieved through mutually supporting activities conducted across the organisation.

This may mean we reinvigorate the idea of ‘national support’ as a collective process in which industry and the military can work together to support operations; where national industry support to military operations is included at a conceptual level.

The most significant operational-level challenge to self-reliance, I argue, is with respect to strategic mobility.

The ADF regularly seeks operational-level support in terms of intelligence and a wide range of capabilities that a military of our size simply could not realistically produce. Perhaps there will be a time in which very long-distance fires will overcome the geography between an adversary and us, but until they do to a level that satisfies the desired military outcome strategic mobility capabilities will continue to be critical to the ADF.

Until then, our strategic mobility will be critical to achieving a persistent response (whether that be on land or at sea) to an offshore threat.

Most of our partners declare their own paucity in strategic mobility capacity which suggests that even if our future conflicts are shared, we might still need to invest heavily in order to meet our own requirements.

On top of the mobility capabilities themselves, the aircraft and the ships and the contracted support we can muster from the nation, we cannot forget the ‘small’ enablers that support a deployed force.

In our recent campaigns in the Middle-east, we have been heavily dependent upon our coalition partners for the subsistence of our forces. There is a real risk that our operational habits may have created an environment which gives false expectations of the logistics risk resident within the ADF, especially when it comes to conducting operations without coalition support.

As the Services look to their future force structure, it will serve them well to scrutinise not only those capabilities essential for basic standards of living, but the widespread of logistics capabilities are essential complements to their major platforms.

These include over-the-shore logistics capabilities for amphibious operations, expeditionary base capabilities as well those elements of the force that receive, integrate and onforward soldiers, sailors and airmen and women into the operational area.

With the newly formed Joint Capabilities Group, the ADF has a significant opportunity to address these operational challenges to self-reliance comprehensively.

You do not have to deeply analyse Defence logistics to understand that self-reliance is underpinned by the ADF’s – if not the nations – capacity to sustain and support its operations.

The comments here are certainly not revelatory, nor are the allusions to the limits of ADF’s capability particularly surprising.

For the ADF to be effective in a high-intensity conflict, there is still a way to go yet, irrespective of whether it goes to way within a coalition or not.

There is every chance that even if the ADF does deploy as part of a coalition, it will still be necessary for it to have a capacity to support itself.

It is understandably important that we have a conversation about the limits to self-reliance in the current time of peace and think deeply about establishing the policy infrastructure and organisational arrangements that will enable us to make good judgements on what the ADF can or cannot do alone.

Without doing so, we risk logistics capability being revealed as a constraint on ADF operations, not a source of opportunity and the well from which the joint force draws its strength to fight.

David Beaumont writes regularly at www.logisticsinwar.com (T: @davidblogistics). The views here are his own.

This article was first published by Central Blue on March 31, 2019.

On 11 April 2019, the Sir Richard Williams Foundation is holding a seminar examining high-intensity operations and sustaining self-reliance. The aim of the seminar, is to establish a common understanding of the importance and challenges of sustaining a self-reliant Australian Defence Force in a challenging environment.

The Strategic Shift and Enhanced Force and Combat Sustainability