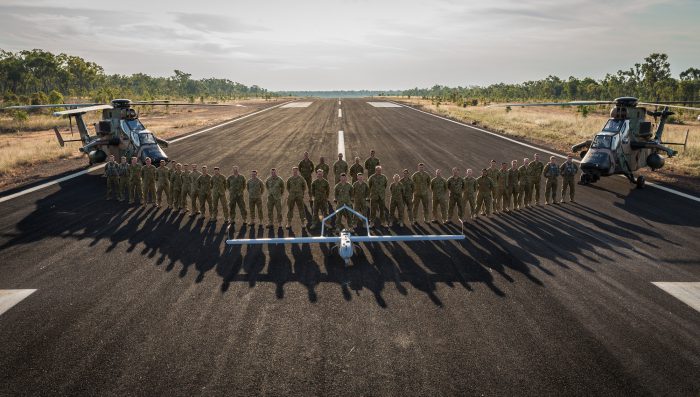 The 2016 defence white paper and the decades-long integrated investment program will deliver a future force that includes 72 joint strike fighters, several hundred infantry fighting vehicles, nine new frigates and 12 new submarines. F-35 deliveries have started but the ‘future’ frigate and submarine programs were well named: the Hunter-class frigates will turn up, all going well, between 2028 and the early 2040s, and the first Attack-class submarine is scheduled to enter service in 2035, with the 12th in the mid-2050s.

Meanwhile, technology is advancing quickly. There’s been lots of anxiety and hype about lethal autonomous weapon systems—the feared killer robots. But there’s also been a huge amount of experimentation and investment in autonomous and semi-autonomous systems, land, air, sea and undersea.

The US, for example, has demonstrated self-navigating surface and undersurface vesselsand numerous land and air systems. The US Navy’s Project Overlord is aiming to deliver 10 large unmanned surface ships by the mid-2020s—before our first frigate enters service. China and Russia are developing similar systems.

The Australian Army is experimenting with unmanned aerial vehicles (UAVs) and the RAN with various unmanned systems. Boeing’s ‘Loyal Wingman’ concept UAV is being developed for the RAAF, with a refreshingly rapid timeline that aims for a first flight in 2020. But I don’t see a shift in where Defence’s investment dollars are going that indicates this is more than a hobby for now. That needs to change fast.

Such systems will, at the very least, be essential ‘complementary capabilities’ to the big, complex manned platforms lumbering into the ADF’s inventory over the next 35 years. They may make some of these platforms obsolete, or turn them from frontline combat systems into motherships, providing power and logistics support.

The design concepts of our ‘future force’ need to be worked on now with this in mind.

The other big area in which technological developments and our defence capabilities look badly out of step is in applying ‘narrow artificial intelligence’ to how defence systems are used and to how decisions—tactical, operational and strategic—are made. Supermarkets use this type of AI to optimise inventories to meet customer needs. It displaces humans in factories and call centres and helps us with our internet searches. So, narrow AI is not the potentially species-threatening superintelligence or ‘artificial general intelligence’ Elon Musk has warned about. Think more along the lines of high-speed trading algorithms or Google’s AlphaGo than Will Smith’s enemy in I, Robot.

Technological change is redefining warfare by the attributes of speed, autonomy and precision. Dispersal and rapid reconstitution of combat losses will be required for the future ADF to thrive in such an environment. Speed will be essential not just for weapon systems (for example, hypersonics) but also for command, control and decision-making.

But speed and hierarchies don’t coexist easily or naturally. Hierarchies, by their nature, involve delayed decision-making and sequential decision-making at multiple levels—and they’re the enemies of speed of response. So the organisational structures and processes in ships, squadrons, platoons, brigades and joint taskforce headquarters, across the Defence organisation, in every part of Russell Offices, and right across the lake into the cabinet room will need to change to be fit for future conflict. It will be a wrenching and threatening package of reform and change, as disruptive to current military hierarchy and structures as Amazon has been to the retail industry.

For AI to take back the time advantage from adversaries using high-speed precision weapons, it will need to find its way into the ADF’s existing systems and platforms soon—well before the first new frigate or submarine gets wet.

Warfare through history is a story of measure and countermeasure. While the combat systems that are on our Anzac-class frigates and air warfare destroyers can track and defeat numerous simultaneous missile threats, the speed of decision-making on board the ships depends on multiple human intervention points. Myriad pieces of information from shipboard and offboard sensors, intelligence and data need to be fused into a coherent picture for the crew and captain.

No matter how skilled the console operators, principal warfare officers or commander, and no matter how highly developed the combat systems are, the time-and-motion problem posed by numerous supersonic and hypersonic threats will be intense.

AI will be essential for supporting high-speed data analysis and decision-making. Training AI decision-support algorithms on the mass of data that a ship’s combat system and command chain will have available won’t just allow the vessel to use its onboard defence systems to defeat attacks; it will also facilitate rapid cueing of offboard systems—say, on a nearby F-35, Growler electronic attack aircraft, P-8 patrol aircraft, accompanying surface vessels or even unmanned systems—to defend the ship and attack the adversary’s weapons, launch sites, targeting systems, and command-and-control chain. And it will allow the AI-enabled decision system to draw on masses of historical data and intelligence relevant to the environment and threats being faced.

In the world of high-speed, autonomous and precision weapon systems, AI can return the advantage to the defender by enabling its systems to make faster and better informed decisions than the attacker’s systems. It can support an asymmetric response that will give the defender more options than simply shooting faster than the attacker.

Concepts for employing this aid to high-speed decision-making in existing ADF platforms and systems are urgently needed. To put these concepts into action, equally urgent design, development and investment is required to retrofit systems like the Anzacs and AWDs, and also the command-and-control systems already operating across the ADF. The Anzacs, the Collins submarines and the AWDs will be frontline combatants for decades, so it’s essential to equip them to survive and be effective over that timeframe. AI-enabled onboard decision-support systems must be a part of the plan.

A defining opportunity is the planned $2.5 billion investment in AIR 6500 to acquire a command-and-control system for integrated air and missile defence that will operate from the level of protecting deployed army units right up to protecting whole joint taskforces, combining army, air force and navy units and systems. This system must have AI built in from the concept stage.

That will be key to taking advantage of the masses of data collected and required by ADF units, along with historical data that enables AI systems to learn and to apply that knowledge to new environments.

It’s absolutely feasible to retrofit autonomy and AI algorithms into military platforms and control systems. The US Air Force is converting more F-16 fighters to autonomous aircraft, while DARPA is bringing AI-enabled tools into existing aircraft so that each can control multiple drones. Lockheed Martin’s Sikorsky now has years of experience in developing ‘software and hardware that bring autonomous flight to the cockpit’ of its Black Hawk helicopters.

It’s great to muse about the wonders of Australia’s $200 billion ‘future force’, but our time would be much better spent on the urgent new work and thinking required to make our existing force effective in the environment it will face in the early and mid-2020s.

That means loving the force you have—acting now to develop the concepts for use of AI across the ADF, and investing to retrofit the systems and platforms that will remain in service for decades.

That will prepare us for those bright sunlit days when the Hunter and Attack classes become real.

Michael Shoebridge is director of the defence and strategy program at ASPI. Image courtesy of the Department of Defence.