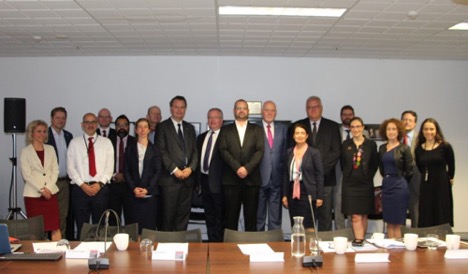 In a recent public lecture, former Australian foreign minister and outgoing chancellor of the Australian National University Gareth Evans commented, ‘Geopolitically, Europe’s role matters enormously, again, in a world where principled voices are in short supply … and where multilateral approaches to problem solving—particularly on those … issues … which Kofi Annan used to describe as “problems without passports”—have never been more necessary’.

While Evans cited climate change as the quintessential example, ‘problems without passports’ encompass all sorts of crises and challenges that transcend borders. The asymmetrical security threat posed by transnational terrorism is another case in point.

Despite sustained multilateral efforts over the past 18 years, the threat from terrorist groups seems to be constantly evolving rather than abating. Initial hope that the destruction of Islamic State’s ‘caliphate’ in Iraq and Syria would also signal the demise of the movement was misplaced. IS has shown itself to be resilient and adaptable as it seeks to shift its frontiers to other geographic locations in Asia and Africa. The influence of IS—especially through former fighters and sympathisers making their way to Europe or Southeast Asia—remains an ongoing challenge for security and law-enforcement agencies in Europe and the Asia–Pacific region.

In this complex, interconnected global and regional security environment, Europe and Australia are both confronted by security issues that require strategic and coordinated long-term efforts to match their fluid nature.

As Peter Jennings remarked in this context, ‘Australia and Europe also face shared threats that are not limited by geography and are increasingly high priority. Cooperation on counter terrorism and cyber security draws key intelligence and security agencies closer together … In many respects our alignment is natural given our shared values and similar strategic perspectives.’

As like-minded partners with a common rules- and values-based foundation that sets the parameters for political action, Australia and Europe are well positioned to exchange ideas, information and best practice. Their security partnership began with the end of the Cold War, but following the 11 September 2001 terror attacks in the US, Australia and the EU formally increased their cooperation and began to advance dialogue on foreign policy and security matters. The 2017 framework agreement between the EU and Australia, described by the EU ambassador to Australia as a ‘strategic upgrade’, aims to strengthen relations by ‘identifying concrete ways’ for closer, more effective cooperation.

One example of increased Australia–EU cooperation and knowledge exchange on security matters is the annual 1.5 track dialogue between ASPI and the Regional Program for Australia and the Pacific of the Konrad-Adenauer-Stiftung (KAS), a German political foundation and think tank with a global network. ASPI and KAS recognised in 2015 that Australia and Europe share similar challenges in countering terrorism and violent extremism—yet there was no (sub-official) forum for those involved in combatting these threats to share views, gain new understandings and explore avenues for strengthening cooperation.

The result has been a series of thought-provoking seminars alternating each year between Australia and Berlin or Brussels. The 2018 dialogue focused on how the fall of the IS caliphate in the Middle East has affected terrorism dynamics. Participants sought to identify the extent to which Australia and European states had adjusted their systems and outlooks to respond to the challenges posed by jihadism in the post-caliphate period. While discussions were held under Chatham House rules to allow for an open, confidential exchange, the main topics and findings are presented in a new special report for ASPI, compiled by Isaac Kfir and me.

Titled Shifting frontiers: addressing post-caliphate terrorism dynamics, the report covers the dialogue’s key themes, which reflect current issues in terrorism research, and links them to wider policy-relevant debates. In order to illustrate the breadth of perspectives, the publication features contributions by participants from Australia and Germany—notably Australia’s minister for defence, Linda Reynolds, who was then assistant minister for home affairs; the German parliamentary state secretary, Günter Krings; and Daniel Heinke, chief of detectives and director at the State Bureau of Investigations, Bremen Police.

These shared perspectives are testament to the strength of counterterrorism approaches grounded in joint values and principles, such as respect for the rule of law, human rights and fundamental freedoms. It’s not just pretty rhetoric to stress that Australia and Europe need reliable partners like each other that are responsive to the challenges at hand: in the face of transnational threats and quickly shifting threat vectors, it’s vital for upholding the rules-based order. This is especially acute when we’re dealing with the embodiment of ‘problems without passports’—the question of repatriating former IS members and their families.

Yet, a recurring emphasis on like-mindedness through common interests and values shouldn’t obscure a realistic look at where interests and values diverge. As has been observed in the context of the Australia–US strategic alliance, sometimes the happy lens of commonality—as important as it is—comes at the expense of understanding the finer nuances of a relationship and its cultural differences. Comparing and contrasting approaches with an open and analytical mind avoids blurred assessments.

As I note in the introduction to the report, identifying ‘knowledge gaps that have practical implications for countering terrorism’ is crucial. Often, failures of the imagination lead to an underestimation of the multilayered nature of terrorist phenomena. A nuanced, context-specific approach is key to avoiding over generalisations and policy responses that don’t correspond to reality—which is frequently more granular and complex than commonly assumed.

Katja Theodorakis is the program manager for foreign and security policy and counterterrorism at Konrad-Adenauer-Stiftung’s Regional Programme Australia and the Pacific.

This article was published by ASPI on October 8, 2019.