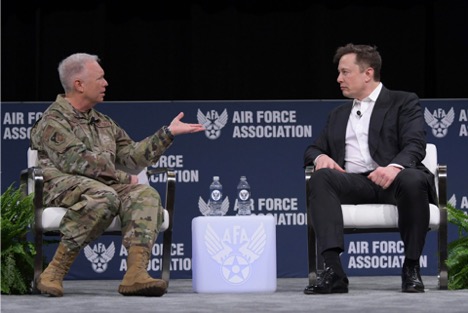 Elon Musk is a proven innovator and entrepreneur. He knows how to grab a headline, too.

Recently, he proclaimed the death of manned fighter aircraft in front of the world’s largest user of those aircraft—the U.S. Air Force. The defense media widely reported the comments, with one outlet calling them “frank and fascinating.”

That it was, but Musk is no warfighter and he is not responsible for the nation’s security.

His proclamations, while perhaps “fascinating,” are actually fallacious for a time when modernized manned fighter aircraft are needed to deter and if necessary, fight and win. For the next several decades, air superiority depends on fielding fifth- and next-generation aircraft, namely the F-35 and the next-generation air dominance (NGAD) system.

There is no chance some auto-park technology can replace them.

Musk stated, “Drone warfare is where the future will be. It’s not that I want the future to be—it’s just, this is what the future will be… The fighter jet era has passed. Yeah, the fighter jet era has passed. It’s drones.” Following up on Twitter after his talk, he put the F-35 stealth fighter in his target sight. “The competitor should be a drone fighter plane that’s remote-controlled by a human, but with its maneuvers augmented by autonomy. The F-35 would have no chance against it,” he tweeted.

Well Mr. Musk, actually, a manned fighter will hold the competitive edge for decades into the future.

The sensor ability to provide the 360-degree spherical situational awareness necessary to win in aerial combat connected to the kind of processing power resident in the human brain cannot be replicated in any drone today—or in the near-term. It might be possible sometime in the future for one-on-one, within visual range close-in air-to-air combat, but not today, and certainly not anytime soon, across the range of challenging scenarios that define air combat. That spectrum demands much more that simply pulling “G’s.”

Today, we cannot even provide robust, reliable, assured connectivity among weapon systems across all domains, and that is fundamental to coordinating effective combat—whether a person is in the cockpit or not.

To provide some point of reference relative to the current state of artificial intelligence in a far simpler scenario let’s look at Musk’s self-driving cars being tested today in a two-dimensional environment—not three dimensions as in air or space—with known rules of the road, simple mechanics, and well understood human behavior patterns.

In April 2019, Musk declared that Teslas would achieve “full self-driving” capability by the end of the year. It did not happen.

In December 2019 alone, three cars using the Tesla “autopilot” feature crashed. One ran a red light and collided with another vehicle, killing two people. On the same day, another hit a parked firetruck killing the Tesla passenger. The third Tesla struck a police vehicle on a highway. The point is that before we bet our nation’s security on a vision for an automated future that is yet to mature, we need capability and capacity that is proven, reliable, and available now to meet the demands of the national defense strategy.

In actuality, the Air Force has been working on the kind of high-performance autonomous fighter and associated technologies advocated by Musk for some time.

While some of us believe that we should be much farther down the path laid out in that plan than we are today, several challenges have slowed down the journey—money, culture, immature technology, policy, and ethics.

The use of artificial intelligence and elements of autonomy for lethal action pose particularly significant policy and ethics challenges.

The Skyborg program is a prudent step in the direction we need to go. It is an autonomous uninhabited aircraft that relies on artificial intelligence with the purpose of supplementing advanced manned aircraft—a “loyal wingman.” This kind of human-machine teaming is a pragmatic, actionable, and necessary move to meet the real demands of today’s national defense strategy while bridging to a future containing more autonomous and artificial intelligence-based systems.

Before we get to the unmanned future described by visionaries, a pressing need exists to recapitalize our geriatric Air Force, which consists of bombers, tankers, and trainers with an average age over 50 years, and fighters with an average age approaching 30 years—for comparison purposes the average age of the U.S. airline fleet is about 10 years, and they don’t pull 6 to 9 “Gs,” or the force of gravity, on a daily basis as do our fighters. Age, to a degree, reflects capability, and in that regard the U.S. military is atrophying. As DIA director Lt. Gen. Robert Ashley explains: “…the PLA [People’s Liberation Army] is on the verge of fielding some of the most modern weapons systems in the world. In some areas, it already leads the world.”

It is not just capability that is important, as capacity is equally critical to a successful defense strategy. Air Force leadership for many years has also emphasized that “The Air Force is too small for what the nation expects of us.”

The baseline reality is that the Air Force is operating the smallest and oldest aircraft force it has ever fielded in its history.

Congress asked the Air Force what was necessary to meet the demands of the national defense strategy. After much study it reported back to Congress in 2018 that across all the mission areas that it has assigned, the Air Force requires 386 squadrons up from the 312 that presently exist, to accomplish the missions stemming from the national defense strategy with moderate risk.

Here is what the AF Air Superiority Flight Plan says about the path we’re on: “The Air Force’s projected force structure in 2030 is not capable of fighting and winning against the array of potential adversary capabilities.” Folks, these are not politicians saying that, but rather an official statement from the United States Air Force.

Foresight is how the Air Force got to where it is today. Vision is absolutely necessary to maintain preeminence in future aerospace operations. A realistic evaluation of the near-term threats that might impede—if not preclude altogether—ever getting to that future is absolutely necessary as well. While futuristic predictions are interesting, they do not address the dangers on the doorstep.

Pragmatically, the optimal way to address the capability and capacity challenges that the Air Force and U.S. military face today is to accelerate F-35 production as fast as possible, and when the B-21 stealth bomber development is completed, to speed up its production as well. Mr. Musk, keep dreaming. We need that.

Make your cars and rockets better and more affordable, but do not forget that you will need a secure pathway to get there.

Republished with permission of the author.

This article first appeared in Forbes on March 2, 2020.