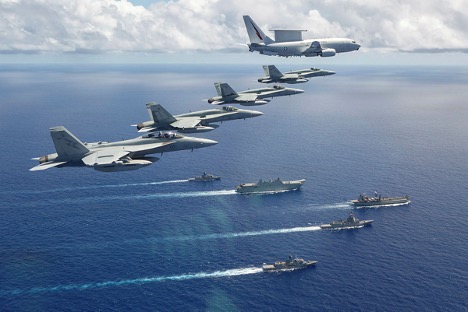 While the Royal Australian Air Force must be prepared to fight in a high-level, state-on-state conflict, it must also be able to operate in an increasingly contested Indo-Pacific ‘grey zone’ where competing powers use influence and coercion.

RAAF chief Mel Hupfeld says in an interview with The Strategist that since strategic goals are being won and lost in ways that avoid force-on-force conflict, the air force cannot afford to ignore these tactics just because they fall short of all-out warfare. ‘Choosing not to engage simply accelerates an adversary’s chances of success’, Air Marshal Hupfeld says.

Australia’s 2020 defence strategic update found that the regional security environment had deteriorated far more rapidly and in ways that could not have been predicted four years ago when the last defence white paper was produced. The assumption that Australia would have a decade’s warning of a looming conflict was no longer valid, it said.

As the service chiefs put the measures outlined in the update and the accompanying force structure plan into effect, new weapons for the air force will include long-range anti-ship missiles.

To help guide the RAAF in its evolving role, Hupfeld has issued a strategy setting out how the air force must adapt to carry out operations in the grey zone as part of an integrated approach across the Australian Defence Force.

He says a simplistic model of ‘peace’ and ‘war’ no longer adequately describes the geostrategic environment and, in an environment of strategic competition, malign actors exploit the grey zone to avoid clear escalation points that legitimise a traditional military response.

While high-end warfighting remains a core function of air power, growing strategic competition means the RAAF must be ready to operate with the rest of the ADF to provide the maximum strategic effect across a spectrum ranging from cooperation to conflict.

Hupfeld says that historically the RAAF has focused on high-end, state-on-state warfare, but a disproportionate focus on that level of conflict may cause the force to miss critical opportunities to contribute strategically through air and space power.

‘It is therefore necessary to broaden air force’s strategic aperture to encompass much greater utility than merely contributing to high-end warfighting.’

Many emerging international security challenges will not be suited to force-on-force engagement, he says. Rather, they will require the RAAF to provide an enduring contribution to statecraft.

‘To do this, air force must provide a suite of capabilities and effects that present strategic off-ramps and opportunities for the joint force at the lower ends of the spectrum of conflict, cognisant of the subtleties of the current strategic environment.

‘In short, air force must be part of Australia’s ability to synchronise and mobilise all aspects of national power.’

This whole process will require creativity on the part of personnel, and the strategy identifies an underlying tension between the clear and rational guidance and measurable boundaries required by those on air and space operations and the less prescriptive guidance for those working in other areas of the grey zone.

Hupfeld says the air force will empower leaders at all levels to make decisions and to succeed by removing unnecessary administration and bureaucracy and providing the framework to curate and grow ideas that bring an intellectual edge over potential competitors.

‘Platforms obviously are important, but the people that operate them are the real soul of the air force and indeed, the joint force. Our greatest asset is our people. We will continue to develop a skilled and intelligent workforce, a generation of air and space power leaders, and people who understand air and space power and deliver that for the joint force. It’s not just about delivering it for air force.

‘We recognise that we are very strongly technology based, but without the people who know how and when to use this technology, who have strategic awareness and knowledge about the impacts of their actions at all times, this will come to nothing.’

The air force strategy sets the shape of Hupfeld’s intent as commander but it doesn’t tell personnel everything about how they’re going to enact it.

‘What I require them to do is to think about how we shape the air force to get it where we want it to be. A lot of the “how” will come from the people. I want them to be comfortable with being uncomfortable.’

A key goal, Hupfeld says, is for the RAAF to be organised in a manner that optimises effect while reducing administrative burden and unnecessary bureaucracy. ‘Air force provides the opportunity and space for members to curate leading-edge research, honing ideas through to realisation in a safe environment that is failure tolerant’, he says.

The strategy explains Australia’s ‘shape’, ‘deter’ and ‘respond’ defence objectives as areas that support the nation’s interests by maintaining and building national cooperation and military partnerships to engage with key regional decision-makers and partners from a position of trust, deterring behaviour that is counter to Australia’s interests by contributing to whole-of-government efforts to expose and discourage grey-zone tactics and political warfare, and responding to challenges to the national interest, which includes defeating acts of aggression from malign actors and contributing to humanitarian activities.

The strategy provides two accepted methods for achieving deterrence: ‘denial’ to make it physically difficult for an adversary to achieve an objective, and the ability to impose ‘costs’ if necessary to influence an adversary’s strategic calculus.

‘Working in the grey zone is about having presence in our immediate region on a daily basis rather than sending an aircraft after a disaster and saying, “We’re here to help and this is what we can do for you.” Another key to success will be how well our people know the region and how they deepen relationships with their counterparts to better understand what the region wants us to contribute.

‘We’d prefer to be able to operate there and, as we prepare and build for our security, we’re ready to assist and learn from and work with our partners in the region. That can help build security, prosperity and sovereignty across the whole region, which is good for all of us.’

Much of this is not new, says Hupfeld. The RAAF has for many years been sending aircraft out to do humanitarian assistance and disaster relief. ‘But we want to give people a greater sense of what they can contribute when they do that task, when they’re on the ground at work.

‘And if we go out to support an exercise or an activity anywhere in our region, our people need to know that they are part of that engagement strategy.’

The strategy warns that in the competitive emerging environment the air force can no longer afford to plan to use force without considering to how that fits in with Defence’s broader strategic objectives. ‘This will require a far more nuanced approach to the planning and execution of all activities.’

Hupfeld says the RAAF does not just shape, deter and then respond if the first two steps don’t work. ‘We’re responding every day. Every time we send an aircraft out to do a task and support our region, that’s a response, or if we’re responding to Covid or to bushfires we’re responding. We have to be ready to do that all day, every day, basically, and with all of our assets.’

Such missions include being in Japan to help monitor UN sanctions against North Korea and flying maritime surveillance missions to support Malaysia.

‘We engage in maritime domain awareness with partners in the region to help them identify activity that impacts on their security or prosperity so that they can respond appropriately to actions counter to their national interests’, Hupfeld says.

‘But we’ve got to work with them so that it’s what they want, not what we think they want. These are normal activities and while we’re doing them we watch out for any actions within the grey zone which are pushing up to, and just below, the level of conflict.

‘Our ultimate aim is to avoid moving into a conflict environment’, says Hupfeld.

‘So, in this era of competition, maintaining the right balance of keeping our awareness in place versus “shape”, “deter” and “respond” is what we will be doing all day and every day.’

Brendan Nicholson is executive editor of The Strategist and was published by ASPI on October 31, 2020.

A version of this article appeared in the Weekend Australian.