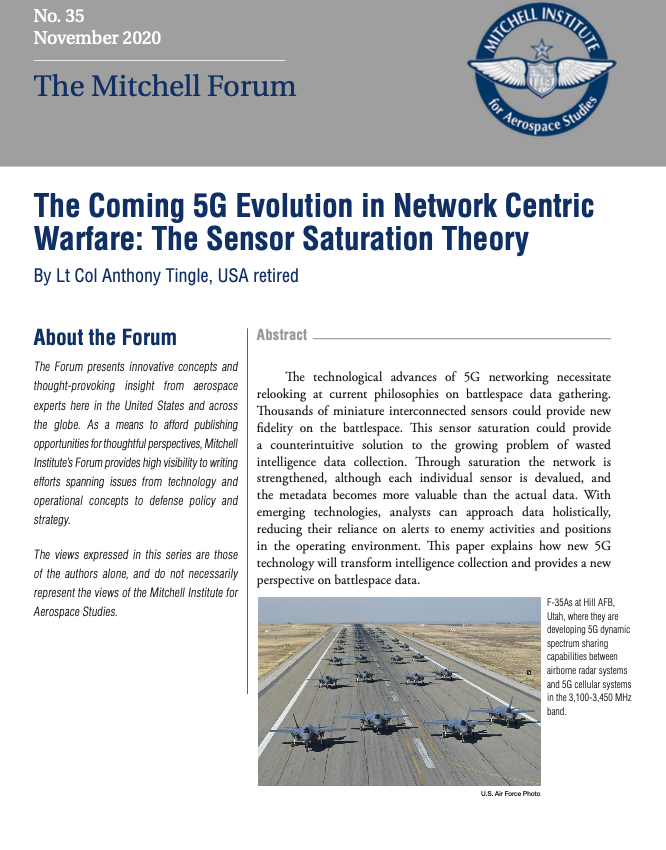 The future of the networked battlespace is a combination of thousands of sensors. These communication technologies will allow networks with endless nodes, each sending data to multiple vectors, effectively blanketing an area of operations with data gathering on a scale familiar to internet- based firms like Google, Facebook, or Amazon that depend on immense amounts of information.

Similar to the information revolution of the 1990s, 5G military technology must follow close on the heels of commercial advancements….

First, 5G inherently produces more coordinated and succinct data. Something very interesting happens when theorizing a message externals-only network. One of the fundamental data fusion problems, configuring the data to be compatible across a network, becomes less formidable as 5G networking uses a standardized protocol (IP).

Additionally, the data that comprise the message externals are minute compared to the internals. Thus, this future network may have the added bonus of less overall actual bits transmitted per sensor.

The military will no longer rely on complex data from individual sensors, rather the large sensor network completes the picture of the battlespace like the many pixels of a television.

Artificial intelligence (AI) can better optimize the extremely large networks of the future by manipulating connections to an otherwise unmanageable number of sensor inputs and maximize efficiency and collection. Although less important in future networks because message externals are extremely simple, AI can also smooth data melding by recognizing different forms of data and converting them to useful information. Lastly, it will be able to make predictions based on big data analysis of the network data.

As previously mentioned, aggregated battlespace intelligence is composed of data from lower echelons, with the finest data comprising the “bit” of intelligence.

Until now, militaries have lacked complete fidelity across the battlespace, relying instead on consolidating spikes of intelligence.

Analysts evaluate each data source relative to other sources of information. Militaries have failed to approach intelligence collection in terms of the absolute aggregate: in other words, having near-complete intelligence.

Having a more detailed picture of the battlespace will require intelligence entities to change their perspective from seeking items of interest (e.g., persons of interest, enemy vehicles, nefarious patterns of life) to monitoring the entire environment and effectively removing the impertinent data.

In other words, instead of looking for the enemy needle in a haystack, we are removing the hay, leaving only the bad actors.

This is essentially the inverse of the way we approach intelligence today.

Lastly, and most obviously, militaries must develop new combat networks that emphasize mobility.

5G cell towers are much smaller than previous generations and should allow for vehicles, robots, and humans in the battlespace to carry small, mobile repeater stations.

Militaries will need to develop capabilities and tactics, techniques, and procedures to mitigate the inability of millimeter wave frequencies to penetrate walls and other structures.

The development of combat employment of 5G capabilities should be ongoing and open to new insights as more and more capabilities are fielded and saturation becomes ubiquitous.

For the complete report, published by our strategic partner The Mitchell Institute, see the e-book version below: