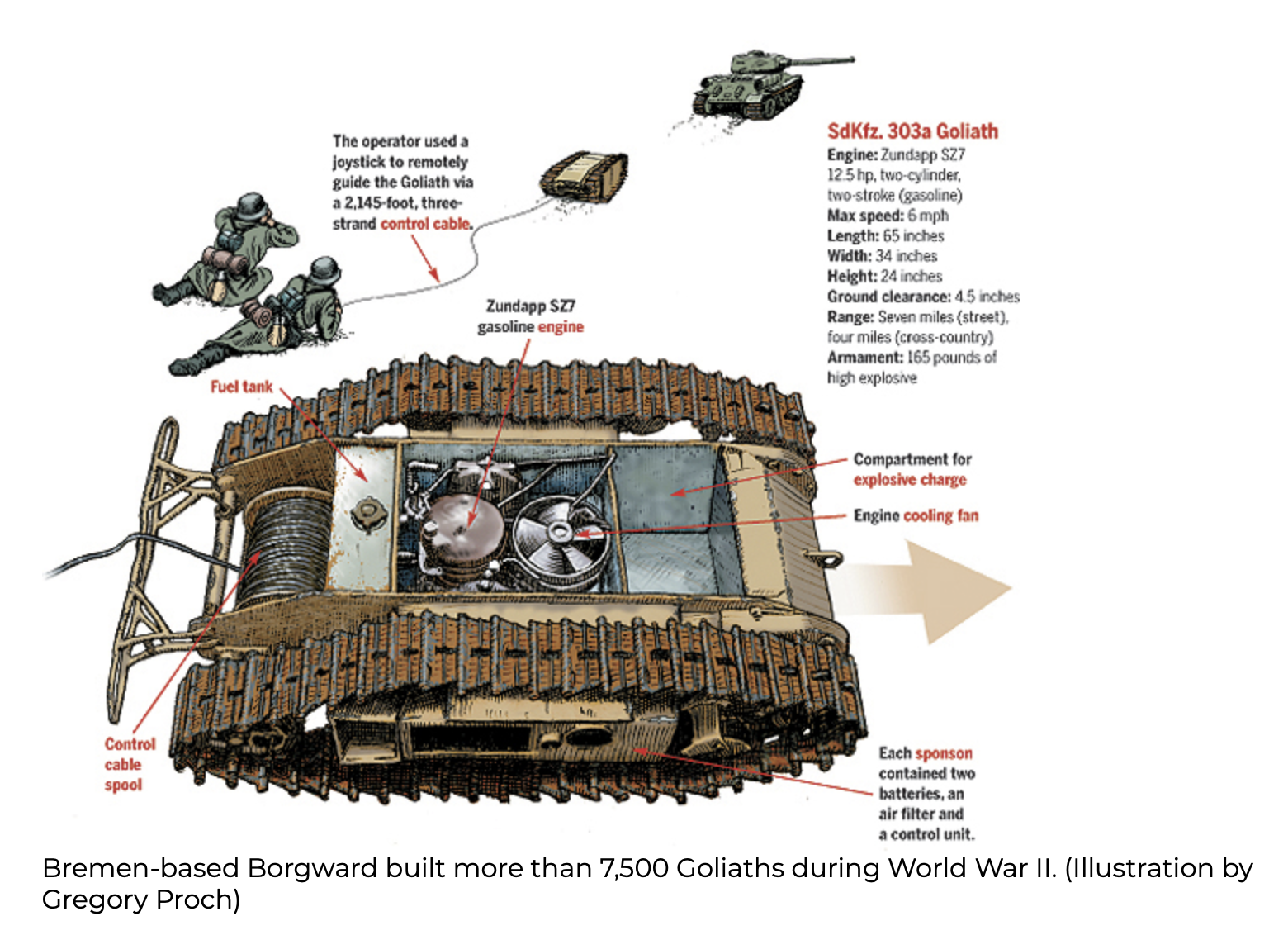 According to an article by Jon Guttman published on History.Net:

In late 1940, inspired by a French miniature tracked vehicle prototype it recovered from the Seine, the Wehrmacht Ordnance Bureau ordered Bremen-based automaker Carl F.W. Borgward to develop a similar vehicle, capable of delivering at least 100 pounds of high explosive to a target by remote control. In spring 1942 Borgward rolled out its SdKfz. 302, nicknamed Goliath, powered by two 2.5-kilowatt Bosch electric motors. Its limited range (less than a mile on flat surfaces) and high cost eventually led to its discontinuance.

In late 1942 Borgward introduced the SdKfz. 303a, powered by a Zundapp two-cylinder gasoline engine with improved street range of more than seven miles. Two years later it produced the slightly larger 303b, which could carry a 220-pound payload. Borgward built more than 7,500 Goliaths during the war. The Allies called it the “beetle tank.”

Operators used a joystick control box connected to the vehicle by a 2,145-foot triple-strand control cable—two strands for steering, one for detonation. Issued to combat engineers and special armored units, the Goliath was designed to disable enemy tanks, disrupt infantry units or demolish strongpoints.

Its control cable proved vulnerable to cutting, however, most notably when the Germans deployed it against the Polish Home Army during the 1944 Warsaw Uprising.

Though the Goliath saw little use, it did serve as the precursor of the modern radio-controlled robotic vehicles.

Two books which I recently read highlighted how the Goliath was used.

The first comes from the fascinating books on D-Day from the German perspective written by the son of a Wehrmacht reporter who leveraged his father’s work in writing his e-books. In his first of two books focusing on the German experience at D-Day, the author has a chapter entitled, “Juno Beach: The Goliath Engineer.”

This chapter is really a unique discussion of this weapon and its use. 1 The second comes from a book commemorating the 75th anniversary of the liberation of Paris.

According to Jean Edward Smith: “In Paris itself, the situation was tense. On the morning of the 23rd (of August 1944), a German armored unit not part of von Choltitz’s command was taking advantage of the truce and moving through the city to the east.

“As it reached the foot of the Champs-Elysees, near Grand Palais, it was fired on by Paris police, with one solider being killed. The Germans responded immediately….

“The Grand Palais was left as a shell, with its interior tonally destroyed.”2