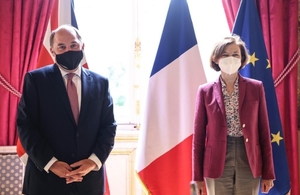 The growing spectre of diverse threats such as terrorism, hostile state activity and climate change underlines the vital importance of the UK-France relationship, the Defence Secretary has said in Paris.

During talks with his counterpart, French Minister for the Armed Forces Madame Florence Parly, in France on Monday alongside the UK and French Foreign Secretaries, Ben Wallace pointed to the shared challenges the two countries face on the European and global stage.

The UK has enjoyed strong co-operation with France since the 2010 Lancaster House Treaties, including tackling Daesh’s terrorism in the Middle East and supporting the stabilisation of the Sahel region of Africa.

The UK-France Combined Joint Expeditionary Force (CJEF) has reached full operating capability, meaning it is able to deploy 10,000 or more personnel on combat operations under one command. Meanwhile, France and the UK are collaborating on ground-breaking capability from next generation missiles technologies to future combat air systems.

The UK helicopters, providing a heavy lift combat support role in Mali, were ideally placed to transport around 60 French troops to secure the area. The Chinooks later lifted a French accident investigation team and an Explosive Ordnance Disposal team to the location south of Hombori. Throughout the sorties the RAF helicopters were escorted by French Tiger attack helicopters.

United by our shared beliefs, I look forward to our continued cooperation with France as we take on the shared threats and challenges we face in an age of constant competition.

During the talks, the Defence Secretary pointed to the ambition of the UK’s recent Integrated Review and Defence Command Paper, bolstered by £24 billion of extra government investment. He said that as leaders in NATO and nations who share truly global interests, the UK and France have a responsibility to stand together, whether through unprecedented cooperation on nuclear issues, championing NATO reform or by supporting collective security from the Black Sea to the High North.

Last month saw the two aircraft carriers HMS Queen Elizabeth and the Charles De Gaulle sail side-by-side in the Mediterranean Sea for the first time. The UK looks forward to strengthening the partnership with greater cooperation in space, cyberspace, Artificial Intelligence and autonomy.

This article was published by the UK Ministry of Defence on July 27, 2021.