On March 24, 2022, the Williams Foundation held its first of two seminars to be held this year.

The seminar was the latest in a series of seminars which started in 2014, and have been focused on the evolution of the ADF to deal with the evolving threats and challenges facing Australia, and its core allies.

The first seminar dealt with the launch of the fifth-generation force, and then over the next few years focused on key elements and building out the force and then since 2018, there has been an increasing focus on shaping new capabilities to extend the reach and the lethality of the force in the growing threats in the Indo-Pacific region.

A key thematic approach woven throughout the assessment process is the challenge of shaping an ADF that is more capable of being built “joint by design.”

And the point of that is to get full value out of any new capability introduced into the force, and, over the past few years, this has been joined with the theme of enhancing Australian strategic resilience and sovereignty with a broader encompassing of Australian political, economic and military capabilities becoming more integrated as well.

This process is reminiscent of what I have seen in the Nordic region, where since 2014, the Norwegians, for example, have focused on “total defense,” or upon how to take a whole of society and government approach to defense. This has been driven by the global challenge posed by the 21st century authoritarian powers whose goals are clearly to reshape the global order to their advantage as well as dealing with the consequences from the breakout of a war with global consequences and impacts, namely, the Russian invasion of Ukraine.

Although the title of the seminar may seem narrowly focused on force building, it was not.

We have entered a new historical era of global conflict, and the challenges posed in the seminar are really about how Australia and its allies shape an effective way ahead.

The next seminar to be held in September 2022, will leverage the most recent seminars, those in 2021 on autonomous systems and building a new space enterprise, and the March 2022 seminar focus on the next steps for joint force design, and address the broader question of force building to deal with the new strategic environment.

Two particular presentations at the seminar underscored the nature of the transition facing the ADF and Australia as a whole.

The first was by Peter Jennings, the executive director of the Australian Strategic Policy Institute (ASPI) and the second by Air Vice-Marshal Robert Chipman, Head Military Strategic Commitments, responsible for the strategic level management and situational awareness of current and potential Australian Defence Force Commitments.

Jennings underscored the core point of the challenge we face, namely, a significant strategic shift in the global environment.

As Jennings put it: “the world’s two most powerful authoritarian regimes have made it very clear that their goal is to break the international order and to remake it under their control. Beijing and Moscow’s separate and shared interests have not been hidden and they made clear publicly for at least a decade. One thing you can say about these authoritarian systems is that they do not disguise their plans.”

And to meet this challenge on the military side, the point is about having extant capability which can meet the challenge, not building an exquisite defense force in some future point in history.

Jennings went back to his 2018 Williams Foundation seminar where he advocated that Australia add a bomber to its capabilities, in this case to join in the U.S. program to build the B-21.

And the underlying point about this is to add strike capabilities in the near term, not the long-term. He argued for the need to jump start Australian defense efforts along the lines of what he called the new German moment, when in facing the war in Ukraine, German leadership have been shocked into a reality zone on defense.

The good news in my view is that Australia has been focused on reality for far longer than Germany, and at the end of the day many of the key elements for shaping an effective way ahead.

And that point was highlighted in the presentation by the former Plan Jericho, co-head, Air Vice-Marshal Robert Chipman. In his presentation, Chipman underscored the importance of integration as a force multiplier which has been a hallmark of when the Plan Jericho effort was first introduced in 2015.

But since that time, such capabilities need to be joined with Australian strategic resilience.

As Australia works enhanced sovereignty and resilience, this effort requires skillful work on the changing nature of alliances as well.

This is how Chipman put it: “There are limits to what a middle power can achieve, that’s why alliances and partnerships are so important. Allies don’t surrender sovereignty to each other, they share it; allies and partners strengthen national power and help mitigate the risks of critical vulnerabilities.

“What does this mean for defense efforts? We need sailors, soldiers, and aviators and public servants who are masters of their domains. We need experts who can integrate across domains, and we need experts that can provide the policy advice and strategy to ensure that our military power is delivered as a coherent expression of national power.

“And there’s a technical dimension to this challenge, prioritizing integration over platform optimization, encouraging the early adoption of new technologies, introducing advanced capabilities and baking in interoperability so that we can mesh with our allies and facilitate cooperation with partners.”

In short, the March 24, 2022 seminar provides a snapshot of where the ADF along with core allies are with regard to the challenge of force integration.

But how best to shape an effective way ahead to prevail against the 21st century authoritarian powers?

And as Jennings cautioned, answers to such a question go beyond simply shaping an exquisite networked force, but requires a broader whole of society and whole of government effort.

The Seminar Approach, Intent and Program

The aim of the March 2022 seminar is to examine progress in the establishment of the 5th generation force and identify lessons which further inform and accelerate Government and industry efforts to design, build, operate, and sustain increasingly lethal and survivable air and space capability.

Since 2013 the Sir Richard Williams Foundation seminars have focused on building an integrated 5th generation force.  Recent seminars have evolved from the acquisition of new platforms to the process of shaping and better understanding the environment in which the integrated force will prepare and operate. Moreover, they have highlighted the challenges of acting independently at an accelerated tempo and in sustained, high intensity, complex operations across all domains.

Almost a decade later, the 2022 seminars will reflect on the journey towards a 5th generation force and identify gaps, opportunities, and priorities for the development of next generation capability in the face of new threats and new risks.

Despite the operational challenges, the framework and apparatus of the 5th generation force is substantially in place. And while there is still plenty of work to be done, the shift from a focus on platforms to a broader appreciation of an integrated 5th generation system of systems represents an important milestone.

The scale of this achievement will be recognised in the seminar and will underscore the critical and ongoing importance of a highly skilled and increasingly integrated workforce across Defence, industry and academia.

The March seminar will set the scene for the September seminar where future force structure and preparedness considerations will be examined to further exploit and accelerate the next generation capabilities.

The seminar in March will identify key lessons from the transition to a 5th generation force. It will highlight changes in the strategic environment and the increasingly sophisticated and time-sensitive ‘lethality-survivability-affordability’ trade-off necessary to build a balanced and relevant force.

While lethality and survivability have always important, what is now different is that they are both increasingly difficult to achieve. And the time imperative means we are always working against the clock to develop and deliver the capabilities essential for the execution of 5th generation operational concepts.

However, despite numerous successes we still find it difficult to rapidly link advanced concepts to fielded operational capability. The seminar will examine the gap between new technology and operational needs, and question whether the current process is fit for purpose. And if not, what needs to change?

The session will consider next generation air power capabilities across each of the Services, fixed and rotary wing, crewed and uncrewed.

Session one will focus upon what has changed since the original concept of integrated 5th generation air combat capability was first introduced into Australian defence planning and thinking. It will highlight the most significant changes to the strategic environment and how survivability has become more difficult to achieve due to an increasingly challenging threat environment.

It will show how the capability building blocks highlighted in previous seminars (electronic warfare, strike, unmanned systems, training, and space etc.) are now being conceived as an integrated system of systems able to compete across each domain.

The second session will focus on the ‘Innovation to fielded capability gap’. It will provide an insight into what has been achieved to date with a particular focus on the defence industry contribution to the establishment of acquisition and sustainment systems. Some areas will be identified as work in progress, and in others where new relationships and ways of working have delivered increased capability and capacity.

The final session will seek gaps and opportunities and areas which are likely to need significant further investment and prioritisation at the enterprise level. Service chiefs will provide insight into their thoughts about the future operating environment and key observations and lessons from the transition to a networked integrated force.  This will set the scene for the next seminar in September.

Industry participants are invited to contribute to the discussion about accelerating and enhancing lethality, survivability, and affordability of the integrated force. The industry perspective should address policy and process improvements as well as the future opportunities provided by new technology and an increasingly integrated defence and industry workforce management model: 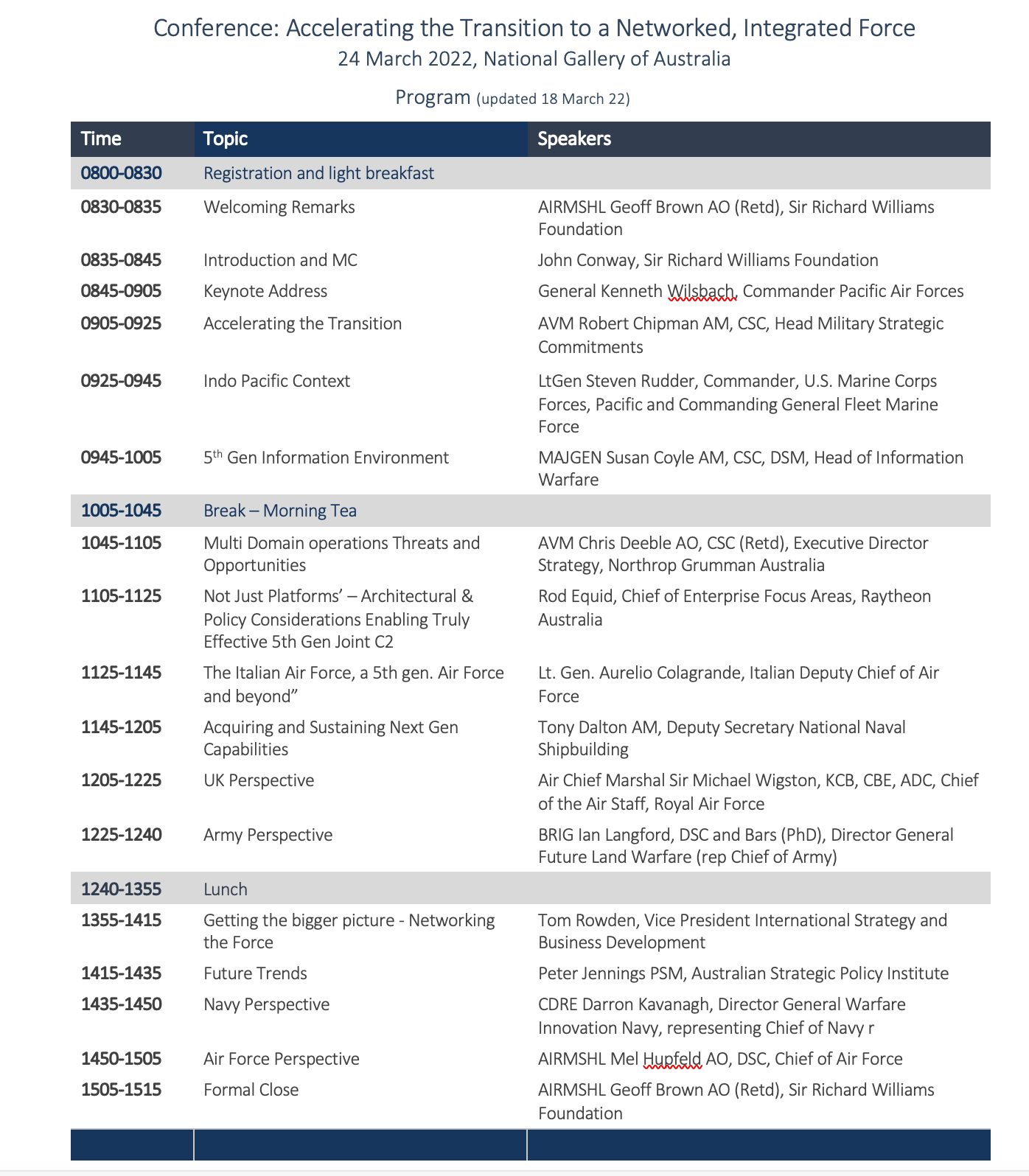