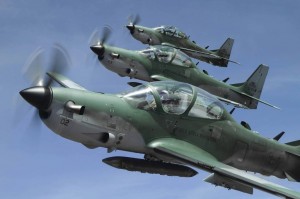 2017-09-04 The Secretary of the Air Force recently loaded up for high visibility on an experiment to examine light attack aircraft options.

Indeed she noted at an Air Force Association Event on August 1, 2017:

We will learn some things, including how fast and cost-effectively we can get capabilities to the warfighter.”

Last time we looked this capability has already been delivered to the warfighter.

What has amazed us about this notion, is that the USAF already has a squadron of Super Tucanos and is working closely with the Afghans on using the plane in combat.

The 81st Fighter Squadron is part of the 14th Flying Training Wing and operates the Super Tucano conducting close air suppor to the Afghan Air Force.

It is stationed at Air Force Base, Georgia.

As Ed Timperlake noted about the amazingly long process that it took longer for the USAF to decide to buy the Super Tucano than it took to fight World War II.

Super Tucano from SldInfo.com on Vimeo.

A key advantage of the Super Tucano has always been its global support structure and there is now a plant in the US to assemble the aircraft as well.

The first one was rolled out in 2014 in Jacksonville Florida.

Apparently, the US Government does not need an experiment unlike the USAF to figure out how to leverage the plane which has already been bought for the light attack aircraft mission.

Today our partner defenceWeb highlighted the Super Tucano potential sale by the US government to Nigeria.

A-29 Super Tucanos Train for Close Air Support Role in Afghanistan from SldInfo.com on Vimeo.

The US Defence Security Cooperation Agency (DSCA) on 3 August announced the possible Foreign Military Sale of 12 A-29 Super Tucano aircraft, along with weapons, spares and training, to Nigeria in a contract that could be worth $593 million.

Congress was notified on 2 August, but more details emerged in the US Federal Register on 28 August.

In publishing the unclassified text of the arms sales notification, the Federal Register revealed Nigeria has requested Paveway II and Advanced Precision Kill Weapon System (APKWS) laser-guidance kits and ammunition. It lists these items as “major defence equipment” valued at $29 million, while the “other” component of the deal, for the Super Tucanos, sensors, training and support, is valued at $564 million.

The DSCA notice said the 12 Super Tucanos will support Nigerian military operations against terrorist organization Boko Haram and to counter illicit trafficking in Nigeria and the Gulf of Guinea.

The proposed sale will support U.S. foreign policy objectives by helping Nigeria to meet shared counterterrorism objectives for the region.

This proposed sale will strengthen the U.S. security relationship with Africa’s largest democracy.

The prime contractor is the Sierra Nevada Corporation…. The company is building Super Tucanos for the Afghan Air Force and Lebanon at its US facility.

Embraer has recorded a number of orders for its Super Tucano from African countries, which see it as a low cost light attack aircraft that can also be used as a trainer. On the continent, the Super Tucano has been ordered by Angola, Burkina Faso, Mauritania, Mali, Ghana and Senegal.

And Lebanon earlier received Super Tucano’s as well from the United States via FMS.

“This is a straight-forward military sale,” Kahwaji said. “This was funded through a Saudi $1 billion dollar grant that was given late last year.”

The point simply put is that we want to train partners to do the low intensity, counter terrorism tasks in their countries rather than US conducting these missions.

It is about training and transfer of relevant aircraft; it is not about building up the slo mo USAF pilot and maintainer force to do tasks which partners need to do, or if not, then not done at all.

And in a time where the North Korean threat is a clear and present danger, putting the senior USAF brass into a media event built around this competition highlights the continuation of slo mo war when high intensity war is on the way.

This is a time to ramp up F-35 buys, deploy aircraft to Europe and the Pacific and bring forward the bomber buy.

Certainly PACOM gets it.

According to an article by CDR David Bentham, US Pacific Command, in an article published on August 31, 2017:

“North Korea’s actions are a threat to our allies, partners and homeland, and their destabilizing actions will be met accordingly,” said Gen. Terrence J. O’Shaughnessy, Commander, U.S. Pacific Air Forces, who just returned from an unscheduled visit to Japan to meet with his counterparts. “This complex mission clearly demonstrates our solidarity with our allies and underscores the broadening cooperation to defend against this common regional threat. Our forward-deployed force will be the first to the fight, ready to deliver a lethal response at a moment’s notice if our nation calls.”

Over the course of the 10-hour mission, the F-35Bs, B-1B bombers and Koku Jieitai fighters flew together over waters near Kyushu, Japan.

The U.S. and ROKAF aircraft then flew across the Korean Peninsula and practiced attack capabilities by releasing live weapons at the Pilsung Range training area before returning to their respective home stations.

“The F-35 embodies our commitment to our allies and contributes to the overall security and stability of the Indo-Asia Pacific region,” said Lt. Gen. David H. Berger, commander, U.S. Marine Corps Forces Pacific.

U.S. Pacific Command maintains strategic bomber and fighter capabilities in the Indo-Asia-Pacific theater, retaining the ability to respond to any regional threat at a moment’s notice.