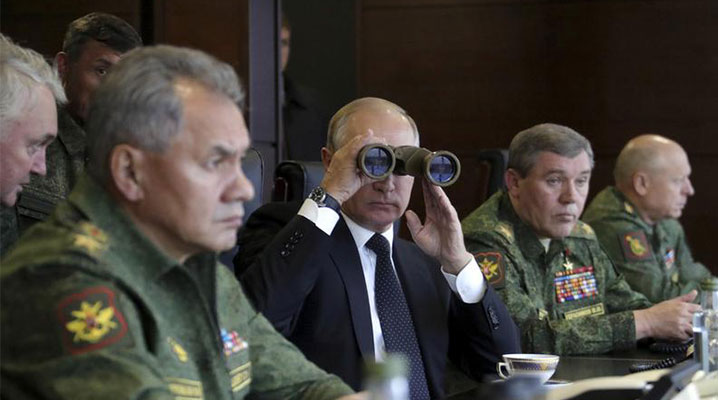 Although the Cold War is not back, the Russians are.

And the Russian challenge is being shaped in the context of several key dynamics very different from the Cold War, which place the nuclear question in a different manner than during the Cold War.

During the Cold War, up until its end in 1989, strategic nuclear parity was a key objective for US policy, for reasons of both national and theater defense.

There was a broad consensus in favor of theater nuclear weapons as a means to prevent the Russians from having any illusions that winning a conventional campaign in Europe would leave them unscathed.

The INF conflicts in the 1980s functioned as a prelude to the end of a certain understanding of nuclear deterrence.

Here the Reagan Administration focused on ensuring that the Russians would not believe that there own missiles directly threatening Europe but not the United States would deter the US and its NATO allies from retaliation, even nuclear retaliation.

The decision to deploy land-based strike missiles on European NATO territory was hotly debated and contested but at the end of the day starting to do so was part of the process of bringing the Russians to the negotiating table and would lead eventually to the INF treaty.

At the same time, the strategic nuclear competition was being capped through Russian and American judgments that there was no real political or warfighting advantage to be gained from pursuing significant asymmetries in strategic nuclear arsenals.

In this sense, the US pursued arms control with the Soviet Union really as an adjunct to defense planning, rather than an end in and of itself.

But thirty years have passed since the end of the Cold War.

And it is in THIS period we need to relook at the question of how nuclear weapons are woven into the fabric of European defense.

The European Union expanded and grew, only now to face serious conflict over its future, and with the prospect of Brexit hanging over it.

NATO expanded eastward but without new forces for the direct defense of Europe and the significant reshaping of US and European forces to operate in the Middle East, rather than to defend Europe against a nuclear-armed continental conventional power.

And added to this the rise of a credible rival to the United States in the form of China and the rise of a nuclear power in terms of North Korea, which both have led to shift in US focus and policies, whether it be Obama or Trump,

Now Europe faces a different Russia and with it a nuclear threat in the new context, one in which the currency of nuclear weapons has grown in value.

Thinking the unthinkable has returned; and with it the realization that nuclear weapons as part of great power diplomacy as well as shaping warfighting approaches and capabilities are a key part of Paul Bracken has called the “second nuclear age.”

As Bracken recently put it:

“What role will nuclear weapons play in major power rivalry?

International politics and technology suggest that their role will be substantial.

But perhaps nuclear weapons will play little or no role. Cyber, drones, AI, hypersonic missiles and so on might obviate the need for nuclear weapons and shift the locus of competition to these technologies.

Many writings about cyber and advanced technologies seem to make this case, because they essentially ignore nuclear weapons altogether, or suggest that they are “confined” to a very small box of remote possibilities. They may be needed; this argument goes, but only in highly unlikely and largely unimag­inable circumstances.

This view of nuclear weapons in major power rivalry is highly appeal­ing.

If we must have nuclear weapons, it offers a way to minimize their impact.

An answer might look like this. Suppose each major power (the United States, Russia and China) had 100 secure, protected second-strike weapons. Nuclear weapons could then be eliminated from the rivalry because there would be no benefit to getting more of them. If a country were to do so, the action would be met immediately, by other major powers responding in kind.

The problem with this perspective is that it narrowly frames the problem of what nuclear “use” really means.

Because the lesson of the first nuclear age, the Cold War, is that you don’t have to fire a nuclear weapon to use it.

There are nuclear head games, as Richard Nixon’s “madman” behaviour showed during the Vietnam War. The Cuban Missile Crisis alerts, brinksmanship, deterrent posturing in the Taiwan crisis, the US maritime strategy in the 1980s and the Pershing missile threat to destroy Moscow command centres all “used” nuclear weapons.

The purpose was to scare the other side, as with maritime attacks that could destroy a high fraction of a protected second-strike submarine force – the US maritime strategy of the 1980s.

Nuclear weapons were also used for easy rhetorical threats, and to sig­nal anger, if not much else. And they were used for defence on the cheap, to cut expensive conventional forces.

Also, they were used for enforcing a status hierarchy in world order. Only Washington and Moscow went to strategic arms control meetings. Beijing, Paris, London and Delhi weren’t invited to this party. This institutionalized the world order into a two-tiered system: the superpowers and all the rest.

Given that there are many ways to use nuclear weapons, when these are considered it seems difficult to accept the naive theory that a new major power rivalry won’t also be a nuclear one. Deterrence is only one criterion. It was the most important criterion in the first nuclear age, and probably will be in the second.

But it is still only one criterion.

If we address Russian capabilities, strategy and their focus in the Europe of today versus the Soviet Union of yesterday, the question becomes where does the nuclear capability fit into their toolbox?

Putin’s Russia is clearly focused on clawing back its place in the world and to be treated as a great power in Europe for sure.

Putin’s Administration has frequently threatened a nuclear response if a particular European country decided to join in the US mission defense system in Europe.

Putin has repeatedly made the argument that US missile defense systems really are part of the US violations of INF, a bit of a stretch but it is part of his nuclear deterrent approach.

Clearly, Putin have been well schooled in the Soviet approach, has focused on trying to isolate particular European states and to pressure them with the use of a variety of means, and to develop hybrid warfare tools to do so as well.

The build up of the Russian missile arsenal, short, medium and long range, with clear violations of INF limitations are designed less to create a so-called anti-access and area denial capability than an arsenal designed to make the recovery of classic conventional deterrence seem beyond reach in Europe.

The anti-access and area denial bit is really about defending the Kola Peninsula, the largest concentration of military force in the world as well as the always vulnerable “European” Russian area.

But with the gaping holes in European defense capabilities and the with the United States working to repair the focus on the land wars, there clearly is a major gap in a credible continental deterrent force.

In this sense the ability to combine hybrid warfare means, significant offensive strike missiles, and an ability to blend in low-yield nuclear weapons in the mix are designed to give the Russians flexibility in coercing European states.

With such an approach, how can European states, European NATO and the United States enhanced a credible warfighting approach which can deter the Russians?

Unfortunately the current state of much thinking in Europe is that the challenge is to keep legacy arms control in place and to have a slow roll approach to conventional deterrence.

Such an environment is an ideal one for the Russian approach to using military power for political gain.

But what might a credible US and European offensive-defensive capability which could leverage nuclear weapons in a crisis look like?

Editor’s Note: A German colleague writing in the 1990s provided a very clear headed analysis of where we find ourselves in 2019 in Europe.

That study can be read here: