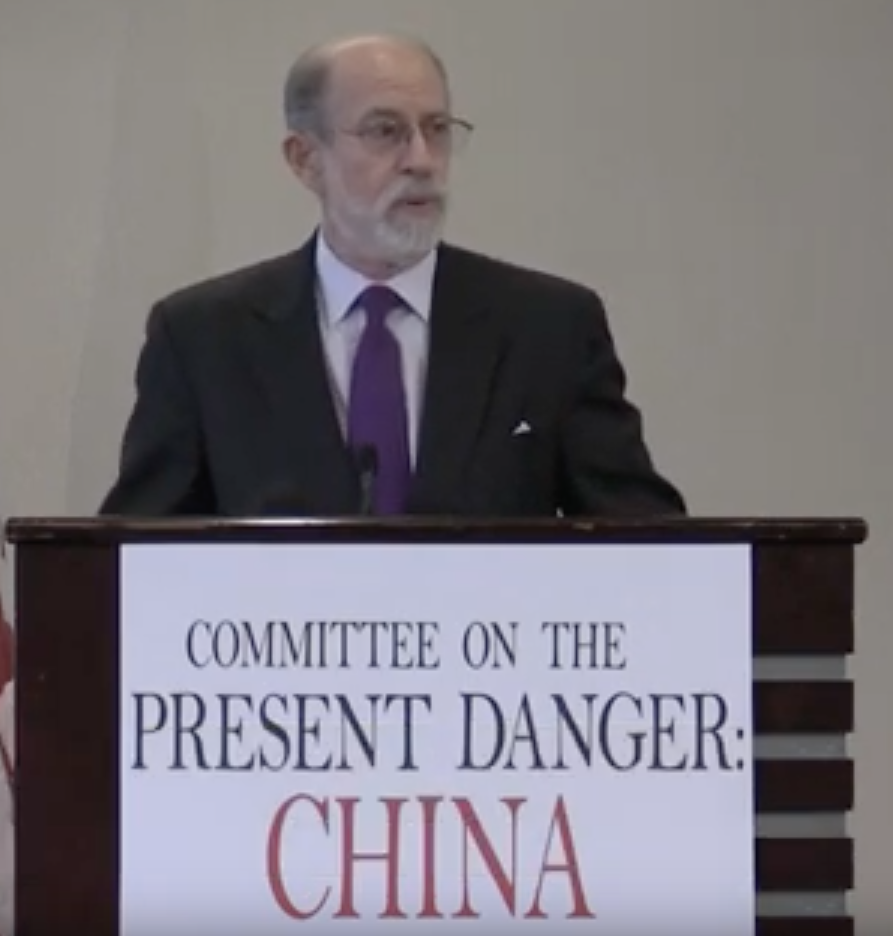 On March 24, 2019, a “Committee on the Present Danger:China” was launched in Washington DC.

According to the website for the group in announcing the launch:

WASHINGTON—A distinguished team of China experts, national security practitioners, business leaders, human rights and religious freedom activists, and others will launch next week the “Committee on the Present Danger: China” (CPDC) to reprise a critically important role played by an earlier incarnation of such a group during the darkest days of the Cold War.

Then, as now, the United States faced an existential threat from an aggressive totalitarian foe. Now, as then, the nation needs to be awakened to the danger posed by the Chinese Communist Party and the country it misrules—and equipped with recommendations for mitigating that multifaceted and growing threat.

The mission of the “Committee on the Present Danger: China” is to help defend America through public education and advocacy against the full array of conventional and non-conventional dangers posed by the People’s Republic of China.

As with the Soviet Union in the past, Communist China represents an existential and ideological threat to the United States and to the idea of freedom—one that requires a new American consensus regarding the policies and priorities required to defeat this threat.

And for this purpose, it is necessary to bring to bear the collective skills, expertise and energies of a diverse group of experts on China, national security practitioners, human rights and religious freedom activists and others who have joined forces under the umbrella of the “Committee on Present Danger: China.”

Second Line of Defense and Defense.info’s Ed Timperlake provided the final presentation at the launch event.

In addition, our colleagueLt. Gen. Thomas McInerney, USAF (Ret.) spoke at the event and highlighted some key issues with regard to the challenge of the theft of US technology by the Chinese government.

Bill Gertz added to our understanding of the effort with a story published on March 26, 2019.

One of the first actions by the committee was to issue a warning on the anticipated U.S.-China trade deal that is said to be close to being completed.

“The trade deal the Trump administration is now negotiating with China is expected to address its Communist Party’s longstanding practice of stealing American intellectual property—the life-blood of our information-based economy and a key component of our national security,” the statement said.

“It remains to be seen whether any new commitments from the Chinese to end this practice will be honored since past ones have not.”

Frank Gaffney, vice chairman of the Committee, said even if a trade deal is reached and China honors its commitments, “we are still facing a world of hurt at their hands.”

“We must address these other dimensions of the problem that ultimately emanate from the character of the communist regime, mainly that it is ruled, brutally, in a totalitarian fashion, by the Chinese Communist Party,” Gaffney said.

Committee chairman Brian Kennedy said the independent, non-partisan group will seek to educate and inform the American public and government policymakers regarding the threat from China ruled by the Communist Party of China.

“The Committee takes no ideological point

of view, rather it relies on the facts as reasonable people can understand them,” Kennedy said. “Armed with these facts, the Committee believes the common sense of the American people will demand from their elected officials that all reasonable measures be taken to defend the United States, our economic interests, and the security of the American people.”

Woolsey, former CIA director in the administration of Bill Clinton, said China is seeking to defeat the United States according to the dictums of the ancient Chinese strategist Sun Tzu—without having to engage in a major conflict.

“We have to be able to turn away Chinese domination of our Internet,” Woolsey said, noting efforts by China’s Huawei Technologies and other firms to control the emerging 5G telecommunications technology.

Boykin, undersecretary of defense for intelligence in the George W. Bush administration, said the Chinese intelligence threat has increased rapidly and through cyber attacks stolen or reverse-engineered large amounts of advanced American technology.

The Chinese strategy against the United States was outlined in a 1999 book by two People’s Liberation Army colonels called Unrestricted Warfare. The book called for using all forms of warfare—military, diplomatic, economic, financial, and even terrorism—to win wars.

The book “laid out the absolute road-map for how they intended to take over America, and they are in the process of doing everything they said they wanted to do in that treatise,” Boykin said.

Boykin said a counterintelligence briefing he received at the Pentagon revealed Chinese intelligence agencies had planted spies throughout the United States.

China’s nuclear arms are built and stored in a massive 3,000-mile-long tunnel complex dubbed the Great Underground Wall and the actual numbers of Chinese warheads in the arsenal is unknown.

“Anyone who says they know how many nuclear warheads China has is either an idiot or a liar,” Schneider said.

Lianchao Han, a former Senate staff member and pro-democracy advocate, said China poses the most serious threat facing the United States yet many Americans are unaware of the danger.

“Engagement and appeasement advocates continue to push for the failed China policies,” Han said. “So it is our duty to inform and educate the American public and decision makers to what the [Chinese Communist Party] really is, what they intend to do, and why they are so dangerous.”

The new Committee is modeled after the original Committee on the Present Danger first formed in 1950s to support President Harry Truman’s national security policies designed to address the “present danger” posed by an aggressive Soviet Union.

That committee was led by James B. Conant, who was involved in developing the first U.S. nuclear weapons, and Tracy Voorhees, an undersecretary of the Army. It included more than 50 experts, academics, and other figures, including William Donovan, the wartime intelligence chief and head of the Office of Strategic Services, predecessor of the CIA. Broadcast journalist Edward R. Morrow was also a member.

In the 1970s, a second Committee on the Present Danger was set up with 141 board members to address national security threats to the United States.

The Committee called for hardline policies toward the Soviet Union and its positions formed the basis for President Ronald Reagan’s peace-through-strength posture. A total of 33 members of the Committee were key players in national security positions within the Reagan administration. Reagan was a member in 1979.

Chet Nagle, a former Navy pilot during the Cold War and a member of the 1970s version of the Committee, said earlier panels were formidable groups initially focused on the Soviet Union and then in the early 2000s the group emphasized countering international terrorism.

“Now another existential threat to America has arisen,” Nagle said of China. “That threat is Communist China’s plan to dominate the United States and ultimately the entire world.

The Committee’s founding statement says: “As with the Soviet Union in the past, Communist China represents an existential and ideological threat to the United States and to the idea of freedom—one that requires a new American consensus regarding the policies and priorities required to defeat this threat.”

To that end the group will work together with a diverse group of experts on China, national security practitioners, human rights and religious freedom activists, and others.

The Commonwealth has announced it has selected the Boeing AH-64E Apache Guardian attack helicopter to replace the Australian Army’s fleet of 22 Airbus Tiger armed reconnaissance helicopters under Project LAND 4503. The AH-64E…

This report brings together a number of recent articles which address the way ahead for Europe and Australia with China. The key question is how to coordinate the efforts of…

The Concept for Robotic and Autonomous Systems (RAS) describes the challenges and opportunities provided by RAS, and what actions Defence must take to create advantage in the future operating environment.…