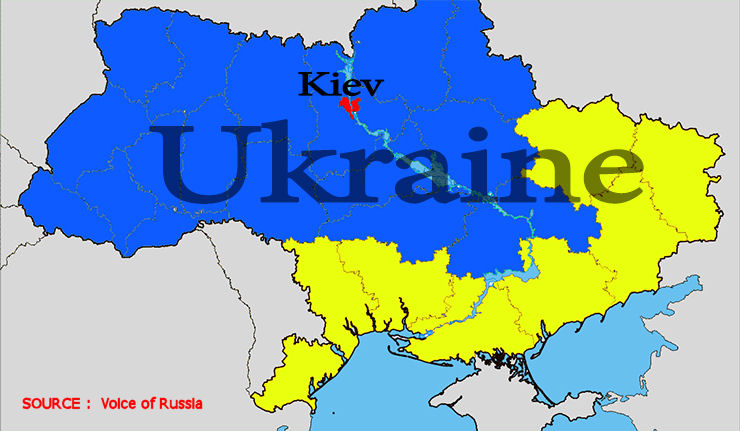 An often ignored aspect of Russian military art is the idea of asymmetry in warfare.

As Vladimir Putin expressed in 2006, “Quantity is not the end… Our responses are to be based on intellectual superiority. They will be asymmetrical and less expensive, but will certainly improve the reliability of our nuclear triad”.

In its classic definition, asymmetry is the strategy of a weaker opponent fighting a stronger adversary. The main idea is, as Clausewitz put it, is that war “…is not merely a political act but a real political instrument, a continuation of political intercourse, a carrying out of the same by other means…The political design is the object, while war is the means, and the means can never be thought of apart from the object.”

As a result, since the objective of war is to achieve political gains, the instruments of warfare may be military or non-military. This means a direct attack followed by territorial occupation and annexation might not be necessary, therefore warfare may be direct or indirect.

In the first case, it means to disarm and destroy the enemy. In the second, it means to wear down the enemy by a process of gradual exhaustion of capabilities, equipment, number of troops, and moral resistance.

One of the best example is the Vietnam War. The Vietcong were able to resist American forces long enough, until they retracted and the war was over. Hence, since the Vietcong achieved their political objectives, even without directly defeating American forces they won the war.

Although, for Clausewitz, indirect warfare was a matter of resistance, the Russian strategy is based rather on Sun Tzu’s idea that “warfare is the art (tao) of deceit… Attack where he (the enemy) is not prepared; go by way of places where it would never occur to him you would go”.

Another important aspect to understand the Russian view of asymmetric warfare is Mao Zedong’s strategy of using regular and irregular forces together.

Mao viewed guerrilla and conventional forces as part of the same mechanism for defeating the enemy. Therefore, attacks were both symmetric and asymmetric, dispersing the enemy’s strength.

However, the most valuable lesson the Russians learned from the Chinese regards the ideological aspect of warfare. This was very well exemplified during the Sino–Japanese War. Since the ideological dimension of war is fundamental for victory, especially during stabilization operations, to win the hearts and minds of the population is decisive. Mao had a clear advantage, since he had a clear ideology to offer, while the Japanese had not.

This is the basis for the Russian strategy of creating an alternative reality as a military strategy. The idea is that support for strategic objectives of war by society in a country at war, in other words, the legitimization of war, is fundamental for achieving victory.

In other words, the success of military campaigns in the form of armed conflicts and local wars is very much dependent on the relationship between military and non-military factors — the political, psychological, ideological, and informational elements of the campaign — then on military power as an isolate variable.15Therefore, asymmetric warfare has the objective to avoid direct military operations and interference in internal conflicts in other countries.

Therefore, as a result of the specifics of fighting weaker adversaries, the following strategy was predominant: employment of small, specially trained troops; preventive actions against irregular forces; propaganda among local populations the weaker adversary pretended to defend; military and material support given to support groups in the country being attacked; a scaling-back of combat operations and employing non-military methods to pressure the opponent. 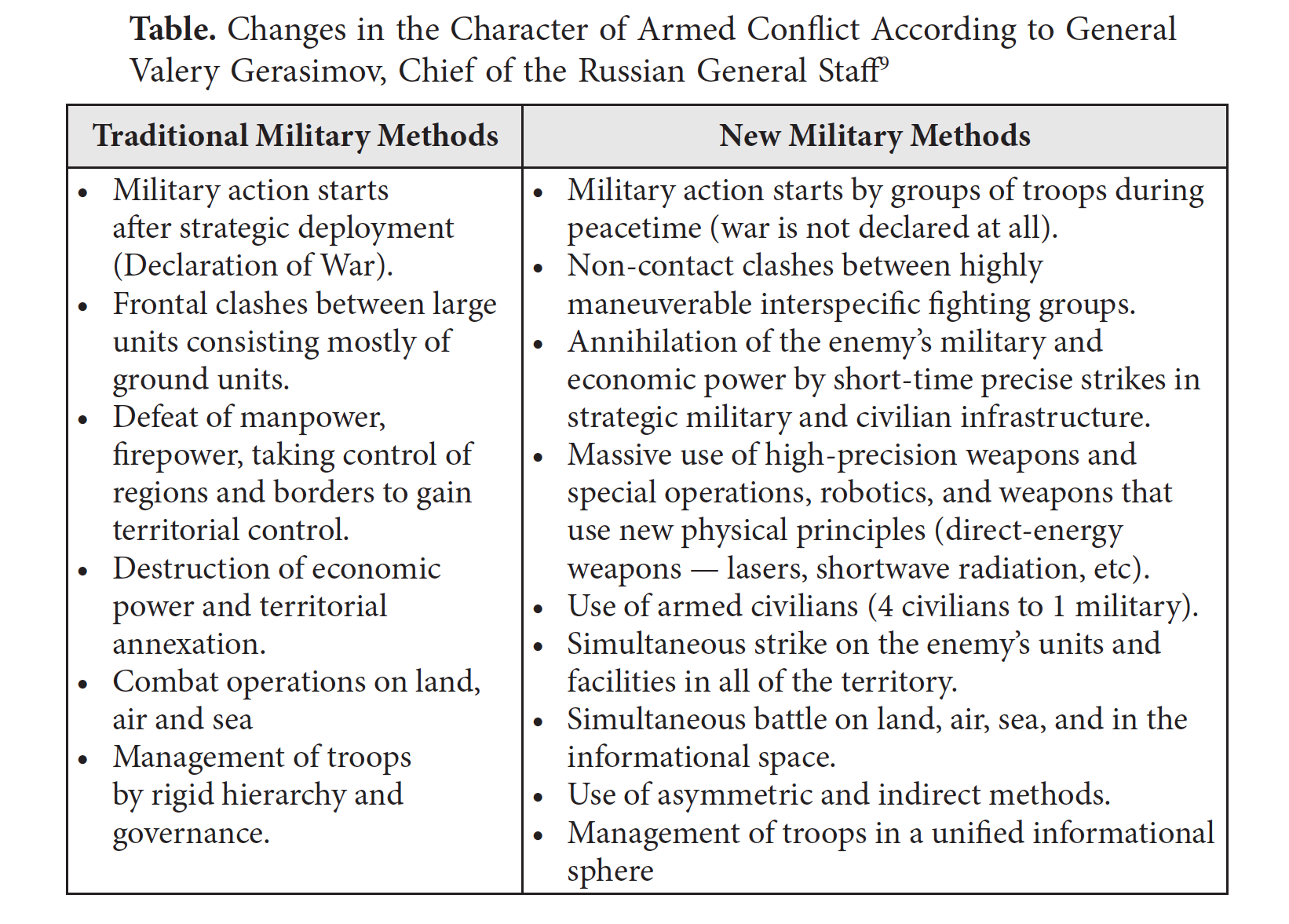 The main instruments of asymmetric warfare to be employed by Russia are:

1) Measures making the opponent apprehensive of the Russian Federation’s intentions and responses;

2) Demonstration of the readiness and potentialities of the Russian Federation’s groups of troops (forces) in a strategic area to repel an invasion with consequences unacceptable to the aggressor;

3) Actions by troops (forces) to deter a potential enemy by guaranteed destruction of his most vulnerable military and other strategically important and potentially dangerous targets in order to persuade him his attack is a hopeless case;

4) Impact of state-of-the-art highly effective weapons systems, including those based on new physical principles (remote versus contact);

6) Seizing and holding enemy territory are not always needed, and are only undertaken if the benefits are greater than “combat costs,” or if the end goals of a war cannot be achieved in any other way;

7) Information warfare is an independent form of struggle along with economic, political, ideological, diplomatic, and other forms;

8) Information and psychological operations to weaken the enemy’s military potential by means other than armed force, by affecting his information flow processes, and by misleading and demoralizing the population and armed forces personnel;

9) Significant damage to the enemy’s economic potential, with its effect showing up at a later time;

10) A clear understanding by a potential adversary that military operations may turn into an environmental and sociopolitical catastrophe.

It is interesting to note that much of what has been written by Russian military experts about Russia’s strategic challenges reflects the way it has conducting warfare. Aleksandr Nagornyi and Vladislav Shurygin, when analyzing Russia’s most important strategic challenges, established ways and instruments the West could employ against it.

Although their analysis is mostly based on Color Revolutions as the result of strategies of controlled-chaos deliberately being employed by the West, it reveals more about Russian strategy itself. They have formalized nine points that, although allegedly could be used by the West against Russia, in reality strongly reflects the Russian asymmetric strategy operationalized in Ukraine.

The nine points are as follows:

1) Stimulation and support of armed actions by separatist groups with the objective of promoting chaos and territorial disintegration;

2) Polarization between the elite and society, resulting in a crisis of values followed by a process of reality orientation to Western values;

5) Stimulation of a socio-political crisis;

6) Intensification of simultaneous forms and models of psychological warfare;

7) Incitement of mass panic, with the loss of confidence in key government institutions;

8) Defamation of political leaders who are not aligned with Russia’s interests;

9) Annihilation of possibilities to form coalitions with foreign allies.

In the field, the discussion above means employing high-precision non-nuclear weapons, together with the support of subversive and reconnaissance groups.

Therefore, Russia’s objective is to make the enemy understand it may face an environmental and sociopolitical catastrophe, avoiding engaging in combat.

This is an excerpt of Jānis Bērziņš’s article entitled “Russian New Generation Warfare is Not Hybrid Warfare,” which was published in Artis Pabriks and And is Kudors, eds, The War in Ukraine: Lessons for Europe (Riga, The Centre for East European Policy Studies, University of Latvia Press, 2015, http://appc.lv/wp-content/uploads/2015/05/War_in_Ukraine.pdf