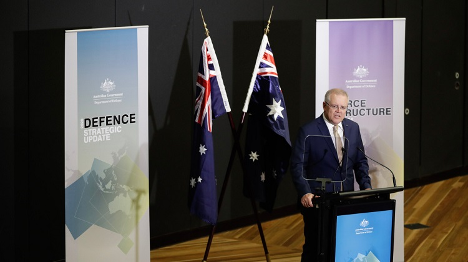 Dubbed the 2020 Defence Strategy Update and the accompanying Force Structure Plan, the two documents will provide guidance on the ADF’s posture and recapitalisation plans for the coming decade – with a growing emphasis on the Indo-Pacific region – and will ensure Australia can respond to threats with credible military force.

“We have been a favoured isle for many decades,” Prime Minister Scott Morrison said at the launch at the Australian Defence Force Academy on July 1. “The only time Australia has faced an existential threat was when the global and regional order collapsed in the 1930s and 1940s.

“Now, we must face the reality that we have moved into a new and less benign strategic era – one in which the institutions and patterns of cooperation that have benefited our prosperity and security for decades are under increasing strain,” he added. “The Indo-Pacific is the epicentre of rising strategic competition. Our region will not only shape our future – increasingly it is the focus of the dominant global contest of our age.”

The Prime Minister highlighted tensions over territorial claims heightening the risk of miscalculation or conflict, unprecedented regional military modernisation, increased capabilities and reach, coercive activities, disinformation and foreign interference, terrorism, and state sovereignty being under pressure as the foundations for the strategy.

Much of what the documents outline has already been announced or is already in build, but there were a few new capabilities and announcements.

In summary, the investment of $270 billion in equipment over the next decade will include a growth in annual defence spending from $42 billion in 2020/21, to $73 billion in 2029/30. Over the same period, the acquisition of new capability will grow from 34 per cent of the annual defence budget to 40 per cent.

While the details will be found in the full documents which ADBR will study and report on in detail later today, the highlights of the package are:

Whereas the objectives outlined in the 2016 DWP gave an equal weighting to Australia’s northern approaches, South-East Asia and the Pacific, the new document will prioritise the ADF’s geographical focus on the area ranging from the north-east Indian Ocean, through maritime and mainland South-East Asia, to PNG and the South-West Pacific.

In the main domains, new capabilities will include:

Spending of between $5 billion and $7 billion on undersea surveillance systems.

The possible acquisition of the Raytheon SM-6 anti-ballistic missile for the Hobart class DDGs.

The acquisition of a surface-to-surface anti-ship missile such as the KONGSBERG Naval Strike Missile (NSM).

The introduction of an enhanced mine warfare capability, with the acquisition of up to eight new vessels that may be based on the Arafura class OPV.

Apart from the replacement of the Tiger ARH capability, the document proposes a new long-range rotorcraft transport in the late 2020s, and an investment in a new “next-gen” rotorcraft in the early 2030s.

The Plan also proposes acquisition of up to 12 riverine patrol watercraft, and several amphibious vessels of up to 2,000 tonnes under the Project JP2048 Phase 5 Future Watercraft Program to replace the retired Balikpapan class LCHs.

Investment in the acquisition of future autonomous vehicles. The Army has already conducted substantial research in this area, converting some of the elderly M113 armoured personnel carriers for remote and autonomous operation.

Confirmation that the RAAF will acquire the Lockheed Martin AGM-158C long-range anti-ship missile (LRASM) for employment from the F/A-18F Super Hornet and other platforms such as the P-8A Poseidon and possibly the F-35A. The acquisition of this system was approved by the US Defense Security Cooperation Agency (DSCA) in February 2020.

The release says the RAAF will have “expanded air combat and mobility” capabilities, including a $10 to $17 billion investment in fighter aircraft.

The air combat part of this could be referring to the ongoing F-35A acquisition, the planned additional tranche of F-35As which is yet to be ordered and would take Australia’s total to 100, the retention and upgrade of the F/A-18Fs, the introduction of an unmanned combat aerial system (UCAS), or a combination of all four.

The air mobility part refers to the “expanded replacement” of the C-130J transport from the late 2020s.

“Remotely piloted and autonomous systems … including air teaming vehicles”, valued at between $7.4 and $11 billion. This is likely referring to the AIR 7000 Phase 1B MQ-4C Triton maritime ISR system, the AIR 7003 Phase 1 MQ-9B SkyGuardian armed RPAS, and the development and possible acquisition of Boeing’s ATS/Loyal Wingman UCAS.

Between $6.2 billion and $9.3 billion has been allocated for research and development into “high speed long-range strike, including hypersonic research to inform future investments for remotely-piloted and autonomous combat aircraft, including air teaming vehicles.”

The Plan proposes a substantial investment in space capability on which the ADF is highly reliant for communications, surveillance, and positioning. Almost all of that capability is delivered through other nation’s assets, particularly the US. In a future conflict, that capability could be congested, degraded, or denied. The investment of up to $7 billion will improve resilience and self-reliance. Much of this funding will go to upgrading satellite communications systems, including satellites themselves and ground control stations under sovereign Australian control.

Up to $2 billion will develop Space Situational Awareness capabilities, to keep track of space junk as well as friendly and other satellites.

The government announced its plans to enhance cyber capabilities on June 30, including offensive and defensive measures designed to protect the Australian mainland and deployed forces. Up to $5 billion will be used to strengthen Defence’s networks against attacks and intrusion by malicious actors. A further $2-$3 billion will go to improving signals intelligence (SIGINT) systems and enhancing top secret information systems.

“There is a new dynamic of strategic competition, and the largely benign security environment Australia has enjoyed – roughly from the fall of the Berlin Wall to the Global Financial Crisis – is gone,” the Prime Minister said. “Since the Government’s 2016 Defence White Paper was released, we have witnessed an acceleration of the strategic trends that were already under way.

Editor’s Note: Obviously, we will have more on the new strategy and force structure dynamics, including upcoming interviews with Australian strategists.

The basic strategy document can be found here: