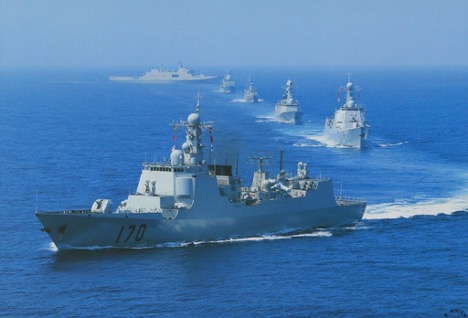 Australia’s recent experience in confronting a range of unprecedented strategic challenges, from the catastrophic summer bushfires to the COVID19 pandemic, has raised questions about the validity of some of our long-sustained paradigms regarding national security.

From our over-dependence on fragile global supply chains, to the role of our military in deterring China’s statecraft, these multi-dimensional challenges demand a tough-minded re-think about Australia’s security partnerships.

While the challenges Australia confronts on the Pacific side of the Indo-Pacific – from the maritime disputes of the South China Sea, to China’s growing influence in Australia’s near neighbourhood – have been extensively analysed, the strategic consequences of the competition playing out in the Indian Ocean generally do not receive the same level of attention.

But the Indian Ocean region (IOR) has become a cockpit of geostrategic rivalry. With a multiplicity of actors vying for access and influence, and with crucial maritime trade routes at stake, Australia’s alignment with regional security partners including India, Japan and the US will be crucial to responding to these challenges.

What are the contours of this competition? Unsurprisingly, the major driver of change here is China. On the one hand, Beijing’s increasing influence in the region is natural extension of its growing military and economic weight – rising powers traditionally expand their military operations to match their interests abroad – and China’s dependence on the maritime trade routes passing through the IOR mark the region a logical nexus for Chinese interest.

But on the other, China’s palpable intention of rewriting the regional order to suit its own interests, and its use of coercive statecraft to achieve those ends, are increasingly drawing the attention of other regional powers.

China’s interest in projecting power into the IOR, whether by expanding its options for military basing or by more frequent deployments of its naval forces (especially its submarines), is particularly troubling to India, Japan, Australia and the US, who share concerns about the threat to sea lines of communication, and regional stability.

And although the Chinese government – for now – is pursuing its maritime basing interests through ‘dual use’ leases on commercial port facilities in locations including Sri Lanka, Djibouti and Pakistan, few regional players are under any illusions regarding the likely militarisation of such facilities.

As one Chinese scholar has argued, “Setting up overseas military bases is not an idea we have to shun: on the contrary, it is our right.”

This is particularly significant in light of the proliferation of submarine capabilities in the region, with Indonesia, Thailand, Pakistan, Bangladesh, Myanmar, Vietnam and Indonesia all joining the ranks of those already operating submarines, including Japan, India, South Korea, Australia and, of course, the US.

Should China secure a deep-water port facility in the IOR to extend the reach of its submarine operations, then a crowded underwater environment in the IOR can only become riskier.

And while the increasing prevalence of conventional submarines will affect the security of maritime trade passing through, it is the spread of nuclear armed submarines that is complicating the region’s strategic risk calculus.

India, for its part, sees China’s maritime power projection into the Indian Ocean, and its access to bases in Pakistan, as a growing threat to its own security.

And although India’s shared border with China (and, of course, the long-running tensions with Pakistan) complicate Delhi’s views regarding its external partnerships, India is nevertheless looking to broaden and enrich its security cooperation with the US, Japan, and Australia to counterbalance these challenges.

Similarly, Japan has begun to play a more proactive role in the IOR, concerned by China’s actions.

For more than a decade China has sought to intimidate Japan through increasingly frequent incursions into its airspace, and by challenging Japan’s sovereignty over the Senkaku islands. Moreover, as Satoru Nagao has suggested, “China’s expansion raises concerns that Japan’s sea lines of communication will be vulnerable to attack from Chinese submarines.”

Although Australia doesn’t face the same immediacy of military incursion as Japan and India, the prevalence of China’s political warfare activities against Australia, and the threat to our economy from any compromise to our maritime trade routes, underscore Australia’s interest in working more closely with regional security partners.

And while the US retains a strong interest in the region, and for now maintains military superiority above any other regional power, it is also evident that major shifts are underway.

This is shown in the Trump administration’s expectation that its regional security partners will do more to pull their own weight, with or without US assistance, and in the extent to which US technological military superiority will persist.

That said, it is clearly in the region’s interest to have the continuing stabilising effect that a US presence brings, as evidenced by Australia and Japan’s continuing commitments to their respective alliances with the US.

So, notwithstanding some differences in perspective and capability between Australia, India, Japan and the US, their shared strategic interest in bolstering the rules and norms of the regional order underscore a renewed interest in the quadrilateral security dialogue, commonly referred to as the ‘Quad’.

China’s efforts to rewrite the regional order have driven home the need for closer cooperation among the Quad partners on economic imperatives, diplomatic messaging, military cooperation, and standard setting.

All four have a shared interest in deterring the use of coercive, forceful measures in the political, economic, and legal affairs of the region, and in preventing any regional state from becoming dominant.

And with their economic wellbeing contingent on the continued free movement of maritime trade through the IOR, the Quad members have a vested interest in ensuring the region’s sea-lines-of-communication remain free from interference.

As Lavina Lee has argued, “from a strategic perspective, the primary value of the Quad is to signal to Beijing that the four states share the intent to counter and thereby deter future Chinese actions to further change the status quo”.

And, as we’ve seen in the South China Sea, China’s coercive statecraft is not limited to the military sphere. Rather, its extensive program of state-sanctioned influence involves the coordinated deployment of all the elements of its national power to ‘win without fighting’.

Moreover, all of this is happening despite the Quad partners’ acquisition of advanced networked warfighting platforms.

This suggests that the possession of these highly-capable systems is a necessary, but not sufficient, response to China’s holistic approach to wielding influence.

Indeed, as Mike Scrafton has argued, Australia can’t materially alter the course of these events – or even mitigate their consequences – just by increasing military spending.

This raises the question of how Australia’s instruments of national power, including its air and space power, should be employed in the Indian Ocean region to counter these problems and, more positively, to create opportunities to enhance Australia’s interests.

As former US Defense Secretary, Robert Gates recently argued, “as essential as it is to build and maintain a strong military, it is just as – or more – important to know when and how to use it”.

In the IOR, this points to the benefits that will arise from cooperation in non-traditional aspects of military operations.

While traditionally the military focus has been on combat power and the delivery of force, the contemporary proliferation of alternative vectors for influence, including in the information and economic domains, has lent a new urgency to considering more holistic models. NATO has suggested that, “even lethality, the ultimate penalty of physical force, is giving way to abstractions of perception management and behavioural control, a fact which suggests that strategic success, not tactical victory, is the more coveted end-state”.

So, where previously our armed forces have focused on force projection as a key requirement, the time has come to weave defence’s capabilities into whole-of-government options for ‘influence projection’.

Rather than narrowly focusing on dominating the battlespace with forward-deployed force elements, air and space power can broaden its value by complementing whole-of-government efforts to out-position rival powers in economic, diplomatic, and informational influence campaigns.

As China has aptly demonstrated, coercion does not necessarily involve the application of physical violence; influence comes in many forms and can apply to peacetime and wartime situations, as well as those between.

A fundamental dimension of Australia’s ability to do all this will be the extent to which its tools of statecraft have the necessary access, presence, and persistence to wield influence in the Indo-Pacific.

This underwrites the potential strategic benefit to be gained from a reinvigorated Quad. Closer cooperation between India, Japan, Australia, and the US offers rich potential for enhancing each of those partners’ influence in the region.

For our military forces to contribute to the Quad’s ability to enhance maritime security in the IOR, information sharing among the partners takes on a strategic quality.

As former US Navy Admiral James Stavridis observed, “shining a light through intelligence and information sharing can deny an adversary the ambiguity he seeks. This can be done by linking international partners to observe and record activities”.

It makes sense for Australia to explore options for unclassified information sharing with its Quad partners.

Considering the significant expansion of submarine threats in the region, this is where the issue of maritime domain awareness becomes particularly important. As Christian Bueger and Anthony Bergin have argued, “maritime security-related issues represent some of the most valuable security areas for cooperation. A key to addressing these challenges regionally and nationally is maritime domain awareness”.

The intelligence, surveillance, and reconnaissance (ISR) capabilities available through air and space power provide significant opportunities for such cooperation.

Information sharing could involve the exchange of data in areas such as commercial shipping traffic, climate, meteorological and oceanographic data. This could have significant benefits in building shared perceptions and understanding of the flow of seaborne traffic in areas of joint strategic interest. As confidence among Quad partners grows, it could contribute to higher-end capabilities such as anti-submarine warfare (ASW).

By contributing to information sharing options among the Quad partners, Australian air power can bolster regional resilience against these coercive methods.

Thinking about aerospace cooperation within the Quad needs to go beyond traditional platform-centric models.

By taking an incremental approach which builds confidence through information sharing on maritime domain awareness, the partners can, over time, develop new concepts of cooperation in influence operations that specifically target China’s coercive tactics that fall below the military threshold.

This article was written by Peter Hunter and published by ADBR on July 13, 2020.