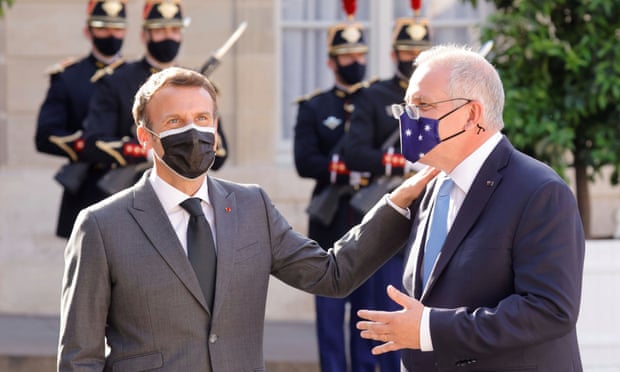 The Australian strategic decision to move from a path to build a diesel attack submarine to a nuclear one has not been a simple Australian platform decision.

It has occurred in a broader global context and has unleashed a raft of charges and counter-charges among allies, all of which are partially true, but at the end of the day takes the liberal democracies backwards and not forward to find ways to work together to protect their interests against the global authoritarians.

The volume of global comments on the Australian decision  has been significant with most analyses operating as intellectual versions of taking a Rorschach psychological test for an individual. It is worse than mere finger-pointing, because commentaries operating as Rorschach tests tap deep cultural emotions.

From some French commentators we learn that this decision was a “new Trafalgar.” Given that this was an Australian decision with the UK playing a relatively minor role, this is simply wrong, unless you think Boris Johnson somehow is Lord Nelson.

From some Australian commentators, we go back to the days of French nuclear testing in the region and the disregard of Australian interests. Or we are reminded of the Greenpeace affair.

And from some British commentators we are reminded of French proclivities to pursue their own national interests at the expense of their allies.

Augmenting the intellectual discord among Australia’s allies is the nature of the UK and U.S. leaders who announced the decision.

For President Biden, this was a welcome break from the impact of his Blitzkrieg withdrawal from Afghanistan on virtually all U.S. allies.  One can simply look back to his treatment of the British in terms of declaring a new Atlantic Charter in June, his Sec Def signing a new carrier agreement in July, and then the pull the rug treatment in August.

For Prime Minister Bo Jo (to go along with Joe), this was proof of the new launch point post-Brexit of “global Britain.”

But the fundamental facts that led to the UK withdrawal from the Pacific many years ago have not changed. Britain will struggle mightily after Brexit and COVID-19 to have a credible recovery strategy.

And with the Chinese deeply embedded in the UK economy, there is little doubt that the Chinese will remind Britain of this fact in very concrete ways.

Although announced as a new tripartite agreement, I would not carried away with this claim. It really is a defense technology agreement, which is focused on weapons, on submarines and adjacent digital technologies.

It is important, but not some kind of globally significant new alliance. Let us get real here.

And if we return to Australia itself, the role of working with the U.S. forces in the Pacific is a major one, and as the U.S. military works through ways to enhance ways to operate with enhanced survivability and force distribution, working with Australia is of growing importance.

But in all my discussions with  U.S. Pacific forces, there is a very clear understanding that working with Australia is not about basing U.S. forces on a permanent basis but to use General Carlyle’s formulation when he was PACAF, “it is about places, not bases.”

I have little doubt that when Australia builds out its submarine bases to accommodate nuclear submarines that allies will visit and work with the Royal Australian Navy in a close and coordinated way. I would expect to see British, French and American nuclear attack submarines to become part of the ADF landscape over time. And for the Aussies as well in reverse.

But now we come to the question of France, its reactions and shaping the way ahead.

The reaction by the government is very understandable.

This is a major blow on several levels.

For me, recalling Ambassadors was a bit over the top right up there with the American Congress changing French Fries to Freedom Fries when the French government refused to join in the second Iraq War.

At the end of the day, one has to figure out how to shape a way ahead.

At bottom, this is really up to the French and the Australians.

There are many ways to do so, but if we limit ourselves to the defense realm, one path to do so would be to expand the role of European weapons manufacturers in the newly launched Australian weapons enterprise. Obviously, the core candidate for this is MBDA, the most successful UK-French defense collaboration in recent years.

A second way to do so might be to consider adding new lift capabilities to the RAAF as well, with close consideration of an A400M buy. This also has the advantage of being an airlifter that can be modified to launch missiles out of the back of the aircraft as well.

But for the European Union there is a much deeper problem, and that is in terms of coming to terms with the Chinese engagement in Europe and the Chinese Communist agenda of using trade and investment to build out its capability to control, incentivize and disrupt European policies.

There is a broad perception among European publics that China is in the far, far away world of the Indo-Pacific.

But this is flat out wrong.

The Chinese Communist regimes and its representatives are in Europe in force, and their commercial interests are very different from those of liberal capitalist firms.

It seems to be too forgotten by the European Union leadership in Brussels that while China was ramping up its pressure on Australia last year, the EU was working a trade deal with China. The Chinese leader made no secret of how helpful he saw this in the global competition, but frankly the EU leaders seemed not to care.

The EU, the United States, Australia and all liberal democratic societies after the impacts of the pandemic clearly need to take a hard look at supply chains and manufacturing and ensure that they are secure and reliable, and not dominated by the authoritarian powers.

After the golden age of globalization with its agnostic politics, this is hard to do.

But then again so is having free societies. Australia is a key player in such an effort, and any thoughts on the EU side that not pursuing a trade deal with Australia after having engaged in such an effort with China would be an historic mistake of the first order.

And far more significant than working through the pain of an Australian decision with regard to its future submarine.

The featured photo is credited to Pascal Rossignol/Reuters and was taken from the following source:

Note: To understand how the contract flow was structured by Australia working with Naval Group it is useful to look at the details of the approach as highlighted by the January 2020 report by the Australian National Audit Office.

The graphic below from the report highlights that the contract now being completed is for the preliminary design. What was anticipated next was a longer phase for shaping the detailed design and shaping a way ahead to manufacture the submarine.  That detailed design phase will now not proceed. 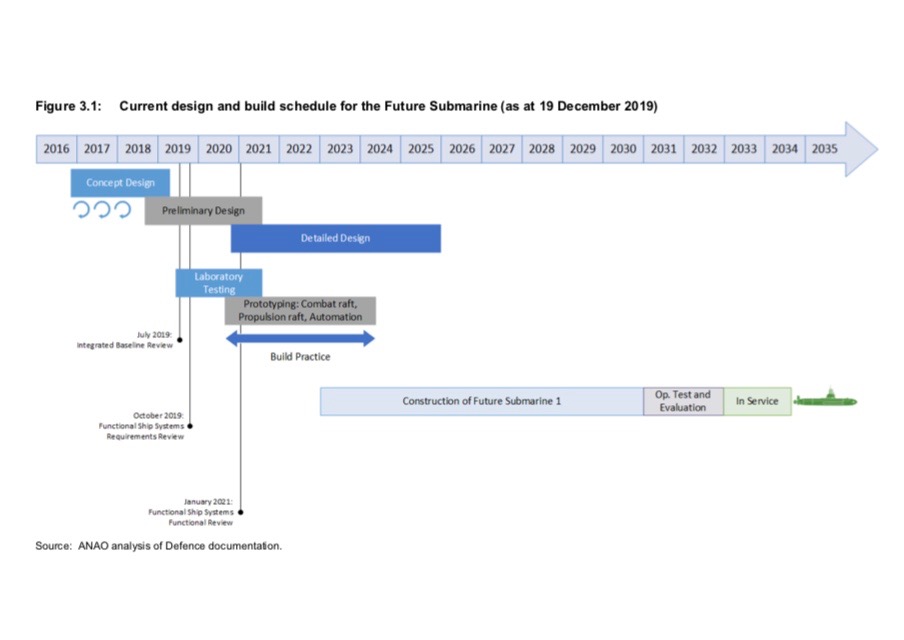