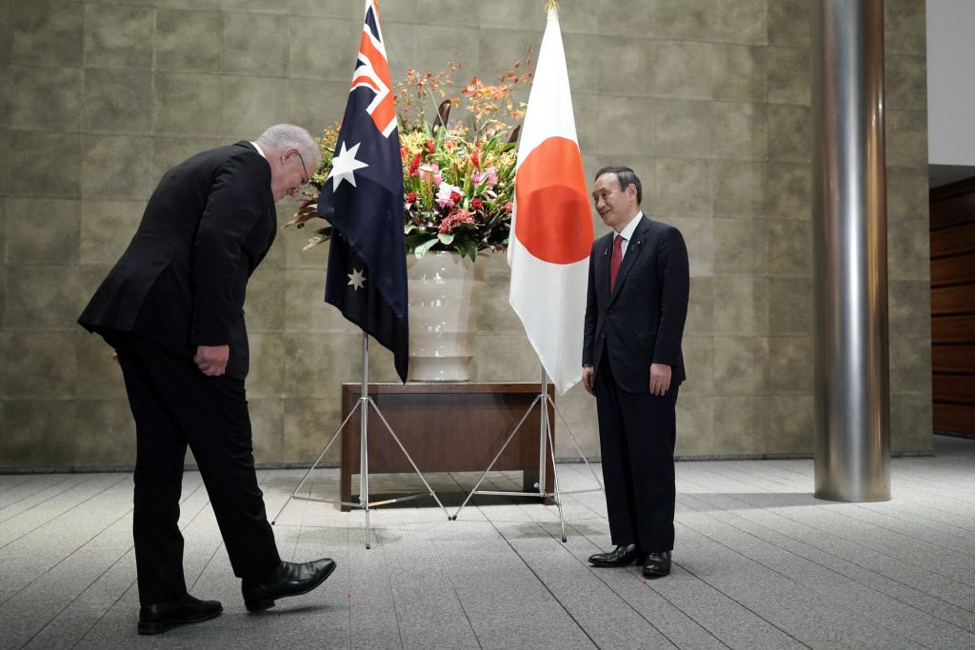 Australia’s strategic value to Japan can be summed up in three points. Australia is Japan’s partner in bearing the torch of democracy, a quasi-ally with which Japan will work to maintain the Indo-Pacific as a free and open region, and a force multiplier for Japan and its alliance network. Japan’s strategic value to Australia can be described in the same way.

In 2049, the Chinese Communist Party will celebrate the centenary of the founding of the People’s Republic of China. Until then, it will continue to build its economic and military strength, seeking to expand its dominance in the Indo-Pacific. As this trend accelerates, Australia’s strategic value to Japan is also destined to increase.

Australia has never been unimportant to Japan—the trade relationship dates back to 1957. Australia’s supply of iron ore, bauxite, coking coal and natural gas was the lifeblood for Japan’s rapid economic growth. They say Australia is a lucky country endowed with natural resources. Japan was no less lucky to have Australia as a key trading partner.

Early in the 1980s, Tokyo and Canberra together launched the Asia–Pacific Economic Cooperation forum, creating the framework for the economic growth of ASEAN nations. Since then, a relationship focused on trade has evolved into one providing a vision for the region’s future. Economics and trade have been the alpha and omega of the Australia–Japan relationship. In recent years this has begun to change.

Prime Minister Shinzo Abe’s administration in Japan, from 2012 to 2020, deepened and broadened the strategic nature of the Australia–Japan relationship. It also gave a strategic dimension to the trade relationship. Abe dealt with three Australian prime ministers, all of whom made the relationship geopolitically relevant.

One outstanding Abe achievement was bringing to life the Quadrilateral Security Dialogue involving the United States, Japan, Australia and India. At the end of December 2012, as he began his second term as prime minister, Abe wrote an article for Project Syndicate, ‘Asia’s democratic security diamond’, arguing that Indo-Pacific security should be the responsibility of a diamond formed by Australia, India, Japan and the US. Abe decided that was too much like blowing his own trumpet and he has not used the term ‘diamond’ since. Whatever one calls it, the Quad is the realisation of Abe’s vision.

It is too early to discuss how the Quad should be institutionalised and whether it should expand its membership. What is important is that the four countries’ leaders have agreed to foster the habit of cooperation. Seeds have been planted that will grow into the future. The focus is solely on security, on working together to achieve a free and open Indo-Pacific.

Abe broadened the interpretation of Japan’s constitution, which had become too rigid and outdated, and significantly expanded the scope of joint action between allied forces and the Japan Self-Defence Forces.

Compared with the Australian military’s history of joint operations with the U.S. military, as in Korea and Vietnam, the changes that have finally taken place in Japan are modest. But the Chinese People’s Liberation Army cannot underestimate the significance of Japan and its partners becoming force multipliers for each other.

Australia is both a Pacific and an Indian Ocean power, and that is where its unique value lies. Japan and Australia, along with the U.S. and India, will continue to play a role in making the Indo-Pacific a free and open place. Japan and Australia are now partners raising the torch of democracy.

When Australia and Japan signed a trade agreement in 1957, the Japanese prime minister was Nobusuke Kishi. By an accident of history, his grandson, Shinzo Abe, eventually succeeded in forging the most advanced form of free trade agreement, an economic partnership agreement, between Australia and Japan. In addition, Prime Minister Malcolm Turnbull and Abe rescued the Trans-Pacific Partnership Agreement (now known as the Comprehensive and Progressive Agreement for Trans-Pacific Partnership, or CPTPP) from the brink of death when U.S. President Donald Trump dealt it a blow.

Any country that maintains state control and political party involvement in business management does not deserve to be part of the CPTPP. By building on their economic partnership agreement, Japan and Australia have created a free, transparent, rules-based economic system that spans the Pacific, using the trust fostered by economics and trade as a lever.

The fact that the UK is about to join the CPTPP, and that the CPTPP has provided the impetus for the EU and Japan to establish their economic partnership agreement, also demonstrates that Japan and Australia have become partners in sharing the responsibility for maintaining a democratic and free economic system on a global scale.

Both Australia and Japan have a track record of fostering democracy while respecting social pluralism. Both Tokyo and Canberra know that their democracies will never be complete.

To abandon democracy and become Leninist is unthinkable either in Australia or in Japan. In China, there’s a risk that the Chinese Communist Party’s stranglehold will collapse and the system will be replaced by something else. Both Australians and Japanese believe in the values of democracy. Even if democracy is on the wane elsewhere, they are willing to raise the flag of democracy. And there is the Quad, with Japan and Australia as its northern and southern pillars.

Australia, as seen from Tokyo, is a pillar of democracy, perhaps more so than Australians realise. It’s not for nothing that Japan, with its rapid growth, has Australia so close at hand. It’s a blessing for the whole world that Japan and Australia can now work together as dependable partners in uncertain times.

This article was published by ASPI on September 2, 2021.