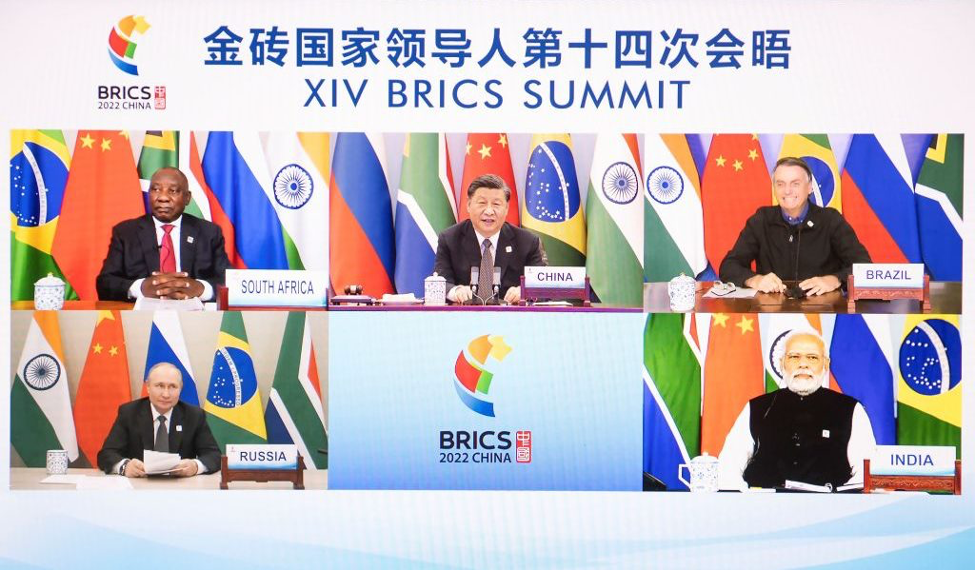 The virtual summit of BRICS leaders in Beijing late last month brought a slew of proposals to strengthen the group’s economic and geopolitical influence.

Russian President Vladimir Putin unveiled a plan for a new reserve currency based on a basket of the currencies of the five members, Brazil, Russia, India, China and South Africa, while also promoting the use by members of Russia’s financial messaging system as an alternative to the western-dominated SWIFT network that Russia was barred from in the wake of its invasion of Ukraine.

China’s vice–commerce minister Wang Shouwen suggested establishing a free-trade agreement among the five, noting that although they collectively represented about a fifth of world trade, only 6% of their trade in goods and services was with each other. None currently has so much as a bilateral trade agreement with another.

Perhaps most significant was Chinese President Xi Jinping flagging expansion of the group’s membership. ‘Bringing in fresh blood will inject new vitality into BRICS cooperation and increase the representativeness and influence of BRICS,’ he said.

‘It is important to advance this process to allow like-minded partners to become part of the BRICS family at an early date.’

Like a character in a novel springing to life, the BRICS group of nations leapt off the pages of a 2001 Goldman Sachs research report to become a global institution with ambitions to become for the emerging world what the G7 is for advanced nations. The aspiration is for it to become the peak body for the emerging nations capable of coordinating economic policy.

Leaders’ summits of the five nations have been held annually since 2009. The group has established an infrastructure-funding institution, the New Development Bank, and has also organised a ‘liquidity fund’ to support members in the event of a financial crisis. Other efforts to institutionalise the grouping include cultural programs and a BRICS sporting tournament.

Yet the organisation is hampered by the fact that the five economies have very little to do with one another, with little commonality of purpose. While China and Russia would both like the BRICS to become the anti-G7 that rallies the emerging world in opposition to the ‘hegemonic’ West, both India’s Narendra Modi and South Africa’s Cyril Ramaphosa flitted from their screen-based BRICS summit to the Bavarian Alps to participate as observers at the G7 summit, to which they had been invited, along with the leaders of Indonesia and Senegal (which holds the presidency of the Organisation of African Unity). For Modi, it was his third G7 summit, which he sees as testimony to India’s status as a great power.

The original 2001 Goldman Sachs paper highlighted the size and growth prospects for Brazil, Russia, India and China (South Africa was a later addition to the group) and argued for their inclusion into global governance. A follow-up paper in 2003 predicted that by 2040, the four original BRIC nations would have a combined economic weight greater than the six major nations of the G7 (excluding Canada). By the early 2000s, the G7 appeared anachronistic as a forum for shaping global economic policy given the growing importance of the developing nations.

In reality, moves for expanded global governance had already been taken with the formation of the G20 in 1999 (initially as a finance ministers’ group) however the four countries latched onto the idea of becoming the peak body for the emerging world, which was otherwise represented by the unwieldy United Nations–based ‘Group of 77’ (which in fact now has 134 members).

As a group, the BRICS have argued for greater representation for emerging nations in multilateral institutions including the International Monetary Fund, the World Bank and UN institutions. However, they have never taken a coordinated stance on broader economic policy issues within the G20 or elsewhere.

The trade and investment links between the nations are weak. There has been no real growth in trade between the five members since 2011, and the trade that does take place is mainly the sale of primary products by Brazil, Russia and South Africa to China, and China’s sale of manufactured goods in return. Excluding China, internal BRIC trade is less than 3% of the total exports of Brazil, Russia and India, and 6% for South Africa.

A Brazilian study shows only 0.1% of Brazilian offshore investment is in fellow BRICS nations, while the corresponding figures for other members are Russia 0.4%, China 2.3%, India 3% and South Africa 24%.

Although Wang spruiked the potential for a BRICS free-trade agreement, there was no mention of this in the final communique. India demonstrated its reluctance to join any trade deal that included China by pulling out of the Regional Comprehensive Economic Partnership in 2019. Even Russia and China have only a trade-facilitation agreement which comes under the Russia-led Eurasian Economic Union.

Putin’s proposed new reserve currency was also not mentioned in the ‘Beijing declaration’ at the conclusion of the BRICS summit. The notion would be to create a product like the International Monetary Fund’s ‘Special Drawing Rights’ (SDR), which is based on a basket of the most liquid member currencies. As the global head of markets for the ING banking group, Chris Turner, noted, the primary considerations for a reserve currency are safety, liquidity and return.

The cost of insuring against the default of five-year bonds issued by BRICS countries is more than 20 times higher than the cost of similar insurance against SDR currencies. Although the returns on BRICS currencies are higher than for the US dollar or the euro, their liquidity is poor. ‘We doubt the mercantilist nations involved in BRICS would want to transfer valuable FX reserves into this more local sphere of influence,’ Turner said.

Even Xi’s dream of expanding BRICS membership may be hard to achieve. China, as this year’s chair of the BRICS, invited the foreign ministers of Argentina, Kazakhstan, Saudi Arabia, Egypt, Indonesia, Nigeria, Senegal, the United Arab Emirates and Thailand to attend a BRICS foreign ministers’ meeting in May.

According to the Pakistani media, China also wanted to invite Pakistan’s foreign minister but this was vetoed by India. Turkey, which is sometimes named as a candidate, might not get the support of Russia, while Mexico may be seen as too close to the United States.

Argentina has taken up an invitation to join the BRICS development bank, which it sees as a precursor to joining the group. However, existing members may be reluctant to extend access to the group’s ‘contingency reserve’ to a country whose economy is so notoriously mismanaged. Iran has also expressed its wish to join the group.

As the final communique emphasised, the existing five members needed to ‘clarify the guiding principles, standards, criteria and procedures’ governing the admission of new members before there could be any expansion.

The G7, like the BRICS, is also a somewhat arbitrary grouping with no claim to act in the interests of anyone else. Relations between its members have also been fractious at times, notably during the Trump administration. However, the economic links between the members are robust, including a large share of their trade and investment, and they have proven able to coordinate their economic policies at points of international crisis.

David Uren is a senior fellow at ASPI.