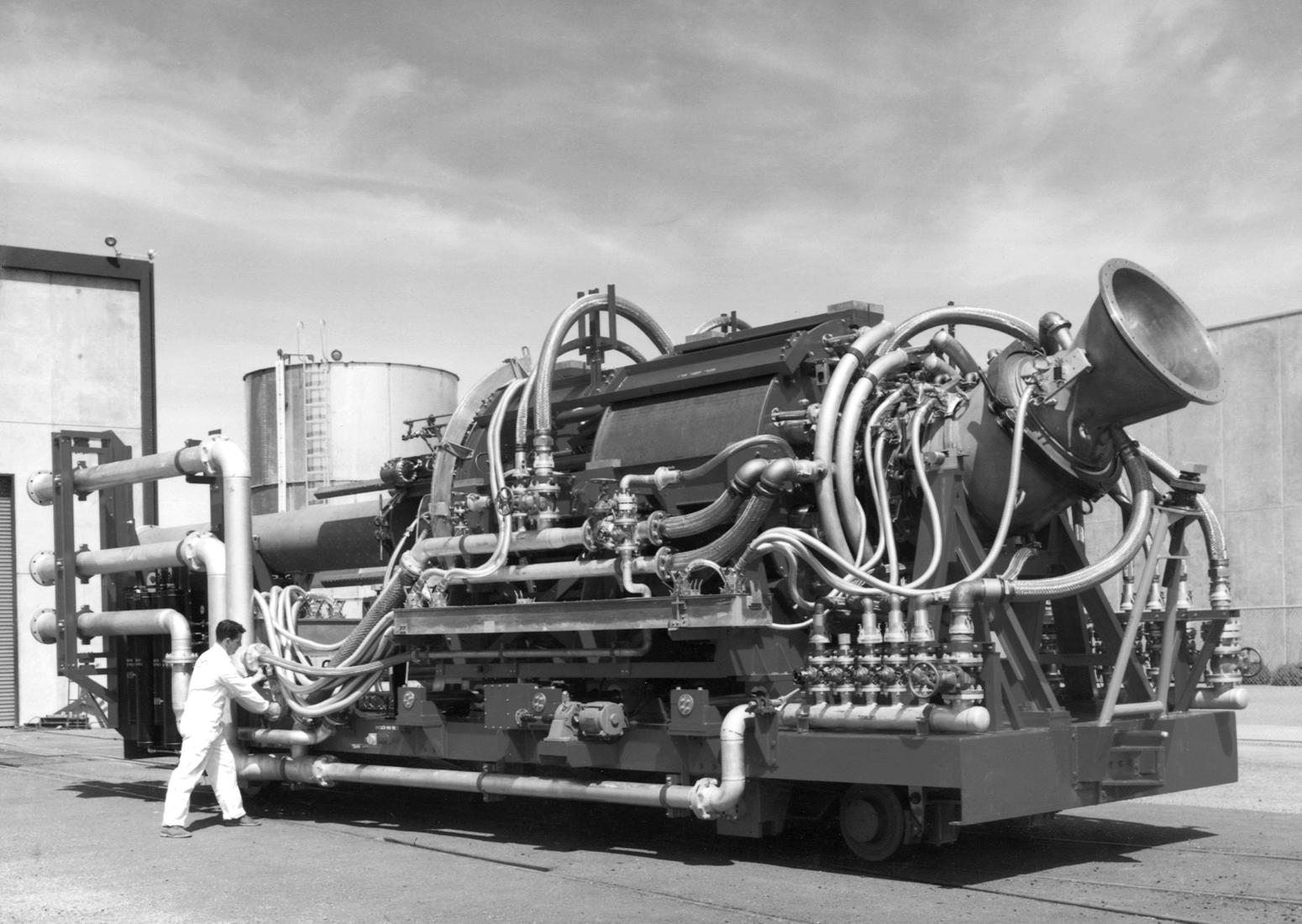 In the 1960s the United States Air Force (USAF) also seriously investigated building such a missile, although this one was planned to be ramjet-powered and sprint at Mach 3.

Skyfall has rekindled interest in such nuclear-powered missiles, but equally the USAF project is of interest as it was run deliberately to support decision-making about long-range nuclear strike weapons. It is an example of innovation in action and how success does not necessarily mean the innovation enters service. Many innovations fall short, but that does not mean they are failures.

In the 1950s the USAF had a keen interest in a manned nuclear-powered bomber, but the technology was developed, trialled, and evaluated as seriously inadequate. Moreover, there were inherent radiation hazards associated with nuclear energy. The heavy shielding required for human safety was inherently incompatible with the lightweight materials needed for aircraft structures. Furthermore, a serious accident with a nuclear-powered aircraft or missile could have left the crash site uninhabitable for many years.

Given this worry over manned systems, USAF interest shifted to considering the possibilities nuclear-powered missiles might offer. In 1957, studies suggested that a nuclear-ramjet powered missile could be built that could fly at low altitude at speeds of about Mach 3 and deliver a 3-4 tonne payload at intercontinental ranges.1

This Supersonic Low Altitude Missile (SLAM) was envisaged as being about 27m long and weighing around 27.5 tonnes (about 60,800lb). There were hopes that with development the missile could be fired from road-mobile launchers, enhancing system survivability.

Nuclear-ramjet propulsion systems were attractive primarily because of their very long range compared to conventionally powered ramjets of the same weight, including fuel.

However, the Project Director cautioned that:

“Contrary to popular belief, this range is not infinite. Several factors can limit the life of a reactor for ramjet applications to periods of time from a few hours to a few days depending on the methods of construction. The most obvious limit is actual [uranium] fuel consumption.”

To reach the ramjet’s operating speed, SLAM would be launched using a cluster of conventional rocket boosters. When at its cruising altitude of 35,000ft and distant from populated areas, the nuclear reactor would be turned on and go critical – preferably over enemy territory or the ocean.

Since nuclear power gave it extended range, the missile could cruise in circles over the sea until ordered by radio signal to descend and fly at 1000ft above ground level for a Mach 2.8-3.0 dash to the target areas. SLAM’s high speed at low altitude would have made the contemporary defensive systems ineffective, and so the missile could use its long-range to overfly and drop thermonuclear bombs on 16 widely separated targets.2

In that regard, it was as much an unmanned bomber as a missile.

The key was the engine: a ramjet that used nuclear fission to superheat incoming air instead of using hydrocarbon fuel. This heat came from a 600-megawatt air-cooled reactor, a squat cylinder 1.5m in diameter and 1.5 m long. Initially intended to have a ten-hour life, the reactor core would comprise tens of thousands of ceramic fuel elements incorporating a homogenous mixture of beryllium oxide and highly enriched uranium dioxide. Ceramics were required to withstand the design operating temperatures of up to 1,400°C3

As it was intended for unmanned use, the in-service reactor was planned not to include radiation shielding for the fission products of neutrons and gamma rays.4

Missile subsystems and in particular the avionics needed designing accordingly.

Tory II-A’s first operation was in mid-May 1961. The test-firing lasted 45 seconds at 40 megawatts (roughly 25 per cent of maximum power), equivalent to about 2,000 pounds of thrust.  Upgrading test facilities for full-power tests took several months, but in September and October, three tests in rapid succession at 150 megawatts made Tory II-A “a resounding success” albeit it was far too large for the intended purpose.5

Three years later, the follow-up flight-ready size and weight Tory II-C was installed and tested in the rig. Tory II-C’s full-power run in late May 1964 produced 513 megawatts and the equivalent of over 35,000 pounds of thrust.  Tory-IIC ran for as long as five minutes during test runs in 1964 and, in offering a realistic design, appeared close to being ready to fly6

Airframe design had not though kept up with the ramjet engine trials. The environment at Mach 3 at sea level was particularly harsh with skin temperatures of 500°C and sound pressure levels of around 162db. Some 1600 hours of wind tunnel testing had resulted in a canard configuration design with a scoop type inlet, but further detailed design was needed. Of interest, the forward sections of the missile were envisaged as being gold-plated to dissipate heat by radiation.7

However, if SLAM had been built, there was real uncertainty about how to test-fly a missile with a highly radioactive propulsion system safely.

SLAM did not use radiation shielding to lower overall missile weight and maximise performance. Accordingly, the reactor, when it went critical emitted intense radiation beyond the missile itself. However, it was considered that the missile would fly too fast to expose humans underneath to the prolonged radiation necessary to induce radiation sickness. Only a relatively low neutron population would reach the ground per kilometre, for a vehicle travelling at several hundred meters/ second.

There was an additional problem in that in-flight the nuclear ramjet would have emitted fusion products in its exhaust. In being widely distributed as the missile cruised, these products were considered likely to present only marginal dangers to humans. Even so, there were definite safety concerns, particularly when missile flight-testing over US territory was considered.

Moreover, the pressure wave from a low flying Mach 3 missile would have been significant, probably sufficient to damage light structures on the ground underneath. The surface noise levels of a passing Pluto were estimated at 150 decibels also potentially posing human hearing risks. To avoid these issues, one idea was to fly Pluto in a figure-of-eight pattern around the US Pacific territory of Wake Island, finally diving the missile with its highly radioactive reactor into an adjacent 20,000ft deep oceanic trench when testing concluded.

On July 1, 1964, after seven and a half years of work, Project Pluto was cancelled by the US Atomic Energy Commission and the USAF.8

Not by coincidence, numerous Minuteman I ICBMs in their hardened launch silos became operational across several northern-tier US States at about the same time.

It is quite possible that the Pluto concept could have been made to work. What killed it was not the technical or even operational challenges such weapons created. Pluto competed for funding with ICBMs and when these were proven able to be fitted with miniaturised thermonuclear warheads they were seen as better weapons for waging Armageddon.

ICBMs were reliable, almost unstoppable, flew intercontinental distances in half an hour and were relatively affordable. In using the technology of the time, Minuteman I missiles weighed about as much as Pluto was envisaged to; Pluto simply could not compete.

Other ‘seemed a good idea at the time’ innovations also fell by the wayside, including the B-58 bomber after a very short service life; the WS-110A chemical bomber (that would become the XB-70); the WS-125A nuclear-powered bomber; the subsonic Snark cruise missile; the Navaho Mach 3 cruise missile; the Dynasoar hypersonic skip-glide spacecraft, the Thor and Jupiter IRBMs and the Atlantis SLBMs.9

In terms of strategic innovation, Project Pluto was a successful project in that, while costly, it produced the technical information needed to allow prudent decisions to be made as to which kind of weapon system was best for end-of-the-world warfare.  Even if ultimately a technological dead-end, this innovative but rather scary project succeeded through being demonstrably a failure.

And what of today’s Burevestnik aka SSC-X-9 Skyfall missile? A good technical and operational analysis of the weapon can be found in the aptly named Nuclear Engine Air Power.

This book discusses contemporary nuclear-powered propulsion systems for both aircraft and missiles.

Dr Peter Layton is a Visiting Fellow at the Griffith Asia Institute, Griffith University. His PhD is in grand strategy, and he has taught on this at the US National Defense University.

He is the author of the book Grand Strategy.