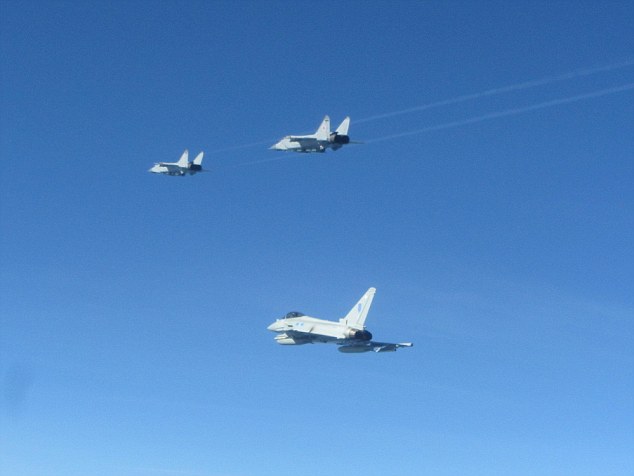 When I was a kid, I remember the images of deterrence which were provided by strip alert bombers against the Soviet threat.

Now we have images in the press of the strip alert Typhoons dealing with the air defence of the United Kingdom against a wider variety of threats than simply that of the Soviet Union, but which clearly includes the successor state, that of Russia.

When I visited RAF Coningsby, I learned that the base housed QRA South or Quick Reaction Alert South.

Question: The RAF has had to focus more on British airspace protection with both the terrorist threat and the upsurge in Russian airspace activity impacting on the UK.

What role has the Quick Reaction Alert force played in this process?

Answer: At RAF Coningsby, we are more focused on the terrorist threat whereas at RAF Lossiemouth we focus more on the Russian activities.

But the demand on resources is significant. Everything at each base, from equipment, to logistics to training is focused on maintaining the alert posture and ensuring we are ready 24/7.

The aircraft and pilots on QRA are only the tip of the pyramid of activity to ensure success in such an important mission.

When I visited RAF Lossiemouth in June 2016, I had a chance to visit the QRA based at Lossiemouth which is in addition to the one at RAF Coningsby

According to an RAF article published on September 19, 2014:

Royal Air Force aircraft at RAF Lossiemouth have launched the Quick Reaction Alert (QRA) for the first time since the Moray base took on the role of defending the UK’s Northern airspace. Typhoon jets were scrambled to identify aircraft in international airspace. The aircraft identified as Russian military ‘Bears’, did not enter UK airspace.

“This first successful launch for QRA North has been what all of the hard work by RAF Leuchars and RAF Lossiemouth personnel over recent months has been for.

“The relocation of two Typhoon squadrons was a significant challenge, one that was met by our whole team. The many months of preparation and infrastructure improvements have made us absolutely ready for this launch, and shows we are in the best position to provide the service to the United Kingdom that the Royal Air Force was primarily created for – that is, the protection of our airspace.”

Royal Air Force Lossiemouth began a new era in its history on the 1st of September when it assumed the provision of what the RAF calls the ‘Quick Reaction Alert (Interceptor) North’ task for the United Kingdom.

The role is carried out by crews from 6 Squadron. The pilot of the first launch said:

“It was an honour to be part of what is a milestone in the history of RAF Lossiemouth. With the move of Quick Reaction Alert from Leuchars to Lossiemouth, it has been a huge ask of many personnel. The fact that we had a flawless scramble and intercept of two Russian Bears was a testament to the hard work and commitment of all personnel involved.

“A very proud moment, not just for the pilots who did the intercept but the engineering crews who did a fantastic job, as well as many other station personnel involved in this constant commitment.”

During my visit, I was able to address the question of the nature of the pyramid necessary to launch QRA ready aircraft.

Visiting the QRA area demonstrated the 24/7 quality of the operation.

There was the red button to generate the movement of pilots and personnel to launch the aircraft very rapidly.

There are ops areas and offices, crew rooms, a dining area and kitchen to serve the staff, bedrooms for the rotational crew and a gym to remain ready.

This article was first published on November 13, 2016.