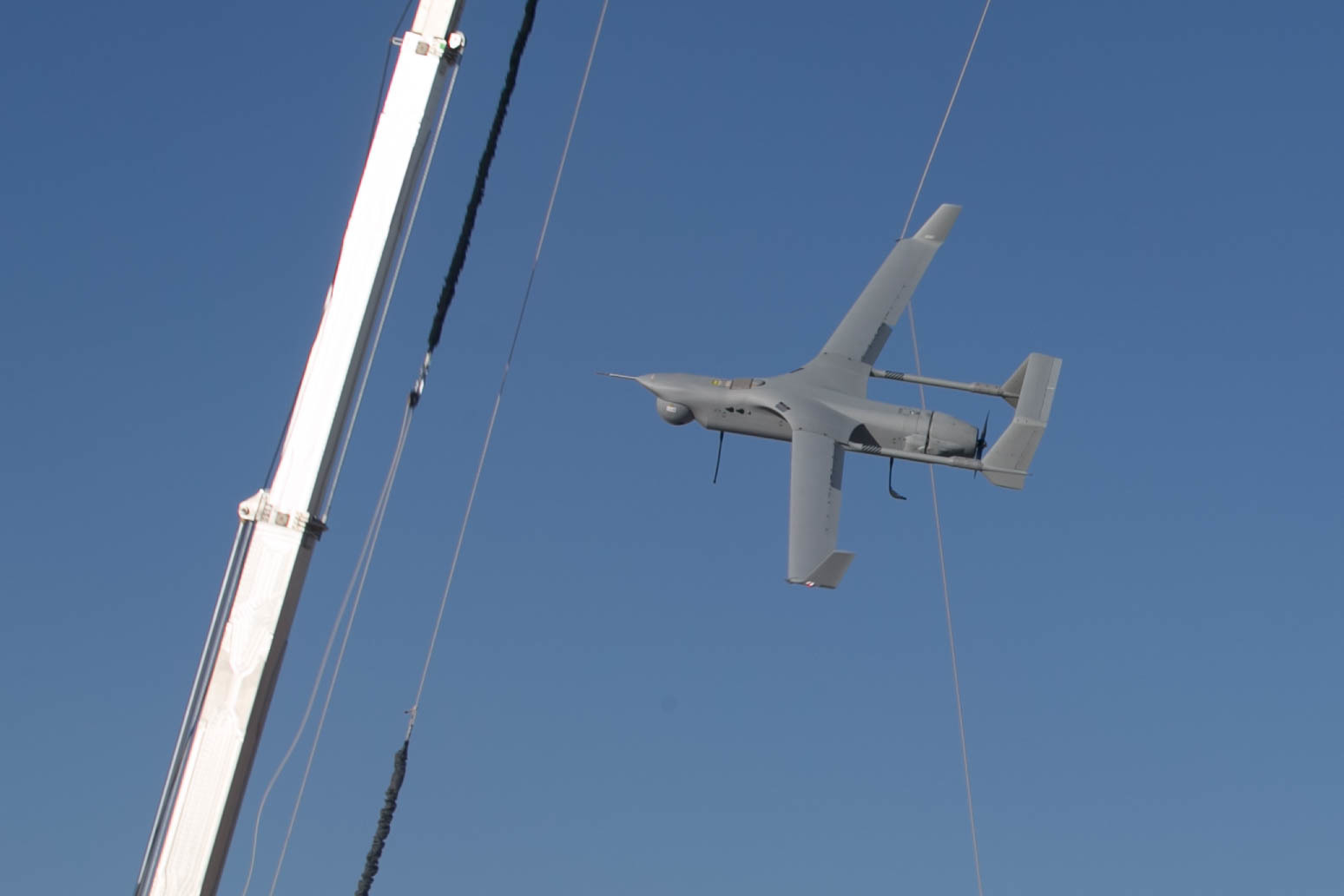 During a visit to 2nd Marine Air Wing in May 2015, we had a chance to return to VMU-2 and to continue the discussion of the USMC approach to the evolution of unmanned aerial systems within the expeditionary force.

In that interview, the importance of shaping a more flexible UAS for USMC operations was highlighted,

With regard to the RQ-21A, the squadron was working with industry to shape ways to enhance capability.

We are looking at size, weight, power tradeoffs to enhance overall platform capability.

Currently, we are at 135 pounds with the platform and we could go as high as 165 which would give us more payload to carry onboard.

Lt. Col. Faught emphasized throughout the discussion the need to evolve the payloads along with other key aviation capabilities being shaped for the MAGTF.  He especially felt that EW payloads will be increasingly of interest going forward.

And he felt as the F-35B joins the force along with the Ospreys, the opportunity to rework evolving UAVs to operate with these more expensive combat systems would be significant.

The members of the squadron provided a very clear perspective on the challenges and potential ways ahead.

It is clear that the use of UASs in Afghanistan was an important phase in the evolution of UAS use within the US forces.

But this really is a phase and one which needs to be put into its historical place with a clear need to move on.

UASs were used in a land operation with many years of infrastructure put into place, and this infrastructure – wide ranging, expensive and significant – is hardly going to be waiting for an expeditionary insertion force.

And the con-ops learned in Afghanistan clearly are a problem as well.

As one squadron member put it:

“The UAS controllers were more part of the intelligence system in Afghanistan than of the Marine Corps.

They were an asset which plugged into the intelligence gathering system, and did not operate as we do more generally with air assets in the USMC.

Normally, the airborne assets work with the ground element and share the intelligence picture in an operational context.

This was the norm in Afghanistan: an external asset managed by the intelligence system rather than organic integration with the MAGTF.

As the operations officer put it bluntly: “We are trying to burn down the whole UAV structure which the Marine Corps created in Afghanistan and shaping a new approach, one in which it is integrated within MAGTF operations.”

According to the Marines interviewed, the intelligence community views UAVs as “their assets” because that is how the system evolved in Afghanistan.

“UAV operations personnel would basically check in with the air officer who would then pass them over to intel and they would then work together.”

Rather than having UAVs as part of the fire support system, they became assets which were part of observation and evaluation and the authorization of fires was handled separately.

“This became a loop rather than a straight line which is where we would like it be when we operate as a MAGTF.”

The separation of Marine Corps UAV assets was the norm rather than the exception.

“When I would fly in Afghanistan, I might look down and see a Shadow or Scan Eagle below me, but I never once coordinated with these assts.

I had no idea what they were looking at.

I just knew that they were below me,” noted the Operations Officer.

Lt General David A. Deptula, who in his last active duty position oversaw the planning, policy, and development of Air Force UAVs, and grew that force by over 500 percent in the Air Force, agreed with the Marine officers interviewed about the need for integration.

“One of the biggest advantages of remotely piloted aircraft is that they allow for the condensation of the ‘find, fix, and finish’ kill chain onto one platform.

To capitalize on this capability these aircraft need to be integrated into the entire combat enterprise, not just one piece of it.”

That is exactly what the next phase of UAVs involve in the Marine Corps—the integration of these systems within the Air Combat Element (ACE) of the MAGTF.

“The GCE should be requesting the capability, not the asset.

If you need persistent IS with full motion video, that will probably fall to UAS.”

The UAS operator is a key part of the equation and when it works properly, the operator can work with the GCE and work with the sensor onto the target by shared situational awareness.

The challenge is shaping ways to parse the information to the appropriate element within the MAGTF to empower the GCE or ACE to become more effective.

A problem facing the USMC is the relatively limited capabilities of the UASs which they currently operate whether the Shadow or the RQ-21A.

Their range is limited, and their footprint is not agile.

The Marines are bringing the RQ-21A aboard amphibious ships but its limited range – 50 nautical miles – and its footprint limit its utility.

And it takes up precious ship space as well.

“4 Shadows take about 50-55 Marines to operate with only one airborne at any one time.

With the RQ-21A we will take 22 marines with us onto the ship with the MEU but with our equipment size, we are already taking up about 12-15% of the space on the ship.”

These limitations also can frustrate the training and career processes.

Marines are trained at Air Force UAV schools and the Air Force personnel go on to operate Predators, and the Marines operate a much more limited asset.

Another clear requirement is to build swappable packages for the evolving USMC UAS birds as well, for missions can highlight C2, ISR or EW needs.

And the sweet spot for the USMC would be to have UASs, which could work with Ospreys and F-35s to provide persistent capability complementing the insertion force.

The RQ-21A has too small of payload to be able to provide for this kind of operational flexibility being limited to the 20 pound or less category.

But there is a clear need, one driven by USMC innovation overall.

“When we looked at an after action report for a SP-MAGTF mission, there was a desire to have communications reachback, the ability to have armed escort and persistence surveillance, all capabilities which the proper UAS can provide.

Why would put in anything else but a UAS to provide for those capabilities?”

And a core challenge facing UASs clearly is not just bandwidth but jamming.

“Our current platforms actually operate at bandwidths that are commercially available. Our Shadow operates at the same bandwidth as your WiFi does.”

Beyond the question of evolving a new generation of UASs more appropriate for the USMC expeditionary approach and Osprey and F-35 enabled and capable of collaborative engagement, there is an opportunity in the short term.

The USAF has Predators going to the Air National Guard and as Afghanistan winds down Predators could be made available to the Marines.

For the Africa and Middle East missions, Marine Corps Predators could be operated on French bases in West Africa and Djibouti in East Africa (where the Italians recently operated Predators for several months) with the ground stations able to support USN-USMC ARG-MEUs operating on either side of Africa.

The Marines did not suggest this option, but they did focus on how longer-range land based assets could support an expeditionary force.

“The Reaper is the best thing out there, whether you look at speed, range or endurance.

And you can have the ground control station anywhere you want within the broad operational area.”

WTI is a seven week training event hosted by Marine Aviation and Weapons Tactics Squadron One (MAWTS-1) cadre which emphasizes operational integration of the six functions of Marine Corps Aviation in support of a Marine Air Ground Task Force.