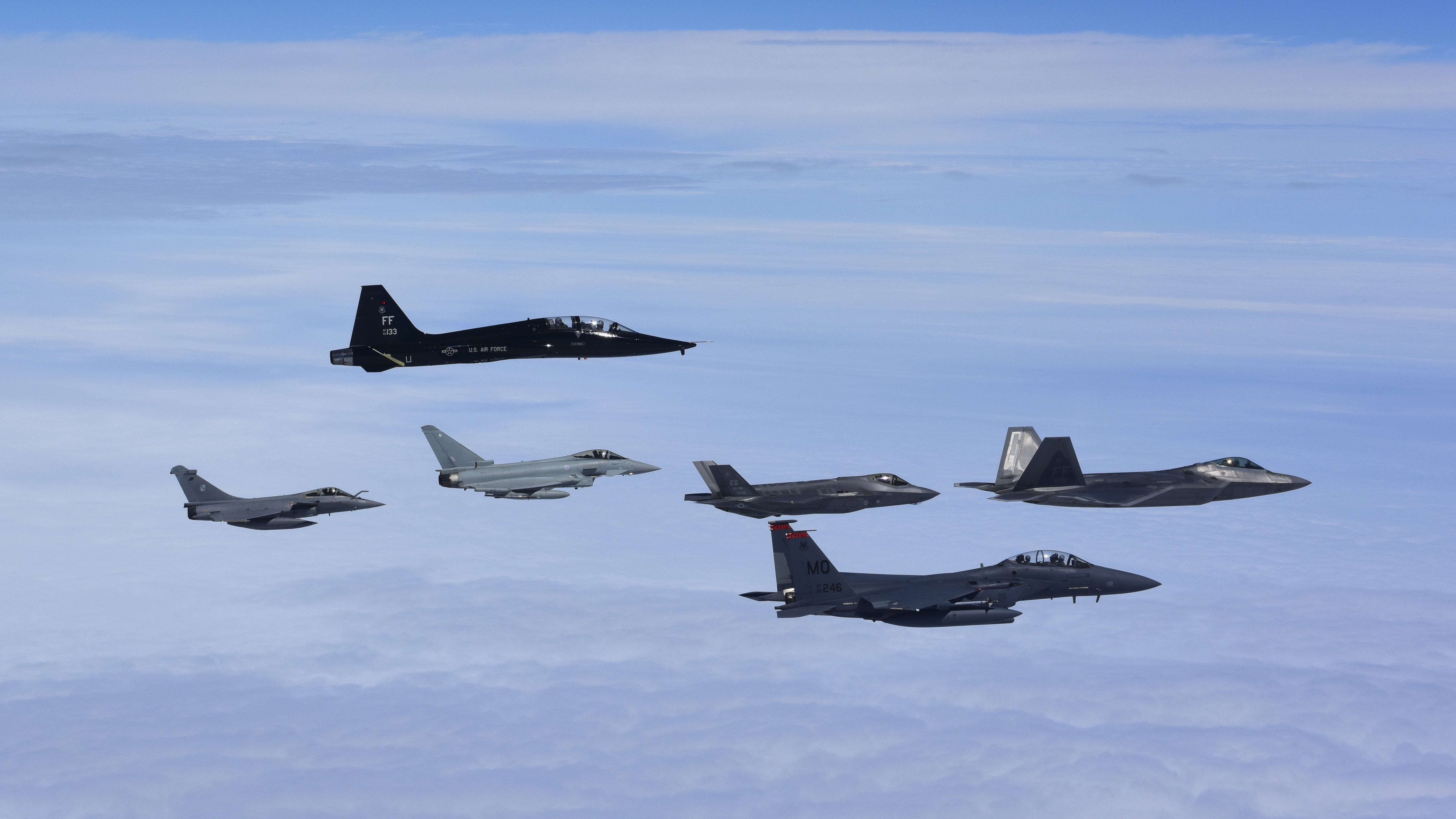 In a story first published on February 29, 2019, Pierre Tran provide an overview on the proposed F-4 Rafale upgrade program.

That budget was agreed after close negotiations between government and industry, a source close to the talks said.

“This is a guarantee of our sovereignty,” Parly said on a visit to the Dassault Aviation factory at Mérignac, next to Bordeaux, southwest France.

“This is a chance for our capabilities,” she added.

“It is also a necessary investment to ensure the Rafale’s competitiveness for exports in the coming decades and to safeguard the industrial sector for the fighter jet.”

Parly said she was proud to be the lead advocate for the Rafale in any prospective foreign deal, adding that the upgrade offered further argument in favor of the French fighter.

Dassault, MBDA, Safran and Thales are the four big companies working on the Rafale.

The main modernization features include a connectivity of data links with French and allied forces, greater detection and identification of threats, and fitting upgraded missiles.

A modernization to F4 was in response to the French Air Force’s “evolution of probable threat,” said Etienne Daum, manager for aeronautics, defense and security at think-tank CEIS, based here.

The F4 is important as a a step toward to the Future Combat Air System.

The F-4 upgrade is the first technology package which allows the French fighter to fly in a data network until the planned Next-Generation Fighter flies some time after 2035.

That fighter will be a key element in the FCAS, a European project for a system of systems, which will include a mix of piloted jets, unmanned armed drones and smart weapons.

A Rafale upgrade could be seen as a victory of pragmatism over a cultural stereotype of the French character which is said to favor philosophy.

The upgrades are due to be installed in two phases, with a first batch in 2023, followed by a second in 2025, the Armed Forces ministry said in a statement.

That incremental approach is intended to fit the features as soon as they are available, part of a new defense policy.

“The F4 standard is part of the ongoing process to continuously improve the Rafale in line with technological progress and operating experience feedback,” Dassault said in a statement.

Dassault will be industrial architect, the company said.

“We will be responsible for implementing innovative connectivity solutions to optimize the effectiveness of our aircraft in networked combat (new satellite and intra-patrol links, communication server, software defined radio).”

There will be also be upgrades to the active electronically scanned array radar, front sector opto-electronic targeting system, and helmet-mounted display, the company said.

There will a new service contract and a prognosis and diagnostic aid system intended to deliver a predictive capability.

Maintenance will draw on the use of Big Data and artificial intelligence.

A new control unit for the M88 engine will be fitted.

The Spectra electronic warfare system and Talios targeting pod will be boosted, the ministry said.

The Direction Générale de l’Armement (DGA), Joint Chiefs of staff and the service wing — Direction de la maintenance aéronautique (DMAé) – worked together to draw up the F4 requirement, seen as essential to maintain French capability with the introduction in Europe of the F-35 joint strike fighter.

France signed a development contract  with MBDA for the Mica NG, the company said Nov. 11, 2018.

The weapons is intended to have greater range and sensitivity in sensors,with lower service cost.

Pierre Tran then added a look at the evolutionary approach the FAF is taking towards FCAS in a story published on February 25, 2019.

Negotiations are being held with electronics company Thales and European missile maker MBDA on joining Airbus and Dassault in a joint concept study for the Future Combat Air System, said a source who declined to be identified.

The industrial partners aim to decide who does what, for how much, and with whom, said the source, adding, “We are not far from an agreement.”

Airbus and Dassault Aviation, which signed a contract Jan. 31, 2019 with the French and German governments, have agreed on their respective roles in the two-year joint concept study.

Parly also announced a €115 million contract for a feasibility study, dubbed Turenne 2, in which Safran will develop new turbine blades for the M88 engine, which powers the Rafale fighter jet.

The new blades are expected to boost the M88’s thrust to nine tons compared to the present 7.5 tons.

Safran and its German partner MTU signed, during the ministerial visit, a cooperation agreement to build engines for a Next Generation Fighter, with Paris and Berlin expected to sign this year a contract for an engine demonstrator for the future fighter.

The joint concept study seeks to define architecture and concepts of the Next Generation Fighter, a pack of “remote carriers,” and missiles. These elements are due to be hooked up in the Future Combat Air System, a system of systems.

A demonstrator for the new fighter is expected in 2025/26, with the aircraft due to enter service in 2040, the source said.

French, German and Spanish officers gathered Feb. 20 at the offices of Dassault at St Cloud, just outside the capital, in the “kick-off”  meeting for the study.

Spain signed a letter of intent Feb. 15 to join France and Germany, and that is expected to be firmed up to a memorandum of understanding. The Spanish Airbus unit is likely to be the industrial partner.

The partner nations expect to announce at the Paris air show contracts for studies for a demonstrator for the planned fighter, and research and technology for an engine and remote carriers.

Other studies may also be unveiled.

Dassault will take the lead role in the new fighter, which will replace the Rafale and Eurofighter Typhoon.

The new fighter is expected to be in the 30-ton class and be between 15-20 meters long.

The French version will be able to land on aircraft carriers.

For French planners, there are four classes of remote carriers, comprising a large drone weighing several tonnes, a cruise missile, a Smart Glider and a variety of smaller remote systems. That compares with the US, which has drawn up a framework encompassing some 15 different remote carriers.

A remote carrier is an unmanned system which would fly in a first wave of attack and seek to destroy, confuse or disable enemy systems, allowing manned aircraft to fly in.

MBDA unveiled at the previous Paris air show in 2017 its Smart Glider concept, a family of low-cost, unpropelled weapons deployed in “packs” while interconnected with manned aircraft.

The new fighter will be capable of air-to-air, air-to-ground missions and carry a nuclear weapon for the French forces.

Currently, for the Germans, the Tornado can carry the B61 nuclear bomb, with the German government considering the Tornado replacement.

“We, as Dassault Aviation, will mobilize our competencies as system architect and integrator, to meet the requirements of the nations and to keep our continent as a world-class leader in the crucial field of air combat systems,” Dassault executive chairman Eric Trappier said Feb. 6.

Dirk Hoke, chief executive of Airbus Defence and Space, said, “Both companies are committed to providing the best solutions to our nations with regard to the New Generation Fighter as well as the systems of systems accompanying it.”

And the at the Paris air show to be held from June 17-23 is where the companies promised to showcase demonstrators.

Editor’s Note: The question of using remotes as the initial entry platform will require low observability, engines which can support low observability, secure data links which can operate in a severely contested environment, and an ability to be appropriately weaponized, and in the case of having non-lethal means of destruction, effective small power plants.

And of course, the remotes will need to operate in a GPS jammed environment as well.