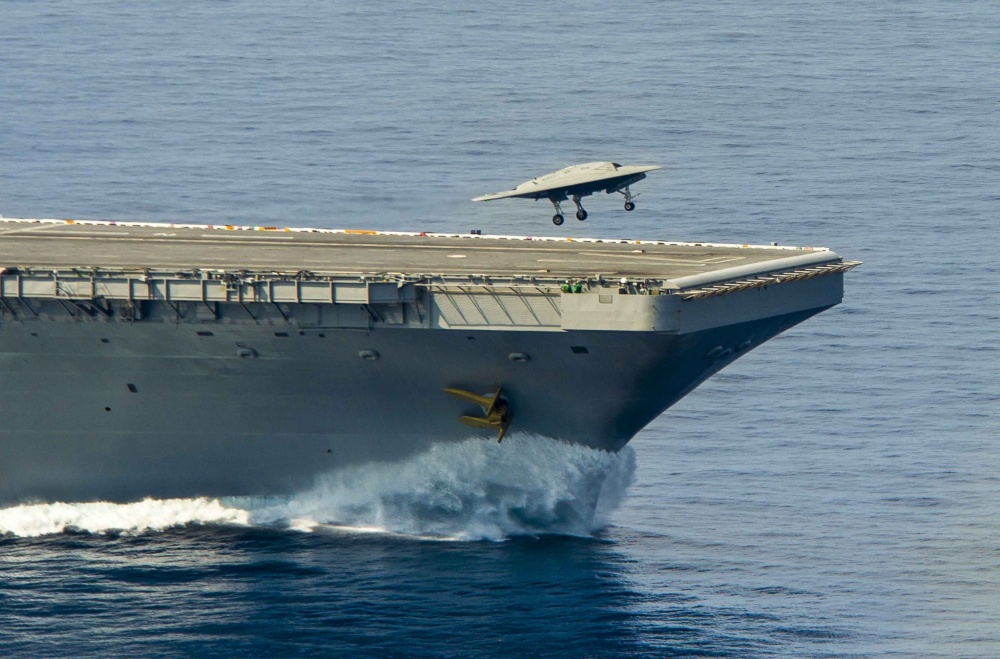 Boeing’s ‘loyal wingman’ unmanned combat aerial vehicle (UCAV) is a fine example of Australian industry and defence cooperation, and its promoted ability to project power and keep manned platforms out of harm’s way is seductive. However, there’s a curious absence of advertised thought on wingman as the impetus for assessing a requirement for Australian UCAVs as sea-based weapon and sensor platforms.

Australian maritime capability is increasingly significant, with the commissioning of the landing helicopter docks Canberra and Adelaide and the Hobart-class destroyers, and the Hunter-class frigate project due to cut steel in 2020. The MH-60R helicopter is mostly mature in the Australian context. The RAAF is rapidly consolidating operational capability of its P-8A Poseidon maritime patrol aircraft, and the MQ-4C Triton and MQ-9 Reaper drones are coming. But what of air support for maritime forces? There’s a clear gap which a UCAV could fill.

Generally UCAVs, as opposed to unmanned aerial vehicles (UAVs), carry weapons and are approaching the performance of manned fifth-generation fighters. The US Navy is paving the way with the development of the MQ-25A Stingray unmanned aerial refuelling platform, which demonstrates a clear intent to field sea-based autonomous air combat capabilities, and through the pending release of its analysis of alternatives for replacing the F/A-18E/F Super Hornets and EA-18G Growlers, which will include unmanned options. The F-35 is likely to be the last manned fighter operated at sea by the US.

A UCAV could provide combat capabilities traditionally ascribed to manned fixed-wing aircraft. It can be designed to overcome the limitations of its host vessel such as deck ratings and launch and recovery methods, or the cost barriers of other sea-based options such as the F-35B.

With a UCAV, a maritime force would be capable of a greater breadth of missions such as protecting dislocated force elements, conducting offensive strike operations or providing its own comprehensive air defence—all preconditions for successful maritime power projection.

Loyal wingman sets the conceptual example for what could be achieved with a sea-based UCAV. As advertised, it’s designed to protect assets such as F-35s or E-7 Wedgetails and for power projection in a highly networked environment, with a level of autonomy not yet realised by existing platforms. Translating the wingman capability to a fight in the maritime environment reflects a more realistic view of future operations likely to be conducted far from our coastline.

The purchase of the Hobart–class destroyers and the significant increase in tonnage of the Hunter-class frigates compared with their predecessors demonstrate an acceptance of this strategic reality, and a seeming preparedness to deploy maritime assets in higher-risk areas. These surface warships and our submarines may be pre-positioned in the battlespace and are likely to be our first active combatants. The combination of Aegis combat system-equipped ships and UCAVs would give the ADF comprehensive power projection at the start line.

We acknowledge the probable engineering constraints preventing naval deployment of a wingman. If such an aircraft is designed for operations in the maritime environment, those issues can be overcome and the unnecessary challenges of earlier air projects whose use at sea exposed their critical lack of adaptation for maritime operations can be avoided.

Both the US and China field UCAVs at sea at varying levels of capability, and more development is underway. Through the MQ-25A Stingray project, its earlier involvement in the UCLASS program and now the loyal wingman, Boeing in particular, but not exclusively, has a bank of knowledge to support the Australian development of such an aircraft.

The RAN has experience in operating UAVs such as the ScanEagle—and from vessels like the Armidale-class patrol boat that aren’t usually associated with operating aircraft. The more recent purchase of the Schiebel S-100 Camcopter shows a commitment to unmanned assets which bodes well for the design and development of a UCAV. The general history of naval aviation shows that a range of methods have been used to launch aircraft from a variety of ships.

While some historical launching methods were decidedly ‘one way’, a derivative of wingman might be launched by an offshore patrol vessel, supply ship, frigate or destroyer and recovered by an LHD. That would add complexity to adversarial targeting; increase UCAV numbers, distribution and redundancies; and improve the outcomes of operational modelling based on Lanchester’s square law. Taking advantage of a networked environment and leveraging a capacity for autonomous operation, tactical control of the UCAV at sea could be provided by RAN flight controllers.

To fully appreciate the value of a sea-borne UCAV, we need only consider the payload of the navy’s Camcopter. Its 50-kilogram payload won’t buy much combat capability, but it can still provide significant information-warfare materiel, such as electronic support, electronic attack or GPS signal disruption, or inventive deployment of infantry ordnance. Loyal wingman’s advertised capabilities build on this significantly, and the multi-mission support concept marries with the flexibility of naval platforms and operations.

Combinations of sensors could enable a UCAV to act as an intelligence, surveillance and reconnaissance platform, extending a fleet’s access to imagery and enhancing its understanding of the electromagnetic spectrum. The inclusion of offensive jamming and deceptive payloads would provide a step change from the navy’s current capabilities. Payloads could be developed to provide an early warning radar capability and augment existing assets or potentially provide command-and-control nodes or relays for communications networks.

A force’s offensive capability would be strengthened through development of a weaponised UCAV. Armed UCAVs could provide counter-air protection for a fleet or for smaller, detached mission elements such as rapid environmental assessment, mine warfare and mine clearance teams, or special forces.

Given that wingman’s endurance is projected to be significantly greater than that of current platforms, it represents an enormous increase in capability. An armed UCAV could attack targets in an anti-submarine or anti-surface mission and provide a more flexible and deliberate land-strike capability than the ADF’s current options.

A fast and manoeuvrable UCAV would be able to evade or deal with direct threats, increasing its survivability. Traditionally, due to smaller support infrastructure and limited replenishment opportunities compared with land-based aircraft, sea-borne air assets have generally been assigned to missions with lower risk levels. This restriction would be eased significantly with a UCAV that’s an organic part of a maritime force, enhancing tactical and operational flexibility.

Fielding a UCAV as a sea-based weapon and sensor platform makes sense. The ADF is unlikely to have ready access to forward bases for its current aircraft to conduct persistent operations in the initial phases of a future conflict. As the ADF prepares for that future fight, its growing confidence and experience in UAV and LHD operations show that sea-based UCAVs are a logical evolution of those capabilities and present an excellent opportunity to start filling a gap in maritime airpower.

Image courtesy of the US Department of Defense.