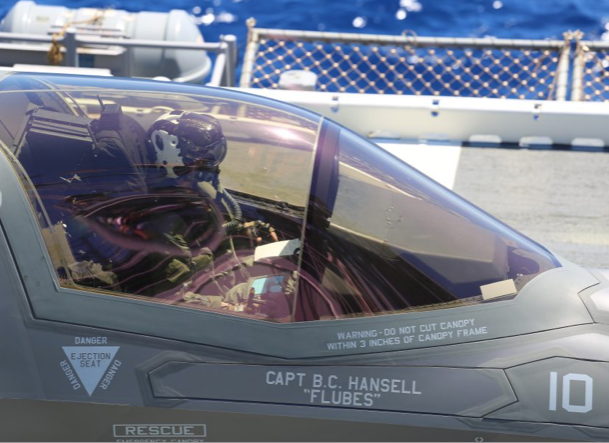 A week after our visit to the Warlords, we had a chance to fly to the USS WASP and discuss with Marines and the RAF/Royal Navy team, their experience onboard the ship.

The Warlords were key players in the effort, but Marines from throughout the aviation enterprise were engaged.

In an article first published on May 29, 2015, the results seen onboard the USS WASP were discussed.

The continuous sorties of F-35Bs aboard on the USS Wasp on May 26, 2015 witnessed by visitors from the foreign and the U.S. press was almost numbing.

There are six planes aboard the ship, 4 from the Green Knights squadron at Yuma and 2 from the Warlords at Beaufort. We saw several sorties of F-35Bs aboard the ship conducted by pilots from both squadrons.

Although the planes was a clear focus of attention, the role of many key organizations culminated in what we saw that day.

As Lt. General Davis, Deputy Commandant of Aviation for the USMC, stated in response to a question about the date for the initial operating capability of the aircraft:

It will be this summer.

We are clearly focused on July.

But it is in the hands of the professionals and they are making it happen.

The professionals he had in mind were both aboard the ship and linked to their home bases or organizations.

We saw aboard the ship maintainers from three squadrons, the Green Knights (Yuma), the Warlords (Beaufort) and VMX-22 (New River), the squadron that prepared the Osprey for its IOC in 2007 and is continuing its work with F-35B integration.

In addition to the USMC squadrons, the USN has worked hard on modifying the ship to operate the new USMC aviation assets.

The XO of the ship, Captain Andrew “Mongo” Smith, highlighted that the ability of a 25 year old ship to become part of “fifth generation warfare” and its ability to operate the F-35 showed the flexibility of the ship and the USN-USMC team.

And as one of the USMC pilots involved with the ship integration-testing put with regard to what the plane brought to the ship:

No one in the world has ever sent an airplane off of an amphibious ship with this level of situational awareness and fusion between aircraft to aircraft and aircraft to ship.

The fusion of the data aboard the airplanes and your ability to see what other planes are seeing a number of miles away from you as well as what the ship is seeing and then to be able to communicate with them without using the radio is a tactical and strategic advantage that can not really be over stated.

Together, the USN-USMC team is transforming a Gator Navy, which historically has operated amphibious ships for assault by helos, amphibious vehicles, and infantry to one capable of amphibious assault at great distance.

It is turning what was a Greyhound Bus role to shaping an entirely new strike capability appropriate for 21st century operations.

It began with the introduction of the Osprey and is being empowered by the integration of the F-35B with the Marine Corps force.

The nature of this change has already been presaged in a Marine Corps exercise involving San Clemente Island, which was conducted in the first part of 2014.

For the Marines, airpower is part of the Marine Air-Ground Task Force (MAGTF), or put in simple terms, a key force allowing force insertion – built around the ground combat element – to occur in a diversity of settings and situations.

The Marines, operating from the training base in Twentynine Palms and landing on San Clemente Island off of California, approximately 100 students from the Infantry Officer Course in Quantico flew aboard Ospreys the simulated test area to eliminate cruise missile threats and take back an airfield from enemy forces.

The Infantry Officer Course at Quantico paired with VMX-22 conducted the exercise and the Ospreys were accompanied by specially configured Ospreys with an airborne communication gateway with a Wi-Fi network that linked the tables carried by the squads riding in the Ospreys.

The information shared was maps and images as well as text messaging among the ground force element aboard the Ospreys.

In effect, the F-35s went in and provided the capability to eliminate the ground missile threats and allowed a distributed company to be inserted to do their job.

In other words, the Osprey carried the force; the F-35 surrogate providing the cover which could insert the force more effectively.

This is how the Marines are looking at a key aspect of the F-35 approach to providing close air support for a 21st century ground insertion force.

Thus, it was not surprising to find VMX-22 aboard the USS Wasp for the operational tests.

The CO of VMX-22, Col. “Horse” Rauenhorst highlighted that their work as a squadron was focusing on the integration of the Osprey, the F-35 and the new CH53K as key elements enabling a more lethal and survivable MAGTF.

The infantry Marines will be inserted at greater distance, with greater flexibility to enhance their effectiveness and survivability.

That is the whole point of the innovation being tested aboard the USS WASP.

A very evident aspect of the effort for ship integration of the F-35B aboard the ship was maintenance at sea for the F-35B.

Maintainers from the three squadrons – the Green Knights from Yuma, the Warlords from Beaufort, and those from VMX-22 – came together for the first time to work the maintenance effort aboard the ship. And according to the maintainers their approach worked very well.

But this would not have happened if the USMC had not established what they call organic maintenance of the aircraft, meaning that the Marines did their own maintenance, and shaped their own way ahead.

Often forgotten is that the new generation of maintainers is creating the policies and procedures whereby those who follow will learn how to maintain the plane.

Or put simply, standing up the plane at sea is a first, and the maintainers see their role as pioneers in process of innovation for 21st century capabilities.

And the report from the team aboard the ship was straightforward: “we could maintain the plane on ship very well and saw no loss of capability compared to maintaining the plane ashore.”

The Brits were aboard the ship as well and are training with the Marines at Beaufort, South Carolina, the base where all foreign F-35B pilots will be trained and of course maintainers as well.

The Italians will be coming next, and both the Italian Navy and Air Force will operate F-35Bs. In an interview with the Italian Chief of Staff of the Air Force, Lt. General Preziosa put it with regard to the B:

“We studied the issue carefully (of the decision for the IAF to buy F-35Bs) and for the kind of missions we face we needed the flexibility which the B can add to the fleet.

We need to go to the mission — not the airfield. We will operate in many areas where there are only short runways; the B allows us to operate in those conditions.

I have now had a chance to visit all three new large deck ships where the F-35 will play a key role: the HMS Queen Elizabeth on March 31, 2015 in Scotland earlier aboard the USS America, and the CVN-78 (Gerald Ford).

The British carrier is an F-35B enabled strike carrier and the engagement of the UK Royal Navy and Royal Air Force with the USMC and the USN is very significant, and personnel onboard clearly were looking for lessons learned aboard the ship to integrate with the standing up of the new class of the UK’s very innovative carriers which the United Kingdom is building.

During a panel discussion with team members aboard the ship with reporters, there were two members of the Royal Navy who participated. Lt. Cdr. Neil Mathieson and Lt. Cdr. Beth Kitchen, represented different roles within the process. Mathieson was visiting the ship and returning to the UK with lessons learned; Kitchen was based at Beaufort and is an integral part of the USMC team, notably with regard to rolling out the maintenance process and effort.

Lt. Cdr. Kitchen put it nicely in resonating with the theme which Lt. General Davis was later to tell reporters: “it is in the hands of the professionals.” Kitchen underscored:

The F-35 can be surrounded by myth and legend.

But it is a real testimony to the capabilities of the maintainers of the Royal Navy, the Royal Air Force and the USMC to adapt to the new technological challenges.

Their knowledge of aircraft systems is now being applied to a new air system and taking steps forward into the unknown.

It is a testament to the professionalism of these maintainers that they are just getting on with the job of making this aircraft work.

Every single person involved in this detachment are passionate about this aircraft and not just because it is a sexy looking aircraft but want to see it working in every operational environment.

A version of this piece originally appeared on Breaking Defense: