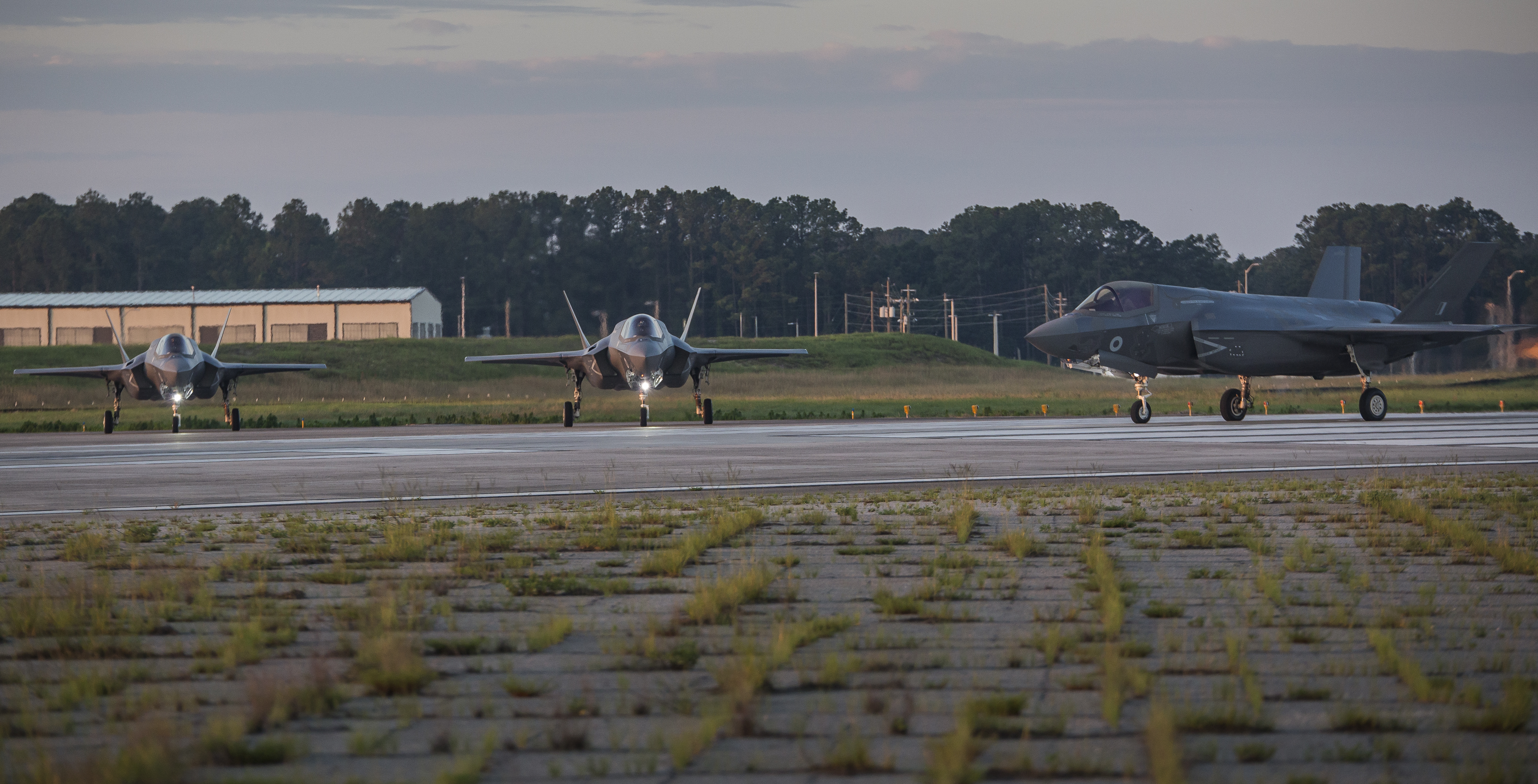 During our visit to MCAS Beaufort, we had a chance to discuss UK engagement and participation in VFMAT-501.

This article was first published on June 10, 2015 and that article follows:

During a visit to the 31st Marine Air Group, we visited VFMAT-501, the Warlords and met with the CO of the Squadron “OD” Bachman, Major Brian Bann and Squadron Leader Hugh Nichols from the Royal Air Force.

The visit to the training squadron as well as to the USS WASP the following week drove home a core point – the Brits and Marines are working closely together to stand up their separate but coordinated capabilities associated with an F-35 enabled 21st century combat force.

The F-35 global enterprise is a key enabler of the use of collaborative resources.

The Brits are training at Beaufort on F-35 equipment at the base – including the simulators – as their own facilities are stood up in the UK and the squadron grows before returning to the UK to get ready to work with the HMS Queen Elizabeth.

The Brits are integrated members of the squadron and the Marine Corps and British maintainers are learning together how to adapt their specific maintenance protocols – which are different – to a common airplane.

Obviously, this will play real dividends down the road in terms of being able to cross deploy at sea.

And the Brits recognized that a software upgradeable airplane requires continuous upgrade in order to stay at the leading edge.

They are keeping a permanent detachment at Edwards AFB to remain engaged in the lifetime modernization envisaged for the F-35 global fleet.

Question: What is your function here at the squadron?

Sqn Ldr Hugh Nichols: I have two roles.  I am an instructor pilot within the Warlords and in that role, I am an integrated member of the team.

My other role is as the Senior National Representative for the UK on the base here.

Question: At Luke the Aussies and USAF pilots are flying each other’s planes.

Is that happening here?

Sqn Ldr Hugh Nichols: It is.  In effect, we have a pooling agreement here.

Our aircraft are pooled with those of the Marines, and we fly aircraft in the pool not just the UK jet.

Question: When you return to the UK with the planes, obviously a wider F-35 community is being established with which you will operate.

How do you see that?

Sqn Ldr Hugh Nichols: The majority of the operating areas big enough to fully utilize this aircraft will be out over the North Sea, so I can see us using this to our advantage by operating with our Northern European allies.

I would anticipate that there will be a lot of cooperation with Norwegians, Danes or the Dutch as we bring this exciting aircraft into service on European soil.

Question: And because the B and the A have common combat systems, your collaboration will not depend on which airframe you fly?

At the end of the day, it doesn’t matter if you in an A, a B or C, once airborne, the mission systems are the same.

Question: What is the advantage of being here working with the Marines?

Sqn Ldr Hugh Nichols: There are many, but let us start with their sense of urgency in getting the aircraft to Initial Operating Capability.

The Marines have done a fantastic job working through previous program difficulties and have blazed a trail towards bringing this next generation capability into service..

They are Marines, and if anything gets in the way, they deal with it.

Working with them will clearly ensure that we are ready for the Queen Elizabeth.

And the pooling agreement is important in terms of cross learning.

Our young maintainers are working with Marine Corps maintainers and they are learning to work through different procedures and protocols to learn how to maintain a common airplane.

Question: Obviously, this will yield operational advantages later as Marines fly onto your ships and vice versa.

How do you see this?

Sqn Ldr Hugh Nichols: Obviously, deciding to do that is above my pay grade, but clearly you are right, we have cross-decked in the past and shaping commonalities from the outset will help us to so in the future.

The Marines could fly jets off of the Queen Elizabeth and we off the Wasp or other ships the USMC enable for F-35B use in the future.

Question: The RAF is in the throes of a modernization effort and necking down to a smaller type model series of aircraft across the board.

How are you working the Typhoon-F-35 integration?

Sqn Ldr Hugh Nichols: We have already started Typhoon-F-35 integration at Edwards, with the Test and Evaluation Sqns, and it shouldn’t’ be too long before we are involved in training exercises on the East Coast.

Question: Secretary Wynne made the point that modernization of legacy aircraft should be taken going forward from the perspective of working with the F-35.

How do you view that approach?

Each aircraft brings different strengths to the fight and we will fly them both, with the tactics will evolving over time.

Software modifications will undoubtedly be required in order to get the most out of each aircraft and ensure full interoperability; take Link 16 for example, where the F-35 could put out a huge amount of information.

We need to ensure that Typhoon is able to receive and display the information without overloading the pilot. 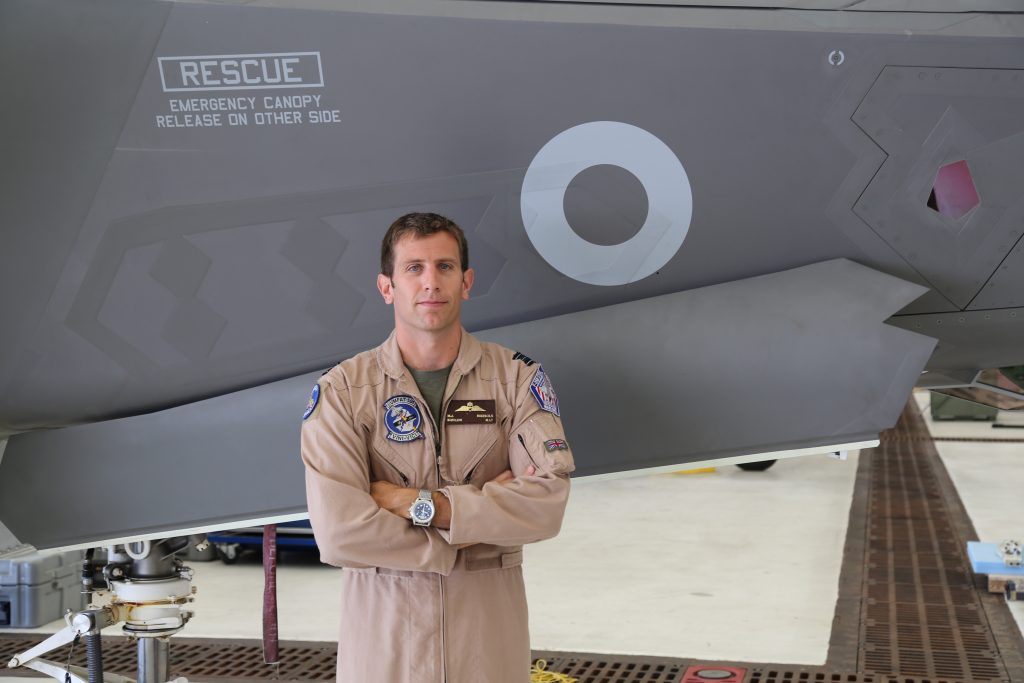 Question: Typhoons have flown for some time with F-22s and now with F-35s.

What is the impact on the Typhoon?

Today, every legacy aircraft that can fly with a Raptor clearly wishes to do so.

But there is going to come a point where they will prefer to fly with the F-35 due to the  data linking capability of the F-35 and how that capability enhances the situational awareness of all aircraft in that fight.

For example, we can push information out to the legacy fleet so they know where the threats from integrated air defense platforms are and therefore they have a better understanding of where they are safe from those systems.

Question: What is the way ahead for the British presence at Beaufort?

17(R) Squadron will remain at Edwards.

It is tasked to be involved in the ongoing operational tests as new software and new capabilities come online for the F-35 throughout its service life.

And in a story by Cpl. Benjamin McDonald, published on June 7, 2018, the transition from Beaufort to RAF Marham was described:

The transition of their F-35Bs signifies the shift from current to next generation air combat power for the Dambusters.
Royal Air Force and Royal Navy personnel were incorporated in Marine Fighter Attack Training Squadron 501 even before the F-35s arrived to MCAS Beaufort in July of 2014. The beginning of the UK’s departure is another major landmark for VMFAT-501, 617 Squadron, and the F-35 program.

“Today’s flight represents a tremendous milestone in the strategic partnership between the USMC, Royal Navy, and Royal Air Force in the context of the 617 squadron’s preparation towards F-35B full transition in the latter half of 2018. From the tactical perspective, the launch of four aircraft on a June morning could simply be viewed as normal operations here at MCAS Beaufort. What makes this day unique is it reflects the culmination of six years of detailed integration between the Marines and Sailors of VMFAT-501 and our UK partners that began in 2012 with the arrival of the first UK maintenance personnel, pilots, and aircraft.”

As the syllabus evolved and more UK personnel arrived, the American and British members of VMFAT-501 worked in unison so everyone could efficiently operate and maintain the F-35B. The UK’s goal is to achieve initial operating capability in a land-based role for the F-35B in 2018 and aboard the HMS Queen Elizabeth aircraft carrier in 2020.

“617 Squadron has worked tirelessly for the past few weeks and months to prepare the aircraft to bring them to their final home of RAF Marham,” said Ground Capt. Cab Townsend, RAF Marham Station Commander. “It is a brilliant time for 617 Squadron to return to RAF Marham as the RAF enters its 100th year representing a transition from current to next generation combat air power.”

While the departure of 617 Squadron is a major accomplishment for the F-35B program, their expertise and professionalism will be missed throughout VMFAT-501.

“Professionally speaking, the collaborative approach between our services in the conduct of daily organizational level maintenance and flight training has set the tone for future combined operations,” Said Levine. “On a personal level, I had the opportunity to once again work and fly with Officer Commanding 617 Squadron, Wing Commander John Butcher. Butch had served as an exchange officer at Marine Fighter Attack Training Squadron 101 flying the F/A-18 Hornet while I was the Training Officer. At the time, we worked closely together training the Marine Corp’s newest strike fighter pilots.

“Fast forward to 2018, the [VMFAT-501] Warlords, and the F-35B, Butch and I once again have the privilege of sharpening the blade for the next generation of Royal Air Force, Royal Navy, and Marine Corps Fighter pilots. I wish him and the Dambusters of 617 Squadron the best of luck as they begin to stand up in the UK. Simply put, the command is more effective in all aspects because of our UK partners.”

The aircraft returning to the UK represents the transition from current to next generation air combat power for 617 Squadron.

We have visited RAF Marham and RAF Lakenheath, and clearly both with the ability of the Marines to work off of the Queen Elizabeth and the USAF from RAF Lakenheath, the F-35 is opening a new era of UK and US airpower collaboration.  And with the Nordics also as F-35 partners, the role of the F-35 in Northern Flank defense will be significant.