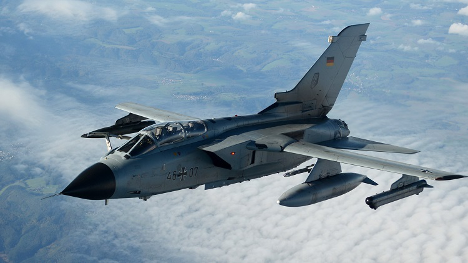 Recently, the defense press has asserted that the German government has approved a mixed buy of Boeing F/A-18E/F Super Hornets, EA-18G Growler electronic attack aircraft, and Eurofighter EF-2000 fighters for the Luftwaffe to replace its remaining fleet of 90 Panavia Tornados.

Even though the defense press has announced this, the German government has not. Even more to the point, Germany will see an election, a new Bundestag, a new Defence Committee within the Bundestag, and the ever-challenging budget process to sort through all of this.

Nevertheless, the prospect is an intriguing one and raises a number of key questions.

How will the German government play out its nuclear policy in the years ahead?

How will its new nuclear capable aircraft dovetail with those other members of the nuclear club in Europe who will be flying F-35s?

France is not part of the integrated nuclear club within NATO, but how will the German engagement mesh with any evolving French nuclear policy?

The Growler buy is interesting on many levels.

At the International Fighter Conference 2019, a senior Luftwaffe officer made it very clear that the EW mission was a central one for his Air Force.

At the same conference, Eurofighter made a splashy announcement of their EW build out of their aircraft. Obviously, the Luftwaffe preferred a flying aircraft to a briefing chart version of the Eurofighter.

What made the Luftwaffe go down the Growler route?

Then there is the question of partners.

The only force which flies the Super Hornet and the Growler other than the US Navy is the RAAF.

Might new partnerships emerge from the Luftwaffe operating the Growler, up to and included working on Australian training ranges?

The Eurofighter modernization is also interesting.

Much of the technology envisaged in the “new” version of the Eurofighter already exists on the RAF’s aircraft.

Does this presage a closer working relationship between the Luftwaffe and the RAF in shaping the evolving Eurofighter fleet, up to and including participation in Tempest?

And Germany and project Tempest is interesting to think about, for the project is more about leveraging 4th/5th generation aircraft and shaping the way to 6th generation than building a new fighter.

And with SAAB’s as well as the Italian’s participation in the project, this looks more like a renovated Eurofighter coalition than anything else.

And then what are the implications then for FCAS?

At a minimum, the Germans would expand their options and enhance their position vis a vis the French in shaping a way ahead for 21st century air combat.

Other questions are posed by one user of the Super Hornet, namely, the RAAF.

Former Chief of Air Force, Air Marshal Brown has highlighted that the shift from the Hornet to the Super Hornet was a significant one as the RAAF was faced with the challenge of handling securely a data rich aircraft.

Working through those security and data managing aspects of the aircraft could provide a useful learning curve for the Luftwaffe going forward.

And Brown provided another interesting aspect of where the learning curve might help the Luftwaffe as well.

“With regard to the Growler, it is not about flying with the F-35 as far as the Growler is concerned, for the F-35 clearly does not need it; but the Growler can be and will be used in many other situations. Also a two seat aircraft has the advantage of being able to evolve it’s roles to take far more advantage of second seat.

“We do not need pricey UAVs, which look like manned aircraft; we need cheap expendable assets. And the Super Hornet as a two seat aircraft can evolve into a good asset to launch and control such assets, or to command assets launched by other aircraft as well.”

Andrew McLaughlin in his story published on April 22, 2020 by ADBR provided an overview on the press reports about the German potential buy of a package for the Tornado replacement.

An April 22 report in Der Spiegel says Germany will acquire 30 Super Hornets to conduct the NATO tactical nuclear mission currently assigned to the Panavia Tornado, and 15 EA-18Gs to replace its Tornado ECR EW aircraft. Germany is also looking to replace up to 80 early-build Eurofighters with new aircraft with vastly enhanced capabilities.

While European NATO alliance members are not nuclear powers themselves, they are obliged to assign a limited number of aircraft and crews to be certified for the tactical nuclear mission in support of possible NATO operations against Russia.

The Super Hornet buy is considered controversial in Europe, with local industry advocating hard for European-built aircraft. But the Eurofighter has not been adapted for the nuclear mission, and is unlikely to be certified to do so by the US which provides the weapons to the alliance.

But while the US-built Super Hornet would be certified, it has not yet conducted flight and clearance testing of the B61 free-fall weapon, although this is reported to be imminent.

A German Super Hornet would also be capable of performing complex maritime strike missions in the relatively crowded Baltic Sea. The German Marineflieger relinquished that role in 2005 when it transferred its remaining Tornados to the Luftwaffe.

Germany already has a close military working relationship with the US DoD. Apart from its NATO ties and a number of USAF and Army units being based in Germany, the Luftwaffe has had a squadron of F-4F Phantoms, then Tornados, and now Eurofighters based at the German Air Force Tactical Training Center (TTC) at Holloman AFB in New Mexico.

The Tornado ECR is operated by Germany and Italy, and has undergone a number of improvements since entering service in the 1980. But despite it remaining quite capable, the airframes are becoming increasingly costly to sustain and operate. If the Luftwaffe acquires Super Hornets, as happened with Australia, it opens up an approval process and an economical sustainment path to operate the EA-18G which shares more than 95 per cent systems and structural commonality with the F/A-18E/F.

Germany operates the Multi-national Aircrew Electronic Warfare Tactics Facility (MAEWTF), or ‘Polygone’ ranges with the US and France in the country’s southwest, giving it an advanced EW training range on home soil it can use with allied and against dissimilar systems.

In order to provide its Growlers with complete data sets/libraries, Germany will likely have to establish a data centre in the US in conjunction with the US Navy, similar that operated with the RAAF at Point Mugu in California.

German Super Hornets will likely be of the new US Navy Block III standard as Block II production has ended, but Growler production is yet to switch to Block II which incorporates 5th gen system equivalent to the F/A-18E/F Block III.

The original Tranche 1 Eurofighters operated by Germany and other European nations entered service in the late-1990s. But Trance 1 is rapidly being overtaken in capability in the region, and are not considered to be economical nor structurally suitable to be upgraded to the latest Tranche 3+ standard.

Editor’s Note: We are working on a proprietary report (not for publication) on the issues raised in this article and if readers are interested in purchasing the report, they can write us directly at [email protected]