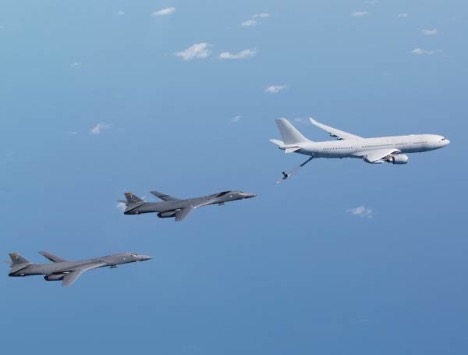 A pair of USAF B-1B Lancer bombers flew over Darwin on November 8.

The B-1B crews flew planned emergency diversion familiarisation training at RAAF Base Darwin after making the 6400km journey from Diego Garcia in the Indian Ocean.

Their mission included training with RAAF aviators flying a P-8A Poseidon and a pair of KC-30A multi-role tanker transports.

The activity built on the AUSMIN 2021 commitment to continue enhancing military cooperation and interoperability between the two nations.

It comes just before the 10th anniversary of the announcement of the first US Force Posture Initiative in Australia, including the Marine Rotational Force – Darwin and enhanced air cooperation, and during the 70th year of the ANZUS Treaty.

“This mission provided RAAF and USAF aviators with an important opportunity to demonstrate their professional mastery and exercise their interoperability in challenging and realistic conditions,” AIRCDRE Chappell said.

“It also provided the personnel assigned to the RAAF and PACAF [Pacific Air Forces] air operations centres with an opportunity to further enhance our interoperability to coordinate, plan, and oversee the execution of these missions from headquarters more than 8000km apart.

“We did all of this without ever having met face-to-face.”

Commonly called the ‘Bone’, the B-1B is the backbone of America’s long-range bomber force and can carry a conventional payload of up to 34 tonnes of guided and unguided ordnance.

RAAF aviators often train with USAF B-1B crews, including during last year’s regional presence deployment to Guam, and since 2017 as part of the Enhanced Air Cooperation program in Australia.

“While we have conducted similar long-range training activities together in the past, this activity differed in the multiple interoperable mission sets being rehearsed,” AIRCDRE Chappell said.

“The allied crews integrated to execute important training and air-to-air refuelling mission sets over several hours and many thousands of square kilometres. We also provided our US allies an important opportunity to familiarise themselves with one of their emergency diversion bases.”

During the mission from Diego Garcia, the B-1Bs rendezvoused over the Timor Sea with the RAAF KC-30A multi-role tanker transports from 33SQN at 30,000 feet. Each KC-30A offloaded 58 tonnes of fuel in about 25 minutes of contact time, providing the B-1Bs with the range to complete their mission.

The B-1B has become a more frequent sight for air refuelling operators at 33SQN, who have refuelled the bomber in recent years in Australia and the west Pacific.

FLTLT Byron Miles-Ward, an air mobility officer with 33SQN, said it was his first time refuelling a B-1B.

“Plugging into such a unique and impressive aircraft for the first time was a thrill. The B-1B is a surprisingly large aircraft when viewed from the KC-30A’s vision system,” FLTLT Miles-Ward said.

“The task of flying four large jets in close proximity for 25 minutes while transferring fuel requires precise coordination and skilful flying. There was still time for us to also swap stories and chat between the crews.”

For the next stage of the mission, a RAAF P-8A Poseidon from 11SQN provided a detailed surveillance picture for the B-1Bs to execute dry training runs in the Joseph Bonarparte Gulf.

The B-1Bs then flew over Darwin and conducted the planned emergency diversion familiarisation training to RAAF Base Darwin. The exercise builds upon the regular and increasing interaction between Australia and the US and sets the scene for expanded force posture initiatives.

“It provides the opportunity to train alongside our allies, improve interoperability and reinforce the partnership between our countries,” COL Coleman said.

“The RAAF is a tremendous mission partner we’ve had the privilege of working with multiple times.

“Bomber Task Force missions in support of IndoPacific Command’s objectives have provided us the ability to demonstrate the dynamic employment capabilities of our bomber force, and in conjunction with our allies, promote peace and stability in the region.”

This article was published in the RAAF’s Air Force Newspaper on November 25, 2021.