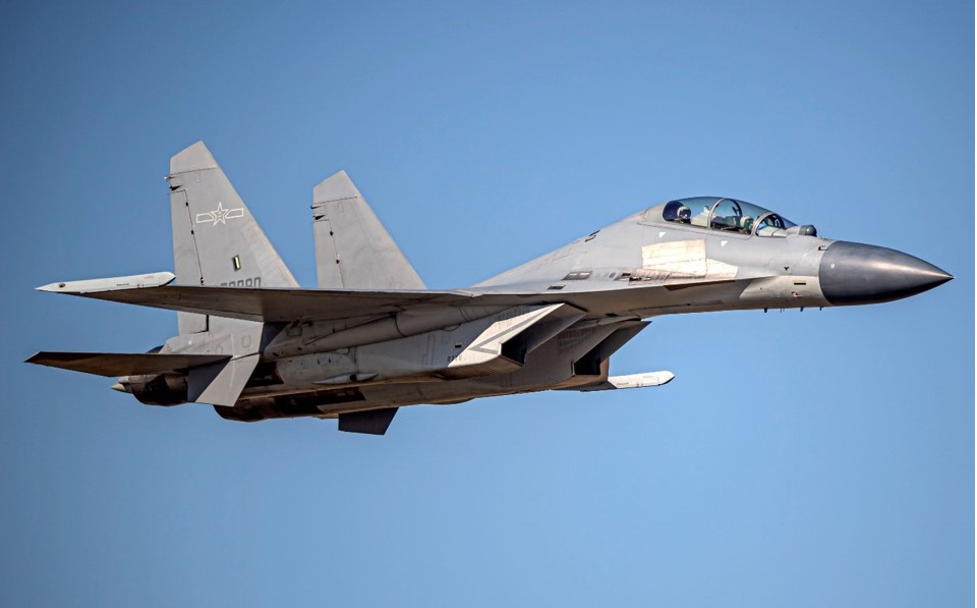 On 26 May a J-16 fighter aircraft from the Peoples Liberational Army Air Force conducted an ‘unsafe’ interception of an Australian P-8A Poseidon routine surveillance flight above international waters. The Chinese fighter pulled alongside releasing flares, then cut in front of the Royal Australian Air Force aircraft and released ‘chaff’—aluminium fragments to decoy incoming missiles. Chaff is familiar to audiences for its frequent appearance in the movie Top Gun: Maverick.

Only hours after the encounter, a second RAAF aircraft returned to patrol the area indicating that Australian forces had not been deterred from continuing their operations. This flight was not contested.

Between 26 April and 26 May, a Royal Canadian Air Force CP-140 Aurora patrol aircraft was similarly dangerously intercepted by Chinese aircraft in violation of air-safety norms, while flying in international airspace near the Korean peninsula as part of UN-sanctioned Operation NEON.

These air intercepts, and previous incidents, including the use of a laser by a Chinese vessel to dazzle the crew of another RAAF P-8 over the Arafura Sea in February, have been condemned by Australian leaders as aggressive acts. Harassment of foreign aircraft and vessels has become commonplace and appears to be increasing. This strongly suggests that rather than being regrettable but isolated ‘accidents’, a more deliberate ‘design’ can be discerned behind Chinese actions.

A closer look at the recent Australian case may reveal why this intimidation is occurring.

At the tactical level, it has been argued by some that the Australian case could be the work of a ‘rogue pilot’—perhaps overzealous in protecting China’s declared sphere of influence from foreign incursions. This is possible, but it would then appear that the Chinese armed forces have quite a few ‘rogue operators’, something unlikely to be tolerated in a rigid authoritarian system like China’s, or a military presumably dedicated to upholding professional standards. At any rate, the pilot’s deliberate discharge of chaff cannot be considered an ‘accident’ in and of itself, even if it was not explicitly ordered by his/her commander.

At the operational level, perhaps a permissible environment has been approved for pilots engaged in such intercepts that sanctions such risky behaviours—in this ethos: ‘accidents will happen’ and will not attract punishment for the perpetrator. Are they now part of PLAAF standard operating procedures and rules of engagement? Certainly a pattern appears to be emerging, rather than a series of unlikely coincidences.

At the strategic level, if a permissible environment has been approved, that would suggest it forms part of a coordinated strategy across service branches and in different subregions to use hybrid means of warfare. This looks more credible when one recalls Chinese strategists’ interest in such below-kinetic-threshold activities, informed by Sun Tzu’s famous maxim appertaining to the art of fighting, without fighting (to paraphrase). By this stage, deliberately ‘designing accidents’ like this, looks more convincing.

Last, at the political level, while the Chinese military has shown a measure of independence from policymakers in the past, the tight rein of the Chinese Communist Party under Xi Jinping may suggest that such a strategy—the sanction of operational procedures that permit such tactics—implies that this behaviour is approved at the very top. This assumption—reasonable to the extent that the CCP’s authoritarian system has exceptionally tight control of events, most especially in matters concerning the South China Sea—necessarily ascribes a high level of coordination and efficiency within the system (a misperception applied to the Soviet Union in the past). Given that the communist system remains a ‘black box’ to outsiders, we have no way of knowing for certain. Alternatively, the fact that the dangerous intercept occurred when Chinese diplomats were pressing for a ‘reset’ in bilateral relations with Australia could be read as ‘the right hand doesn’t know what the left hand is doing’.

For Beijing, the beauty of such seemingly contradictory activities, military provocation combined with diplomatic denial and putative olive branches, might suggest more than a tactical ‘accident’ by a rogue pilot, but rather a ‘designed accident’. That would be plausibly (or implausibly) deniable but nevertheless discombobulating for the recipient of such mixed messages. Rather surreally, Chinese officials have both retorted that ‘the measures taken by the Chinese military were professional, safe, reasonable and legal’ and then accused Australia of ‘dangerous and provocative acts’.

If such nominal ‘accidents’ are part of a carefully controlled posture sanctioned all the way to the top of the hierarchy—either actively approved or simply passively tolerated—what’s the purpose?

Destabilisation of the target. Uncertainty is achieved by the appearance of various theories, none of which can be conclusively verified as true and therefore dealt with appropriately and categorically by policymakers. Add to this a heavy dose of disinformation to further muddy the waters and create doubts and this leads to a degree of policy paralysis for the respondent.

It places the onus the target country to escalate in response and/or risk further incidents by continuing with such patrols, and Beijing clearly feels confident that this would be unpalatable or infeasible, at least for countries like Australia (and Canada). In China’s view, they can be counted upon to blink first in a game of brinksmanship, just as intended. The clearance of a second flight hours after the chaff incident indicates that Australia may not be playing the game as scripted.

There may be pitfalls in the strategy of ‘designed accidents’ in the sense that they are inherently dangerous and may lead to real rather than theatrical incidents. The Australian crew of the P-8, upon witnessing the activation of a (defensive) weapon system by the Chinese interceptor, may have responded to a ‘combat’ situation (the P-8 is not suitably armed to respond, but in other cases this may not be the case). Equally worrisome, due to the ingestion of the chaff fragments into its engines, the P-8 could have been downed by the encounter leading to casualties and/or an ensuing diplomatic crisis (like the Hainan Incident in 2001 in which a US EP-3 surveillance plane was brought down after an accident involving a PLAAF J-8 interceptor, whose pilot was killed).

Ultimately, how we view this incident—whether accident or accident by design—will lead us to different conclusions ranging from: ‘some Chinese pilots are reckless mavericks’ through ‘the Chinese military is adopting a riskier posture on purpose’, to ‘the PLA high command, with the approval of party decision-makers, has crafted a deliberate strategy that extends to the minutiae of tactical operations’.

Whatever the accidental, deliberate or unintended effects of such activities by Chinese armed forces, tensions will be raised accordingly. That will confirm the worst fears of strategic planners in Canberra, Ottawa and elsewhere, and drive more robust (and probably combined) responses.

Thomas Wilkins is a senior fellow at ASPI