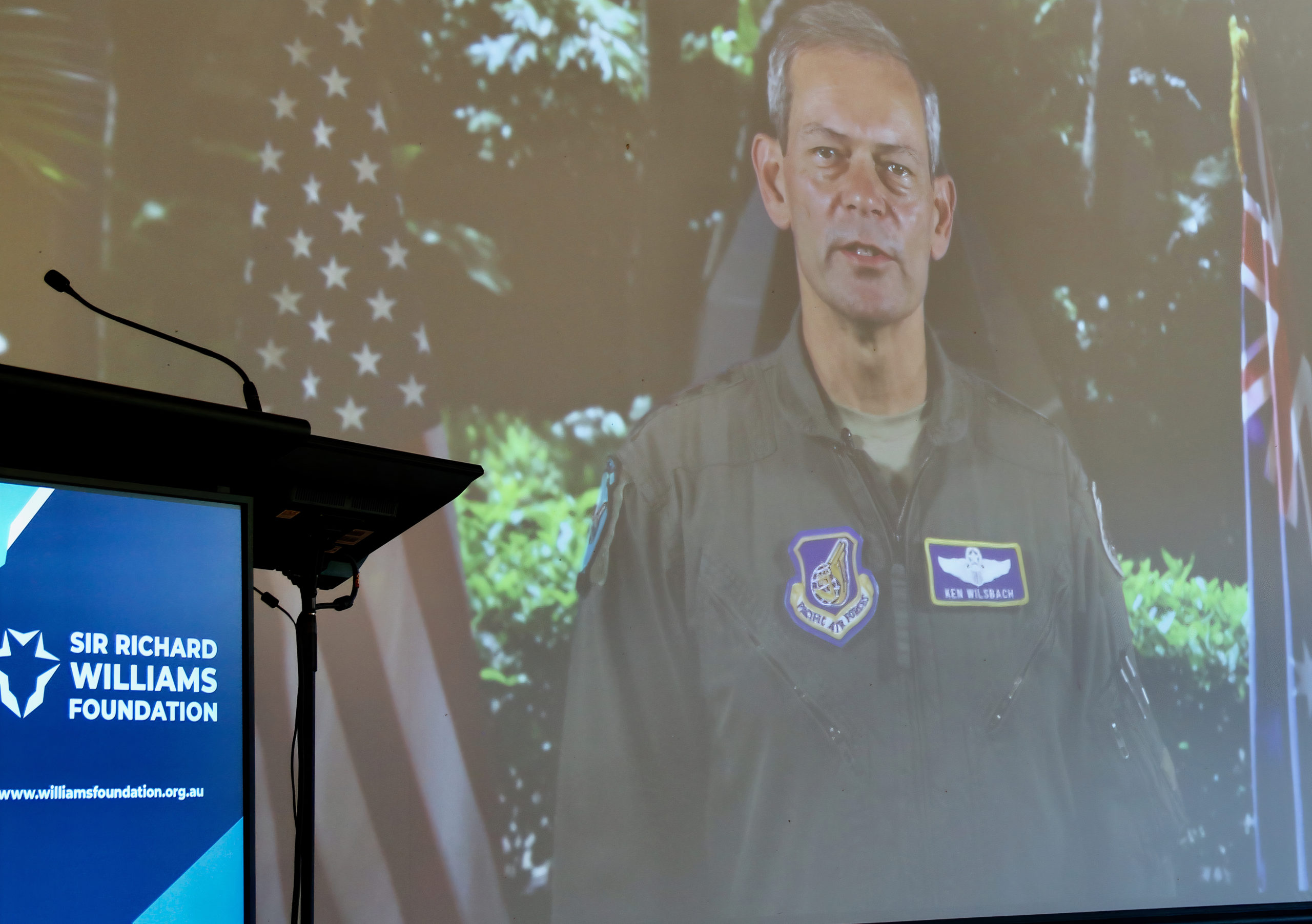 The September 28, 2022 Williams Foundation Seminar held on September 28, 2022 focused on “enhancing the lethality and survivability of the integrated force.” Although he could not physically attend the seminar held in Canberrra, Australia, he provided a comprehensive pre-recorded video discussion of the topic.

When the seminars held by the foundation began in 2018 focusing directly on the strategic shift from the land wars to building the resilient and longer range force for deterrence in the 21st century, General Wilsbach, then Commander of the 11th Air Force, provided his assessment of the challenges facing the U.S. and the allies in the Pacific region moving forward.

At that seminar, he highlighted a key element for the way ahead, namely, force distribution of airpower, and he introduced what he would later call agile combat employment.

“From a USAF standpoint, we are organized for efficiency, and in the high intensity conflict that we might find ourselves in, in the Pacific, that efficiency might be actually our Achilles heel, because it requires us to put massive amounts of equipment on a few bases. Those bases, as we most know, are within the weapons engagement zone of potential adversaries.

“So, the United States Air Force, along with the Australian Air Force, has been working on a concept called, Agile Combat Employment, which seeks to disperse the force, and make it difficult for the enemy to know where you are at, when are you going to be there, and how long are you are going to be there.

“We’re at the very preliminary stages of being able to do this but the organization is part of the problem for us, because we are very used to, over the last several decades, of being in very large bases, very large organizations, and we stove pipe the various career fields, and one commander is not in charge of the force that you need to disperse. We’re taking a look at this, of how we might reorganize, to be able to employ this concept in the Pacific, and other places.”

Then at the first seminar of 2022, General Wilsbach attended once again a Williams Foundation seminar.

At that seminar, the General described how his command is reshaping the force from a legacy sequential strike and defense force to becoming a kill web force, able to operate at the point of interest and to be able to reach back to joint or coalition assets to create the desired combat or crisis management effect.

“How do we intend to create such a capability?

“First of all, the U.S. intends to create a more networked force by reinvesting funding from legacy retirements, to into advanced military technologies through continued development of a robust and resilient command and control system and by ensuring joint and coalition interoperability across all domains….

“Additionally, we shouldn’t be flying fit generation platforms with third or fourth generation weapons. I believe we should be investing in directed energy as well as fifth generation munitions and beyond.

“And I’ve not been quiet about my advocacy of the E7, I believe this is essential for us. And as the original customer for the E7,  Australia fully understands the long-range surveillance communications and C2 capability E7 provides.

“Adding this additional platform to the U.S. fleet would increase our interoperability with the Royal Australian Air Force and we know the Australian teammates will be able to accelerate our learning curve on the E7….

“Our air force must focus on using information and technologies such as advanced computing and technologies, as well as artificial intelligence, integrating these into future military capabilities. Our next generation air dominance program is applying this methodology to the development of six generation aircraft that will possess the ability to survive, persist, and deliver lethal effects within the most challenging threat environments.”

At the September 28, 2022 seminar he expanded on the theme of agile combat employment and underscored the importance of mission rehearsal as a way ahead to shape the operational innovation necessary to deliver force distribution and integrated combat lethality.

At the outset of his remarks he underscored the importance of information sharing across generations of aircraft in the USAF as well as across the airpower coalition.

This is how he put the necessity for doing so:

“To gain and maintain air superiority, we must be able to freely share information across multiple generations of aircraft. We need to develop coalition data link networks within architecture such as Link-16 and F-35 multifunction advanced data link that maximize information sharing at the highest classification levels, and we need to operate daily within these networks to ensure we remedy crypto and design issues in the training environment instead of night one of combat operations.

“Intelligence sharing is a critical piece of the process, ensuring that we employ synchronized and accurate common electronic order of battle database files. If we cannot share intelligence and rapidly reprogram our platforms during a conflict, we will not be able to safely distinguish between friendly and hostile targets.

“This leads to a highly unfavorable situation, but one that can be avoided if each of us works to solve the bureaucratic issues our governments face with information classification and releasability. As a personal example here at PACAF, I receive an operations and intelligence briefing from my staff multiple times a week. Until recently, near the end of the brief, we cleared the room of any non-U.S. personnel to discuss our communication statuses across the theater because policy stated the information could not be shared.

“I thought it was absurd for our team to expect our allies and partners to go to war alongside the U.S. while at the same time conveying our inability to share critical information with the very people we invited to work on our staff. In turn, I directed my team to get the briefing to a releasable level without limiting the information presented, and they did. My point here is that we as leaders must look for every possible opportunity to enhance our interoperability through data sharing, whether that’s in the air via data links or in a briefing.

“We’ve been entrusted to inform policy and are charged to manage risk, relationships, and information. If policies and bureaucracies are getting in the way of valuable information sharing, it’s our job to eliminate the barrier and flatten the information curve.”

He returned in his remarks to the importance of shaping a distributed scheme of maneuver to enhance the survivability of the force but working ways to integrate the force to provide for the desired lethal effects which the force needs to deliver.

“We need to be able to work with our broad constellation of allies and partners to expand access basing and over-flight in support of dispersed operations across the Indo-Pacific. A changing modern operational environment requires us to adjust our schemes of maneuver. The PRC’s asymmetric arsenal includes missiles capable of striking the first and second island chains, and the tyranny of distance along with China’s geographic advantage provide additional challenges that we must overcome. Gone are the days of relying solely on our own permanent airfields.”

This then requires flexible and mobile basing which is what is meant by agile combat employment.

“One way the U.S. is responding to the challenges of PRC technological advancement is through continued refinement of the ACE concept. ACE insures we are ready for potential contingencies by enabling our forces to effectively operate from numerous locations with varying levels of capacity and support. Its heartbeat is a network of well-established and austere air bases, prepositioned equipment and airlift to rapidly deploy, disperse and maneuver combat capability throughout the region. As a coalition force, we must continue to expand our access, airspace, basing and resources west of the international dateline to better posture our sales to conduct distributed operations both during training and real-world missions.”

And this then led to really the core point of his presentation, the enhanced importance of training to enable the operations of an integrated distributed force.

This is how he put it: “Enhancing the lethality and survivability of our integrated force is a team effort, and it will take a collective approach to expand our footprint to support effective dispersal operations. History shows our crews are more lethal when they train alongside allies and partners against representative threats and environments they will encounter during combat.”

This means that “mission rehearsal” is a key part of building out such a force capability and further developing it in the years ahead.

“The U.S. understands the criticality of mission rehearsals and is committed to advancing our capabilities and modernizing our live and simulated programs to provide relevant training for tomorrow’s force. While live training will always be the cornerstone of airpower capability, the live environment is often constrained by the geographic limitations and technological improvements of the adversary capabilities. These limitations require us to shift portions of our training to simulate the environments, allowing crews to fully test our capabilities and practice the tactics, techniques and procedures they will employ against at the service.

“There are times when the simulated environment will be the only arena where Air Force, joint and coalition units can rehearse together in realistic scenarios. And the U.S. is focused on making improvements to these systems to provide crews the opportunity to train against the full complement of current and future weapons systems… Ensuring the availability of real, relevant and dynamic mission rehearsal opportunities is all of our responsibility. We must challenge ourselves through realistic training scenarios. And should the turns fail, our coalition force must possess the interoperability, training platforms and systems required to win as a combat credible force.

“Working with our constellation of allies and partners to expand access, basing and overflight across the Indo-Pacific should be a high priority on all of our lists as integration, lethality and command and control do not exist without it.”