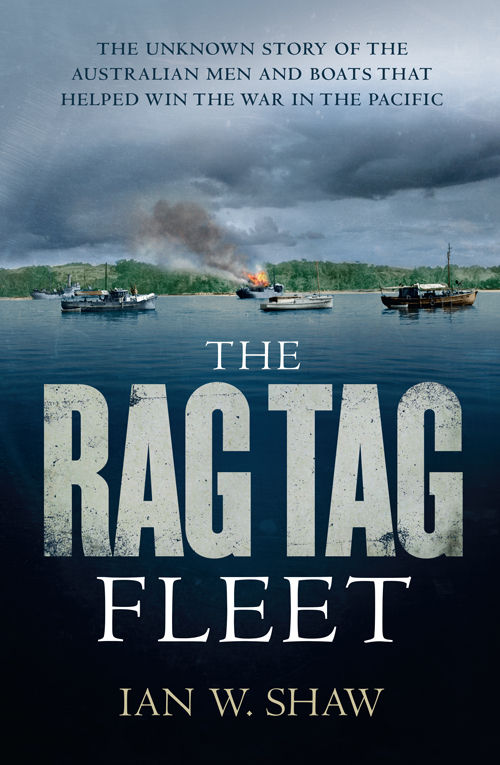 During one of my trips to Australia, I visited my favorite book store in Sydney, Dymocks, and purchased a signed copy of The Rag Tag Fleet.

The book tells a fascinating story about Australian citizens supported the war, and is a version perhaps not quite as dramatic of what the British did at Dunkirk.

It is a story of how a fleet of Australian fishing boats, trawlers and schooners supplied US and Australian forces in the Pacific in really desperate times.

In the words on the dust jacket of the book:

In this desperate situation, a fleet of hundreds of Australian small ships is assembled, sailing under the American flag, and crewed by over 3000 Australians either too young or too old to join the regular forces.  Their task: the bring supplies and equipment to the Allied troops saving bloody battles against Japanese forces across the South Pacific.”

The book starts with the fascinating story of the Fahnestocks, Americans who game to the Pacific as adventurers and ended up as the personal spies for President Roosevelt in getting an eye on what the Japanese where up to in the 1930s in the Pacific.

As the book starts, we are introduced to the Fahnestocks: “For young men who would never want for anything, the Fahnestock brothers certainly had a way of putting themselves into places where they could easily lose everything.”

When you start like that, it is easy to see why I read on.

The origin of the Small Boats effort was generated by an ArmyBG reaching out to the Fahnestocks.

“In January 1942, as the Fahnestock brothers were preparing and delivering their presentation to a sold-out crowd at the New York Town Hall, a regular US Army Colonel named Arthur Wilson was promoted to brigadier-general and made quartermaster for all the US forces that had been, and would be. dispatched to Australia and beyond to confront the Japanese forces still sweeping through Asia towards Australia.

“Wilson knew President Roosevelt, and it may have been through him that he first learned of the Fahnestock brothers and their plan….

“One day in late January, Sheridan Fahnestock received a cryptic invitation to a meeting backstage at the Washington Auditorium.  There, he found a US Army major sitting behind a plain desk.  The man insisted Sheridan to sit in the chair in front of the desk and then proceeded to question him on his knowledge of the Pacific, as well as his background and general thoughts on the war no raging in the Far East.

Seemingly satisfied with the answers, the major introduced himself as Arthu Wilson and said that he had been made responsible for australia, but didn’t provide any context for that statement.  Wilson then proceeded to ask Sheridan if he would be interested in commanding a small boats operation.”1

That is how it started. What the book then details is the story of how from this small beginning, Australians and Americans would work together to put together a very significant small boat effort to provide logistical support to Australian and American troops fighting the Japanese.

If one ever doubted the importance of logistics, that doubted should spend time examine the war in the Pacific. As courageous as the front line soldiers certainly were, the logistical support force was the key enabler of any combat force.

And in this case a “rag tag” fleet of small boats became the lifeblood of support in 1942 for American and Australian forces.

The courage and inventiveness of the Australians commanding and operating their small boats is provided throughout the narrative.

It is a reminder of how in times of crisis, any adversary should not underestimate the will and courage of either the Australian or American peoples.

We certainly have our ups and downs, but there is a basic community of interest and fellowship which no adversary should doubt.