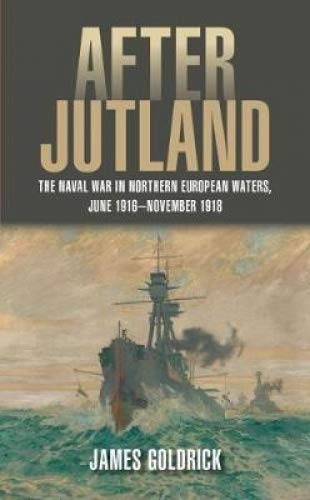 This book by James Goldrick, a retired rear admiral in the Royal Australian Navy, is a companion to his earlier book on Before Jutland.

What he does with his two books is to put the Jutland battle in perspective as a juncture where the fleets prepared for a battle like Jutland and the evolved their fleets, tactics and capabilities beyond the battleships to new approaches in the wake of the stalemate which Jutland provided.

The battle of Jutland was a naval battle fought between Britain’s Royal Navy Grand Fleet and the Imperial German Navy’s High Seas Fleet in 1916.

This was a battle prepared for by both sides focusing on the centrality of their battleships as the key capital ship within both of their fleets.

What Goldrick’s book focuses upon is the significant operational innovations which both sides generated post-Jutland which would lay the foundation for the fleets which would then meet again in World War 2.

Both sides found ways to combine air, small ships, and mines and counter mines into various engagements in the North Sea and the waters around the UK as both sides sought to choke off each others supply lines.

It was a period in which mine warfare became a key element, and which Zeppelins and air planes made their clear entry into the naval warfare calculus.

Today’s Western navies have tended to downplay the role of mine warfare but even in today’s world mine warfare is a key element of any conflict which Europe would have with Russia and it is crucial to keep mine warfare skills fresh and almost certainly deserve much more attention from the US Navy and allied navies as part of naval warfare as a whole.

Our colleague Murielle Delaporte spent three weeks with NATO mine forces and during her time at sea, the force continued to find mines from World War II and perhaps as well World War I.

The book is largely one for specialists and those who study naval warfare in World War I, but it does have significant lessons to be learned with regard to the evolution of fleets and of naval warfare.

Most notably, it needs to be realized how important operations are in driving innovation, and with it the shaping of concepts of operations.

The author underscored that it is not just about technological innovation but shaping new ways to use technology and to drive concepts of operation.

The author has a great line in the book referring to the British learning that plans are not operations, and as they focused on operations and combat learning derived from operations, the Royal Navy progressed.

He concludes with an important observation with regard to World War I innovation on what would become the fleets engaged in conflict in World War II.

“What is clear is that the operations of the royal Navy in 1981 in particular were a remarkable advance on 1914….

“They foreshadowed the task forces of the next global conflict.

“The ‘Grand Fleet of Battles’ which had been emerging before the Great War, had been replaced by fighting groups that had the same ideas of combined arms and mutual support but operated on a smaller scale that made the necessary coordination practicable.”1