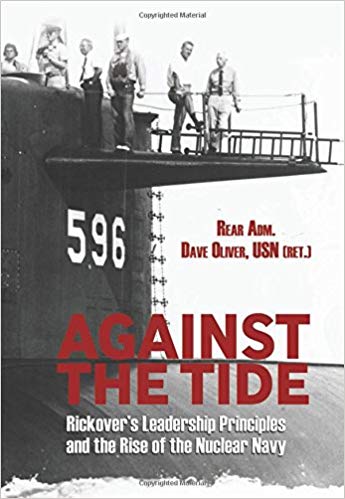 Growing up in Northern Ohio, one of my best friends from childhood eventually went to the Naval Academy with a clear desire to become an officer in the surface fleet. Then Admiral Rickover intervened and my friend became an officer in the nuclear submarine community.

He once described to me his meeting with Rickover and his interview.  Which turned out to be mercifully brief as being a young man meeting a legend was certainly an intimidating moment. But Rickover did make it so, and so my friend began his journey into the silent service.

That was one aspect of Rickover’s leadership – an ability to recognize talent, recruit it, and put talent into “his” service.

Rear Admiral (Retired) Oliver has written a book, which looks at Rickover’s legacy from the standpoint of the kind of leadership, which he provided.  Oliver himself a member of the silent service, describes throughout the book his own interactions with Rickover and shapes his observations on how Rickover led and how his leadership example might inform more generally about the nature of leadership of organizations, notably those undergoing fundamental change.

My own experience has been with the Aegis community within which significant top down leadership has shaped a globally unique capability as well.

Both the Aegis program and the building of the nuclear navy are certainly high points in US Navy leadership.

Oliver highlights how Rickover, not an imposing physical command presence, shaped such a significant transition, one crucial to the defense of the United States and the free world.

One of my favorite stories, which Oliver provides of Rickover, revolves around his practice of going on the test dives of a new nuclear submarine, certainly someone who might be risk adverse would not do.  But Rickover was not; and believed that this was part of his leadership responsibility.

Oliver describes his personal experience onboard George Washington Carver in it initial trials with Rickover onboard.

“We had been at sea three days and were finally down at the deepest depth Carver was designed to go….One particular torpedo skid had apparently become pinched  during the last two-hundred-foot descent.  Suddenly, the upper-level engine room watch stander discovered a stream of water gushing from his escaped trunk drain. This was trouble.

Oliver went on to note that normally they would have surfaced to fix the problem, but this would clearly have delayed significantly the first deployment of the submarine and delay its mission of replacing another SSBN nearing the end of its scheduled deployment.

“We first became aware of an alternative solution when Rickover, who at that time was sixty-six years old, stepped through the hatch into the engine room, a hammer in his belt and wooden fid in his hand.

“Where is the engineer he asked?

“Call the captain. Get permission to open the lower escape trunk hatch.  You and I will lock ourselves inside and fix whatever is wrong.”

“The admiral pretended as if he didn’t notice Folta’s astonished look.  “You there,” he said reading my name tag, “Oliver.”

“You will be the telephone link to the commanding officer.

“You can be the first person to tell him if we die in there.” 1

That my friends, is leadership by example and taking responsibility.

And that is what the book is about.

In short, Oliver has written a book which provides insights into Admiral Rickover as a historical leader but at the same time looks at this particular history for lessons learned with regard to the leadership function in general.