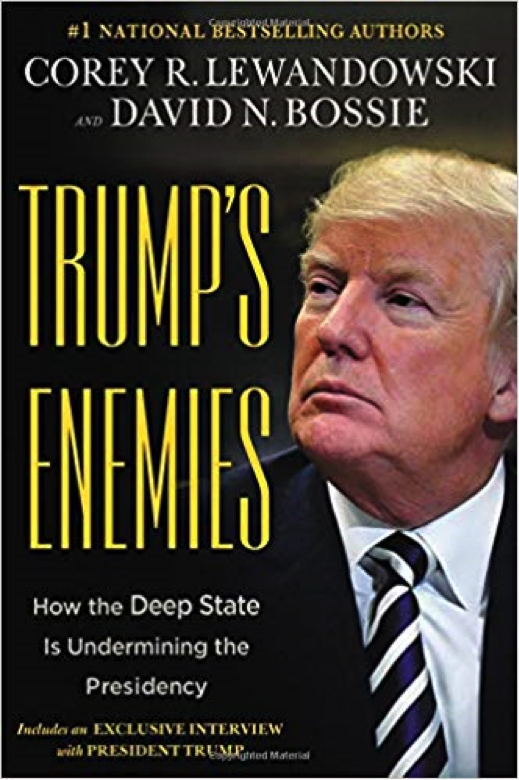 Corey Lewandowski and David Bossie have written an important book about the Trump Presidency.

They were critical participants in one of the most historic events in American history.

Their book is about the triumphs and setbacks of the campaign of Donald Trump to be elected the 45th President and then his governance for the first eighteen plus months.

First it is what is commonly known as a “good read,” because they take a very murky and complicated story about the President’s “Deep State” enemies and present names and events in an easy to understand linear narrative.

In other words, by presenting a linear time line with names and specific examples of individuals who have demonstrated disloyalty to Constitutional safeguards, they make what happened understandable.

The documented evidence they present makes the case that the Obama White House, the Intelligence Community and DOJ/FBI at the highest levels  along with Clinton Inc. political operatives both during the 2016 campaign and then into President Trumps first term used Intelligence/ Counterintelligence practices and procedures against innocent Americans, for political purposes.

They very specifically tried to destroy Donald Trump and his family.

The second important point of the book is simple, by naming names and giving specific examples, including a first person interview with President Trump they present to readers an easy to understand roadmap of indictments to come.

If one is identified unfavorably by name with specific examples of real crimes in Trump’s Enemies then those mentioned better “lawyer up.”

As President Obama recently boasted “…nobody in my administration got indicted,” ha- ha-ha,  not yet!

There is an important point to remember in our Constitutional process with the soon to be Democrat controlled House of Representatives, Congress doesn’t prosecute. The Incoming House leadership have made very public draconian threats of doing little legislating and significant investigating but can only go so far while the real Law Enforcement power Constitutionally rests with the Executive Department.

The Democrat House vs. The Trump Administration coming public fight will be very ugly.

The House will be supported by not only 90 % of the Media but if that isn’t enough many in the here-to-for credible media have already shown an additional proclivity of creating additional “fake news.”

President Trump’s first person interview in the book makes his views on that point crystal clear.

Congress doesn’t prosecute but the executive department does.

Since all American’s believe “no one is above the law” it will be interesting to see who is charged with felonies while the public strum and drang of the Democrat lead House of Representatives lusts for impeachment.

In addition, to the identification of friends and foes in the book it also segway’s into the beginning of building a legacy of very significant accomplishments of the Trump Presidency.

Those chapters are very important in putting a road map of accomplishments into the public domain, to foreshadow the reason why President Trump will deserve a second term.

Both men who were very important campaign aides brought to light that Donald Trump is actually superstitious and that trait serves him very well in never taking anything in the future for granted.

So enough about a second term let’s just say Cory and David serve the President very well in their building  a public record for him to be re-elected.

The third reason why to book works is that both men are what are known as original sources.

Many bestselling political books are written by reporters or directly by the principles, in a “see how smart and brilliant I am mode .”

But a book written by two individuals reporting on what happened as they lived it will be invaluable for future historians.

Trump’s Enemies, will be an original source document for generations of historians yet born.

Now for some payback:

The Department of Justice will take care of those who crossed a sacred legal line to use the power of the Deep State to subvert the Constitution.

President Obama, Attorney General Holder, NSC Director Susan Rice, DNI Clapper and a cadre of as yet unnamed White House staff directing the raft of punitive political actions by government agencies, and dissembling about it have forfeited the public trust by intentionally and systematically abusing it. These leaders need to be held accountable.

It is time to stop the out of control government before it is too late.

They even put a well-deserved cloud over the integrity of a Judge on the Foreign Intelligence Surveillance Court (FISA) thus ultimately putting Chief Justice John Roberts on the spot.

Legally he must address the demonstrated conflicts of interest with rogue “deep State” FBI personnel improperly connected to his court.

“Mister Chief Justice: You have a major problem”

Unfortunately, on the staffing of the incoming Trump/Pence Administrationfor all of us who were very early Trump Campaign supporters Cory and David pull no punches on documenting that many DC denizens took advantage in the early days of the Administration to essentially slime their way into power.

With candor the authors identify individuals they call the “November 9th“people.

What is even more insidious to the future success of the Trump Team are those that never supported Donald Trump are now in positions of significant political power to judge and keep out those who initially trusted the fairness of the first team into the White House lead by Chief of Staff Reince Priebus.

So we have a situation, especially in National Security, in that those who did not see the strategic vision of President Trump being in control of employing those that very early did, and that is the most important strategic vision test in building a safe and secure America.

Additionally, the  great tragedy in many Cabinet Departments and Agencies are again that those who did nothing to earn their positions are still keeping out a younger generation of true dedicated Trump campaign aides.

These younger men and women are the hope for the future to keep Trump Nation going forward by understanding firsthand how government truly works –or doesn’t.

Corey Lewandowski and David Bossie have written a book that will most definitely stand the test of time and should be on many books shelves both personal, in libraries and in Colleges and Universities, because —The Truth is The Truth.