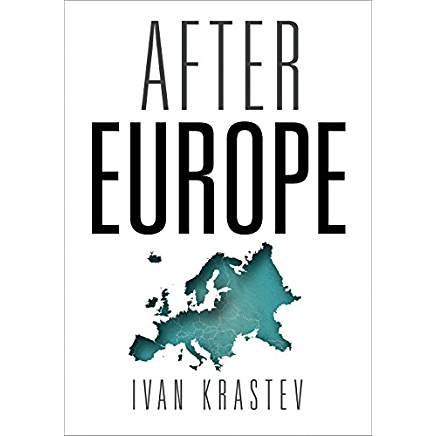 During 2019, we will be focusing in part on the crisis in Europe and its global impact.

We will be providing articles from the UK, France, Germany and other European nations as the European Union and NATO adjust to the dynamics of change.

And of course we will consider how the evolution of Europe affects US policies and options, and look beyond the extensive focus which the press puts on Trump and the Europeans to take a broader view of the transition.

In the course of so doing, we will review recent books on the European crisis which provide insights which can provide a foundation for our analysis and can aide our readers in sorting out their own thinking about the way ahead in Europe.

We will start this process by reviewing the 2017 book by Ivan Krastev, entitled After Europe.

The book provides a well written overview on how to look at the crises in Europe from the standpoint of the viability of the European Union and the various strategic challenges facing Europe which are driving change.

The author argues that the migration crises is at the heart of fundamental change within the European Union and he explains what he calls the East-West divided within Europe with regard to migration and how this affects the future of the European Union.

He adds: “It is the return of the East-West divide, more than any other political development, that fuels fears of a wholesale or even partial disintegration of the EU.” 2

Krastev argues that the European Union needs to deal directly with the legitimate concerns raised by many Europeans about internal security and development rather than simply taking a high-handed approach taken by many European elites that those who express this concern are populists who need to be ostracized and dealt with as if their concerns were illegitimate.

At the same time, the most extreme forms of populism need to be dealt with as well in terms of posing the threat of the Balkanization of Europe, something which clearly Is not in Europe’s interest.

In many corners of Europe, there is a growing anxiety that the populist wave cannot be reversed. On the day Donald Trump took his oath as president of the United States, the leader of the French Far Right Marine Le Pen proclaimed, “The European Union is dead, but it does not know it yet.”

Krastev adds: In reality, the union’s various crises, much more so than any of Brussels’s “cohesion policies,” have contributed to the sense that we Europeans are all part of the same political community.

In responding to the euro crisis, the refugee question, and the growing threat of terrorism, Europe has ended up more integrated than ever before, at least when it comes to economics and security.

The close study of the history of political disintegration reveals that the art of survival is an art of constant improvisation. Flexibility—not rigidity—is what may yet save Europe.

While most observers ask how populism can be vanquished, in my view the more apposite question is how to respond to its venality.

What will increase the likelihood of the European Union surviving is the spirit of compromise. Making room for conciliation should be the major priority of those who care for the union.

The EU should not try to defeat its numerous enemies but try to exhaust them, along the way adopting some of their policies (including the demand for well-protected external borders) and even some of their attitudes (free trade is not necessarily a win-win game).

Progress is linear only in bad history textbooks.4

The author has provided an important assessment of the challenges but also the way ahead for European development – the next phase of European development is not the same as the past twenty years.  A new path needs to be shaped and flexibility in reshaping its institutions is critical to its viability.

“Survival is a little like writing a poem: not even the poet knows how it’s going to end before it does.”5

Ivan Krastev (Bulgarian: Иван Кръстев, born 1965 in Lukovit, Bulgaria), is a political scientist, the Chairman of the Centre for Liberal Strategies in Sofia, permanent fellow at the IWM (Institute of Human Sciences) in Vienna,[1] and 2013-14-17 Richard von Weizsäcker fellow at the Robert Bosch Stiftung in Berlin.

He is a founding board member of the European Council on Foreign Relations, a member of the board of trustees of the International Crisis Group and is a contributing opinion writer for The New York Times.

From 2004 to 2006 Krastev was executive director of the International Commission on the Balkans chaired by the former Italian Prime Minister Giuliano Amato. He was Editor-in-Chief of the Bulgarian Edition of Foreign Policy and was a member of the Council of the International Institute for Strategic Studies, London (2005-2011).

His books in English include “After Europe” (UPenn Press, 2017), “Democracy Disrupted. The Global Politics on Protest” (UPenn Press, May 2014), “In Mistrust We Trust: Can Democracy Survive When We Don’t Trust Our Leaders”, (TED Books, 2013); “The Anti-American Century”, co-edited with Alan McPherson, (CEU Press, 2007) and “Shifting Obsessions: Three Essays on the Politics of Anticorruption” (CEU Press, 2004). He is a co-author with Stephen Holmes of a forthcoming book on Russian politics.