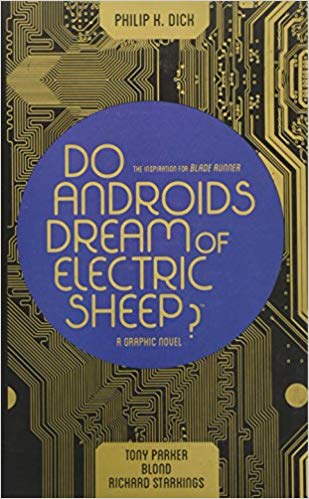 Carl Rhodes joins us to look at the artificial intelligence, autonomy, and human-machine teaming implications for Philip Dick’s 1968 book Do Androids Dream of Electric Sheep?

This book was originally published in 1968. The 1982 movie Blade Runner is based on this book, but only very loosely. The book presents a less optimistic view of the future than the movie.

The book starts by describing a bleak, post-World War Terminus world where a nuclear exchange occurred and ‘it had been a costly war despite the valiant predictions of the Pentagon and its smug scientific vassal, the Rand Corporation.’ Radiation filled dust continues to derange the minds of Earth’s survivors and ends up killing most animal species.

Those affected by the dust known as ‘special’ or less nicely as chicken-heads, they are not allowed to leave Earth or reproduce.

Humans work hard to care for the remaining animals, and a large trade in artificial animals has grown on Earth. Rick Deckard, the main character in the book, has previously had a living sheep housed on the roof of his building, but it died. As a result, his current animal is a machine (due to the high cost of real animals).

Most humans have left to colonise other worlds leaving behind few people on Earth. Androids are built to work as slaves on those colonised worlds. The book is primarily a detective story, with a bounty hunter, Deckard tasked with killing, i.e. ‘retiring’ six escaped Nexus-6 model androids.

Nexus-6 models are the most advanced and intelligent androids. One of the only mechanisms of telling these androids from humans is the Voigt-Kampff test, which measures emotional response, specifically empathy towards animals.

Over the course of the book, Deckard does the following things:

Kills the six androids he was assigned and collects the bounty;

Gets sent to a police station full of androids where he takes his own Voigt-Kampff test and is found to have empathy towards androids;

Sleeps with an android (Rachel Rosen), who is trying to trick him into feeling empathy for one of the Nexus-6 models that is a fugitive and looks identical; and

Seems to care far more about buying new animals (like a Nubian goat), rather than caring about his wife, job, or android lover Rachel.

The religion called Mercerism also makes an appearance in the book, based on the life of William Mercer. People have empathy boxes, and by holding its handles, one can share in the struggle of Mercer climbing a long hill to his death while being pelted with rocks. It is a collective consciousness where joy and pain can be share and androids are not able to take part. The religion is exposed as a fraud on TV (and Mercer himself agrees with the judgement), but nobody seems to care.

Regarding what this means for artificial intelligence, automation, and human-machine teaming:

What makes someone human? In this book, it is empathy. What would happen if androids were built to have empathy?

What about humans who express no empathy toward others or androids?

In the movie, human empathy for androids and android empathy for humans is built at the end in the ‘tears in the rain’ speech;

In the book, the story is bleaker. The androids torture a spider, for example, and Deckard’s primary goal in life is to go buy another animal;

Deckard and his wife own a Penfield mood organ, which allows a human to pick a machine generated mood for a certain amount of time. What are the implications for being human?

There are also questions of class in the book. John Isidore is a chickenhead but feels empathy that Rick does not. Both the chickenheads and the android slaves are lesser than the other humans, yet Isidore feels compassion for both living things and machines.

Dr Carl Rhodes is the Director of RAND Australia.

This article was first published by Central Blue on January 20, 2019.

Anastasia Lin at the Oxford Union Society: China is Already Engaging in a Cold War With the West

In this video MLI’s Ambassador on Canada-China Policy, Anastasia Lin, delivered a speech before the Oxford Union Society on April 8, 2020 as part of a debate on the following motion:…

The Space Force is negotiating with the Army and Navy to integrate many of their space-related personnel, functions and operations. “Their primary interest and area of concern is they want…