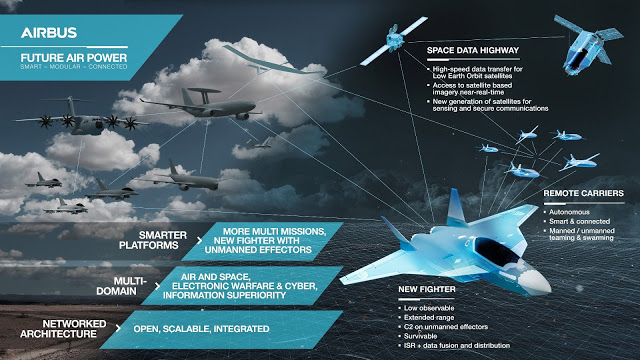 According to an Airbus press release on February 6, 2019, the launching of the joint concept study for the Franco-German Future Combat Systems program.

Paris / Munich, 6 February 2019 – France and Germany have awarded the first-ever contract – a Joint Concept Study (JCS) – to Dassault Aviation (stock exchange symbol: AM) and Airbus (stock exchange symbol: AIR) for the Future Combat Air System (FCAS) programme. The launch of the JCS was announced by the French Minister of the Armed Forces, Florence Parly, and her German counterpart, Ursula von der Leyen, at a meeting today in Paris.

The decision by both countries represents a milestone to secure European sovereignty and technological leadership in the military aviation sector for the coming decades. Starting date for the two-year study is 20 February 2019.

Eric Trappier, Chairman and CEO of Dassault Aviation, said: “This new step is the cornerstone to ensure tomorrow’s European strategic autonomy. We, as Dassault Aviation, will mobilize our competencies as System Architect and Integrator, to meet the requirements of the Nations and to keep our continent as a world-class leader in the crucial field of Air Combat Systems.”

Dirk Hoke, CEO of Airbus Defence and Space, said: “FCAS is one of the most ambitious European defence programmes of the century. With today’s contract signature, we are finally setting this high-technology programme fully in motion.

Both companies are committed to providing the best solutions to our Nations with regard to the New Generation Fighter as well as the systems of systems accompanying it. We are truly excited about having been given this opportunity and appreciate the trust placed in both our companies.”

This planned Next Generation Weapons System will consist of a highly capable manned “New Generation Fighter” (NGF) teaming with a set of new and upgraded weapons as well as a set of unmanned systems (Remote Carriers) linked by a Combat Cloud and its Ecosystem embedded in a System-of-Systems FCAS architecture.

The JCS is based on the bi-nationally agreed High Level Common Operational Requirements Document (HLCORD) signed at Berlin Air Show ILA in April 2018 between the Defence Ministers of France and Germany as well as respective national concept studies.

Its aim is to conceptualise the different FCAS capabilities and to pave the way for future design, industrialisation, as well as an estimated full operational capability by 2040. The study will prepare and initiate demonstrator programmes for launch at the Paris Air Show in June 2019.

In an interview last year done for Second Line of Defense, Pierre Tran talked with the Chief of Staff for the French Air Force who highlighted that the upgrade of the Rafale was viewed as a key step in the FAF’s approach to FCAS.

A planned F4 upgrade of the Rafale fighter jet will serve as technology demonstrator for network capability of the Future Combat Air System, said the Air Chief of staff, Gen. Philippe Lavigne.

“Studies are fine but we need a demonstrator to see if the technology works,” Lavigne told Dec. 4 the Defense Journalists Association.

“What’s important in the F4 is connectivity,” he added.

That connectivity, via data transfer through satellites and other communications systems, is at the heart of the “collaborative combat” concept, he said.

Upgrading the Rafale to F4 will allow the certification of technology which will be at “the heart” of collaborative combat, key to the planned FCAS.

It was also important to fly the Rafale with the F-35, now arriving in European air forces.

“I’d rather have the F-35 at my side rather than flying into me,” he said.

Asked about a pending contract for the Rafale F4, Lavigne said, “it is very important it is signed as it will be operational in 2025.”

Rafale F4 will be “a form of evolution,” he said, adding that the fighter in flight rather than just have studies it work on a computer on the ground. Flying the F4 will be the start of what will effectively be a communications server for FCAS.

The network connectivity will be a critical part of FCAS, allowing the aircraft to dialog with other aircraft and platforms, while ensuring the French sovereign autonomy to carry an airborne nuclear deterrent, he said.

One way of developing communications between FCAS and allied aircraft would be working through NATO Supreme Allied Commander Transformation, he said.

That office of the Atlantic alliance studies technology which could help allied forces.

The French and German defense ministers have said they back a joint approach and have a “common vision of the architecture of the future combat air system,” he said.

That is backed up with their plans to sign contracts for a demonstrator for a next-generation fighter and the engine, he said.

Key to FCAS will be future threats, delivering increased capability for area denial and anti-access, he said. That greater capacity can be seen now in the Middle East, modern Chinese and Russian fighters carrying new radars and missiles, and surface-to-air weapons.

There are also threats in space as well as jamming of GPS and communications.

Other than stealth and hypersonic speeds of Mach 5, 6 and 7, it is hard to forecast what technology will be available in 2040, he said. That difficulty of prediction applies particularly to communications technology.

There is an option of building a “sword stronger than the shield,” but the cost could be unacceptably highly, he said. Other factors to consider are stealth and enemies firing hypersonic weapons, “arriving very, very fast on you.”

Collaborative combat, seen as a way of dealing with potential future threats, rests on an aircraft firing and relying on another aircraft to guide the weapon to its target, allowing the pilot to leave the area, he said.

At the heart of the future system will be a next-generation fighter, which will be manned rather than unmanned, he said.

A manned aircraft reflects French pursuit of strategic autonomy, with an airborne nuclear deterrent along with submarine-launched ballistic missiles.

There will not be a robot flying an airborne nuclear weapon, for reasons of ethics, he said.

Naturally there will be artificial intelligence, with a start already made of merging sensors, he said.

There are French crews in Africa flying the Reaper UAV, rather than based at the Cognac airbase, he said. That differs from the U.S. as the French approach is to put “the crews closer to combat,” he added.

On interoperability of the Rafale with the F-35, he said there are operational and technological aspects.

On the former, the French fighter flew with US Air Force F-15 and RAF F-35 for the first time on the Point Blank exercise recently held in the UK.

There is confidence in opening up that interoperability, he said, adding that it is necessary to continue that trilateral cooperation.

Those trilateral Point Blank exercises are a way to boost operational interoperability, he said.

Lavigne, appointed Air Chief of staff Aug. 31, is a former fighter pilot, having flown combat missions in the Mirage 2000 in former Yugoslavia and in the first Iraqi war.

The French Army’s Scorpion modernization program drew heavily on the concept of collaborative combat in its plan to hook up armored vehicles and troops in a single command and communications network, dubbed Scorpion Information Communications System (SICS).