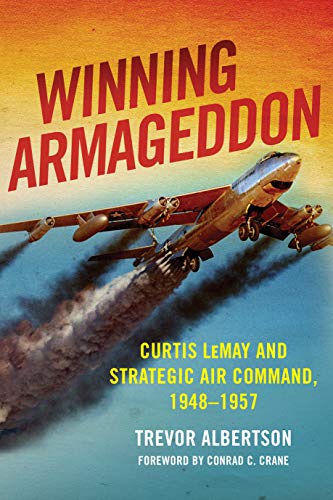 Trevor Albertson has written an important book reminding us of the nature of military leadership required for deterrence.

The book provides a detailed look based on primary documents of how a WW II military leader transitioned to the Cold War and focused the attention of the nation’s leadership on the seriousness of the new threat, nuclear war.

Le May built a new organization and shaped ideas, appointed first rate subordinates and focused on getting the planes, the weapons and the basing right so that SAC could conduct a pre-emptive strike if nuclear war was imminent.

He believed, correctly, that a repeat of Pearl Harbor in the nuclear age, would be catastrophic for the United States and needed to be avoided at all costs.

There is a key political point as we’ll — the importance of keeping a competent military leader in place long enough to shape an effective command and strategic outcome. We have seen that with two key US Navy programs, namely, the nuclear submarine and the Aegis fleet.

By having leaders in place for a significant period of term, the narrative, the strategy, the capabilities, and the key industrial-governmental relationships can be managed to deliver solid outcomes over a period of time.

Rather than the spurious discussions and feints towards acquisition reform, the Le May experience reminds us of the importance of selecting a competent leader, leaving him in place, and supporting him throughout a period of turbulence, which certainly the Korean War and the growing nuclear capability of the Soviet Union provided.

At the heart of success is having organizational design and leadership.

And in contrast the capability lowering notion of everyone participates and everyone is in charge, Le May had a very different approach.

In a 1948 note, this is what Le May had to say about organization and responsibility.

When you run up against a stone wall and you have to have help from Eighth Air Force or SAC, start screaming.

Don’t be satisfied with mediocre performances from my staff people.

All you have to worry about is fighting or getting ready to fight.

Nothing makes me madder than to have staff officers with directives from Washington to pass it on, instead of doing something about it themselves.

If staff is passing work on to combat units that they should be doing themselves, I want to know about it.

I think he might be in his own words, “madder” if he watched what is going on in today’s Inside the Beltway.