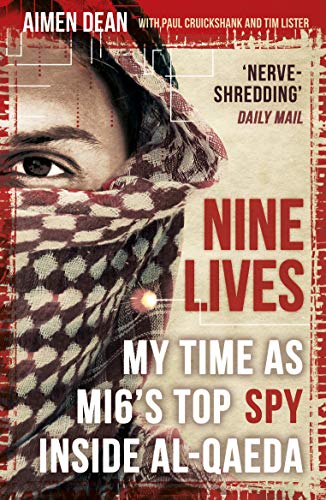 At the suggestion of Air Marshal (Retired) Geoff Brown, Chairman of the Williams Foundation, I recently read the book entitled Nine Lives.

He expressed to me that the book should be “required reading in the political domain.”

And after reading the book, his judgment certainly is well founded.

I rarely have read a book that has provided both a good read as well as providing a way in to understand the nature, challenges and way ahead to deal with the variegated challenges of the West dealing with militant jihad.

The book is truly unique.

To quote the book jacket: “As one of al-Queda’s most respected bomb makers, Aimen Dean rubbed shoulders with the mastermind of the 9/11 attacks and swore allegiance to Osama bin Laden himself.

“As a double agent at the head of al-Qaeda’s chemical weapons program, he foiled attacks on civilians and saved countless lives, brushing with death so often that his handlers began to call him their spy with nine lives.”

That opening alone would make one want to read the book.

But what one then discovers, when entering the world of the author, that one is challenged to revisit the history of our Western interaction with militant Jihad and the evolution of the Muslim world both in Europe and the Middle East.

In 1995, I wrote an article on the interaction between Europe and the Middle East in which it was clear to me that that we were looking at a dynamic two way street in which both Westernization as well as Islam were interactively challenging one another.

What the life of Aimen Dean and his narrative about militant Jihad underscores is how central this interaction has become to both the future evolution of Europe and the Muslim Middle East.

He goes as a 15 year old Bahraini to Bosnia to defend the Muslims being slaughtered by the Serbs. In fact, modern militant jihad has its origins in the mid-1990s in Bosnia.

Over time Europe becomes both a recruitment center and infrastructure for support for the militant jihadists who were generated during the Iraq and Afghan wars, and who then became the foot soldiers for al-Queda and ISIS.

He argued toward the end of the book, that the modern period of militant jihad can be understood as the evolution of three phases of development.

“With the explosion of terror attacks worldwide, jihadism has evolved in my lifetime.

“I was one of the youngest members of the first generation, which came of age in jihad agains the Russians in Afghanistan and among the mountains of Bosnia.

“The second generation emerged during the Iraq War.

“And now there is a third generation of often tech-savy youngsters, who have grown up amongst the carnage and upheavals unleashed since the Arab Spring and the ruse of far-right anti-Muslim extremism in the West.”1

From the perspective of someone inside the standing up and evolution of jihadism, the U.S. generated invasion of Iraq simply led to a very significant upsurge in recruits to the process and led to a rapid acceleration of its globalization.

As the author puts it: “the fiasco of the U.S. occupation of Iraq had become a recruiting sergeant for al-Queda.”2

From my perspective, the book can clearly be read as providing a clear understanding why the ill-fated attempt to do stability operations was clearly not only doomed to failure but enhanced the problem of dealing with the region.

On the one hand, inserting the United States as a permanent player in the Muslim Middle East has only enhanced recruiting the various radical Islam movements. The United States certainly can and should have armed forces in the region but to defend its interests and to support its allies, not to engage in the reshaping of the Muslim world.

On the other hand, the challenge of militant jihad is clearly an internal Muslim challenge in terms of the war of ideas.

The author, as a devout Muslim, argues throughout the book that jihadism is flawed ideology, one at odds with Islam.

And it needs to be challenged in these terms, something clearly not a good domain for players like U.S. forces to even be touching, and what is clearly part of what would be necessary for successful stability outcomes in the Middle East.

He discusses throughout the book, but most notably at the end, various ways this battle in the domain of ideas can be fought, and won.

But is clearly, it is not something I as an American am going to play a central role, to say the least.

How will the European debate and political resolution of migration and integration of Muslims best proceed?

How to deal with those Muslims who aspire to come or are already in Europe who have no interest in integration and have little in common with the secular values in Europe?

This means that although for the Middle East, sorting through the way ahead between Shia and Sunnis is centra for Muslims to sort out, the role of Europe and its secular culture will have its impact simply because of the challenge of working the integration challenge for the Muslims living and coming to Europe.

And that was what I argued in my earlier article about France and Islam with regard to the central challenge which secularism poses to the Muslim world.

The book is clearly essential reading to understand the dynamics of change in our world, notably with jihadism as a significant global driver of change.