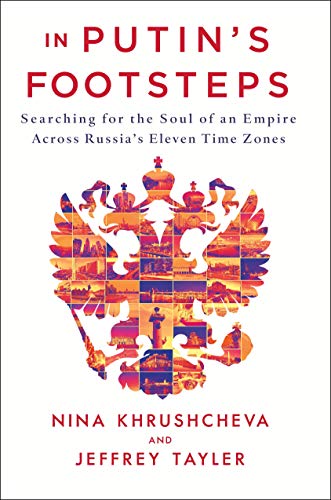 Although the Obama Administration referred to Russia as a “regional power,” with 11 time zones reaching from Europe to Asia, Russia is clearly geographically a unique Euro-Asian entity.

What Putin has done through his years in power has been to leverage the geography of Russia and its population’s historical memory to shape a narrative that is focused on the Russian destiny to be a great power, this time as a player shaping the next phase of the 21st century.

In their unique book entitled In Putin’s Footsteps, the granddaughter of Nikta Khrushchev and her co-author provided an assessment of Putin’s Russia in terms of the impact of geography. They have travelled across the expanse of Putin’s Russia and done extensive interviews throughout the country to provide a sense of how geography has shaped the Russian identity.

“Russia is a mutant, an oxymoron of geography, a self-enclosed empire defined by its central government and its rule over an extensive territory on which dwell dozens of peoples speaking many languages. However, Russian is the mother tongue of eight out of ten Russian citizens, and the lingua franca of virtually everyone.”1

This narrative highlights the importance of Russia as a unique geographical entity which enables the various regions to combine under strong state rule to play a unique role in the world.

With a strong state able to control a vast geography the Russians are able to shape their own destiny in spite of the asserted opposition of the global democracies to its way of life.

Putin and his team have cherry picked elements from Russian history to shape a narrative, which highlights the synergy between a strong state and centralization with the Russian way of life, and the unique Russian sense of civilization.

The keys to understanding Russia’s geopolitics, its people and its leaders, have been the nation’s faith—the stress on the communal rather than the individual in either Christian Orthodoxy or communist brotherhood—and its giant territory and what it holds.

With the collapse of the Soviet Union, Russia shed satellite nations in Eastern Europe and republics in the Baltics and Central Asia.

Abroad, it then began to be seen not as the center of a Eurasian civilization, but as an extension of the West.

The Putin decades, however, have changed that perception as Russia, once again, began to reimagine itself in civilizational, not just national or geographical, terms. The country that Barack Obama dismissed as a “regional power” after the Crimea annexation looks set to rival the United States. Not least because Russia, like the United States, occupies a “region”—a continent, actually—verging on two oceans.2

In shaping the narrative, Putin and his team have co-opted elements of history which would seem to suggest their opposites. With his third term as President, which began in 2012, the regime was increasingly intolerant of diverse viewpoints, but has worked to shape a process of osmosis where alternative historical views become incorporated in the increasingly official view of the world.

The authors in visiting the Perm-36 Museum, which was once a Gulag labor camp, and is located just outside the village of Kuchino 60 miles northeast of the city of Perm.  When the museum was established it was to underscore the excesses of Stalinism and of the kind of ruthless authoritarianism, which has pervaded Russian history.

The fate of the Perm-36 museum is, unfortunately, typically Russian.

Opened in the 1990s when Boris Yeltsin was eager to expose the horrors of Soviet totalitarianism, the establishment for two decades was affiliated with Memorial, a human-rights organization dedicated to keeping alive Russia’s history of political repression.

At the time, Perm-36 was more than just a museum; its mission was to inspire social consciousness. The site was a special one—it survived Khrushchev’s Thaw and was operational as a political prison into Brezhnev’s 1970s. The expositions contextualize how Perm-36’s inmates lived with displays found in its white-walled barracks, a hall used for meetings and showing films, a forge, a sawmill, and a repair shop.

A green watchtower overlooks its rusting barbwire perimeter, beyond which stretch empty fields and scraggly forest.

After Russia’s 2014 annexation of Crimea, the connections between Soviet repression and the modern Russian state’s current aggressive nationalism became too obvious to ignore. The museum was almost closed; its annual gathering devoted to human rights, Pilorama (Sawmill), ceased to convene after complaints of dubious sincerity from former prison guards and nationalistic Stalinists about its supposedly “antipatriotic” stance.

The Kremlin, however, decided that closing the Gulag site would only give ammunition to Putin’s critics.

So, instead the government took over Perm-36 as a historical project under the auspices of the Russian Ministry of Culture and replaced the museum’s Memorial founders with new state appointees.3

And with the seizure of Crimea, the Putin narrative of associating the authoritarian tradition with the defense of the Russian way of life became reinforced.

But following the Euromaidan protest movement in Kiev that led to the 2014 overthrow of Ukrainian president Viktor Yanukovych, a Putin ally, Russia annexed Crimea with a stealth invasion.

Announcing the annexation in March 2014, Putin insisted “in people’s hearts and minds, Crimea has always been an inseparable part of Russia.”

He thereby vilified Khrushchev—by whose action Russia was not “simply robbed, it was plundered.”

The speech set up a dichotomy that now stands at the core of Russian identity: strong-hand rulers like Putin or Stalin—those who collect Russian lands—standing against reformers like Khrushchev or Mikhail Gorbachev, who give them away. Kievan Rus, too, was eventually torn apart—Great Russia versus Small Russia (“Malorossiya,” an old Russian name for Ukraine).4

Russia is “coherently incoherent”—in other words, suffering from a split personality disorder. It is driven by its history. It is, for the most part, homogeneous politically, despite its geographic and even ethnic diversity.

Putin, no fan of revolutions, has kept alive, at least in bronze effigy on squares across the country, Vladimir Lenin, the Father of Revolutions…The Lenin statues stand for continuity, for the century during which Russia, in its Soviet incarnation, was a strong country, a superpower that made the world tremble.

Some Stalin images and statues—the bust in Yakutsk, for example—have been thrown in, to firm the memory and aspiration of that superpower status. Then there are the two monuments to Prince Vladimir we saw. The old one in Kiev, commemorating the Ukrainians’ own Prince Volodymyr. Another one in Moscow—the new statue, erected in 2016 on Putin’s orders and designed to stick it to the Slavic, formerly fraternal country to the south.

Even Ivan the Terrible (who famously “gathered”—or retook—Russian lands occupied by the Mongols in the Middle Ages) has been memorialized, with a statue of him raised in Oryol, a town about three hundred miles south of Moscow. These statues may well be understood as monuments to Putin himself—they represent strong leaders, leaders gathering age-old Russian territories and standing against enemies foreign and domestic.5

What will become of the Putin legacy going forward?

Putin, however, surely would like to enter the history books not as a dictator, but as the leader of a country he has guided out of impoverished backward chaos into modernity and relative wealth.

Modern Russia, he must know, cannot afford isolation, with one aspiring satellite, Serbia, and one alliance of convenience with China, along with a number of unsavory clients in Central Asia, the Middle East, and Latin America.

If Russia does become a monolithic imperial state, it will betray its true ambition—to fulfill its European aspirations of finally joining the modern world and becoming a part of the West.6

But this might well come at the cost of the 11 zone empire for the question clearly is raised by the Putin legacy: Does Russia need to give up its empire which is used to both justify authoritarian rule and to provide the resources for the centralized state to develop further?