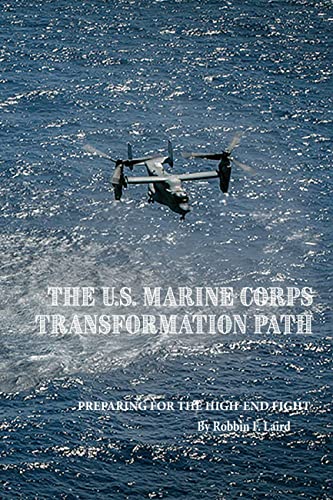 My first experience with Robbin Laird occurred almost fifteen years ago when I was assigned as the new U.S. Marine Corps Deputy Commandant for Aviation.

Facing the daunting task of introducing the MV-22 Osprey into combat operations, we deployed the first of three Osprey squadrons to Iraq beginning in the fall of 2007. Of course, our rabid and largely uninformed critics predicted abject failure and even I had to admit the stakes were extremely high.

During that tense period, one of the key intellects I turned to for advice was Robbin Laird. From that initial relationship grew a bond between Robbin and a succession of USMC Deputy Commandants (both Air and Ground) that helped the Marine Corps not only achieve incredible success with the Osprey, but also the F-35 Joint Strike Fighter, the Venom and Viper helicopters, and state-of-the-art command and control systems such as the TPS-80 G/ATOR radar.

So, what has Robbin’s main contribution been to the Marine Corps?

He always asks the right questions, and he is doggedly determined to examine new warfighting concepts and equipment — not just from the perspective of the upper echelons of the Pentagon, but from a broad cross section of tactical operators serving in the fleet. He interviews Marines who come to work every day with a passionate dedication to improving the Corps. They are always thinking, and sometimes struggling, to translate the ideas and equipment given to them in ways that take maximum advantage of the tools of their trade.

Sometimes all they need to excel is a knowledgeable listener who can help coalesce their thought processes into action and Robbin fulfills that niche perfectly. Unlike many of the “gotcha” defense journalists and think tank elites writing today, Robbin is happy to play the role of a facilitator who shines the spotlight on the active-duty sailors and Marines who are actually serving in the arena.

In this book Robbin uses this technique to explore three primary objectives.

First is the fact that Marine aviation has been at the forefront of post Iraq and Afghanistan operations for at least two decades. While the rest of the Corps was bogged down in small unit tactics and nation building, USMC aviation introduced capabilities that are ideally suited for 5th generation warfare and the potential near peer adversaries of the future.

Second is the sometimes-overlooked fact that the Marine Corps occupies the “vortex of the dynamics of change” being pursued by the U.S. Navy and the U.S. Air Force. Marines must not be myopic in how they envision their future contributions to the joint and combined force.

And, finally, he provides an examination of the 38th Commandant’s sweeping changes as delineated in Force Design 2030 (FD 2030). Almost everyone agrees that service wide transformation is required following two decades of stagnation and the evolution of new global strategic priorities, but the harshest critics of this new path believe “the cart has been put before the horse” and the future relevance of the Marine Corps is at stake. Robbin is careful not to join the chorus of Force Design 2030 naysayers.

Instead, he burrows into the thinking of those who are dealing with the coming changes and inspires them to think through the impacts – positive and negative — that lie off our bow.

In that way, this book contributes directly to a principal element of Force Design that is often overlooked because of the premature ax that has been taken to service end-strength and force structure (including cuts to infantry battalions, aircraft squadrons, tanks, and cannon artillery).

That is, that the transformation being thrust upon the Corps today must “rest upon a solid analytical foundation.” As John P. Kotter, Harvard Business School, is quoted on the opening page of the document, “Transformation is a process, not an event.”

After Former Navy Secretary James Webb blasted Force Design 2030 in an op-ed for The National Interest well over a year ago, there has been little intellectual curiosity or constructive criticism expressed by the defense establishment, including relevant members of Congress about the plan.

Is this because FD 2030 is so sound that it stands above criticism or is it because the changes, as eloquently described by Secretary Webb, will make the Marine Corps largely irrelevant?

Only time will tell how the Marine Corps navigates this treacherous transformation journey, but it’s not the equipment that will make the Corps successful on the future battlefield – it’s the Marines. Their imaginations, ideas and creativity will lead to innovative employment of the tools they are given.

That’s true of every piece of equipment in use today and it will remain that way in the future. The USMC Transformation Path: Preparing for the High-End Fight makes a valuable contribution to the professional dialogue that must occur by giving voice to those who are charged with managing the change.

The book can be purchased as well from our website:

By using the code USMC, there is a discount on the book as well.